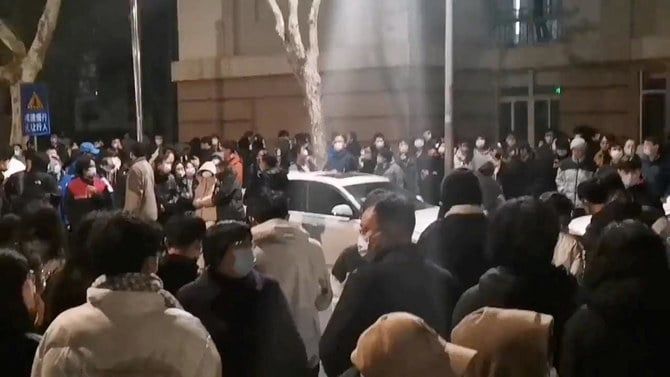 Students protested against a lockdown at a university in eastern China, highlighting continued anger as huge numbers of people across the country still face restrictions despite the government easing its zero-Covid policy.
Some Chinese cities have begun tentatively rolling back mass testing and curbs on movement following nationwide anti-lockdown demonstrations last week.

But analysts at Japanese firm Nomura on Monday calculated that 53 cities — home to nearly a third of China’s population — still had some restrictions in place.

Videos published on social media Tuesday and geolocated by AFP show a crowd of students at Nanjing Tech University on Monday night shouting demands to leave the campus.

“Your power is given to you by students, not by yourselves,” one person can be heard shouting in the footage. “Serve the students!“

A third-year student who asked to remain anonymous confirmed the protest took place, a day after the school announced it would seal off the campus for five days because of just one Covid case.

Chinese universities have restricted movement for months, with many requiring students to apply for permission to leave the campus and banning visitors.

The Nanjing Tech student told AFP her peers were unhappy about poor communication from the university and worried they would be blocked from traveling home for the winter holidays.

In the footage, the crowd can be seen arguing with university representatives and shouting for school leaders to step down.

“If you touch us you will become the second Foxconn!” one protester yells in reference to violent demonstrations last month in central China at a factory run by the Taiwanese tech giant that supplies Apple.

Other clips showed a police car arriving on the scene and university officials promising students they would compile their complaints in a file.

The Nanjing protest comes days after people took to the streets in multiple Chinese cities urging an end to the zero-Covid policy, with some even calling for Chinese President Xi Jinping to step down.

Hundreds gathered at Beijing’s elite Tsinghua and Peking universities at the end of last month as well as on campuses in the cities of Xi’an, Guangzhou and Wuhan.

Authorities have cracked down on subsequent efforts to protest while appearing to answer some demands by easing a number of restrictions.

On Tuesday Beijing said offices and commercial buildings including supermarkets would no longer require visitors to show proof of a negative test.

Major businesses and organizers of large-scale events will be allowed to devise their own testing requirements, authorities said.

Xie Shangguang, a 22-year-old student in Beijing, welcomed the changes as “good news” and told AFP he felt the capital was “coming back to life.”

“I have the impression that it will gradually ease up,” he said. “You can’t let everything go at once, or block everything at once, you have to proceed step by step.”

Another Beijing resident, 28-year-old Wu Siqi, also said the loosening should be incremental.

“You can’t just suddenly tell people they don’t need to do anything,” she said.

A host of other cities including Shanghai have dialled down mass testing mandates in recent days.

In the southern city of Guangzhou, officials began telling people to stay home if they have symptoms — a sharp about-turn from the previous approach of dragging all positive cases to central quarantine facilities.
#Covid
Add Comment