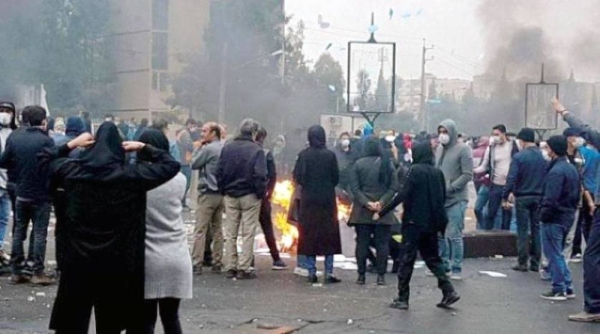 Signs of cracks within Iran’s government as protests endure

Unrest is enduring in Iran, with experts warning ‘cracks’ are showing within the embattled government, AFP reports.
Despite the regime’s fierce repression, involving hundreds of killings, mass detentions and four executions so far, protests are continuing in Iran, though in different forms and more sporadically.

“Revolutionary processes usually involve phases of relative calm and others of tumult,” said Ali Fathollah-Nejad, a political scientist at the American University of Beirut.

Though there has been a “relative decline” in the number of demonstrations, Iran is “at an impasse, neither the regime nor the demonstrators being able to impose themselves”, he continued, hinting further unrest as the country’s economic crisis deepens.

Protests were sparked by the death of Mahsa Amini on Sept. 16, 2022. The 22-year-old Kurdish woman died after being arrested by Iran’s so-called morality police for allegedly not wearing her hijab properly.

Protests soon morphed into a wider challenge to Iran’s Islamic government, which is deeply unpopular among large swaths of the population.

“With the considerable loss of value of the Iranian currency... one can expect demonstrations focused on the economy, which, as the past shows, could quickly become political”, said Fathollah-Nejad.

Millions of Iranians are being pushed to the brink, with the country’s currency taking a battering in recent months and years.

It dropped to a historic low of 370,000 Iranian rials to the US dollar in December.

Faced with violent oppression, strikes and other acts of resistance such as writing slogans or destroying government signs have increased, reports enqelab.info, which monitors protest activity.

“The national uprising is alive, although the way people express their dissent has changed due to the authorities’ deadly crackdown during [autumn],” enqelab said in a statement.

According to the Norwegian NGO Iran Human Rights, at least 481 people have been killed and at least 109 people are at risk of execution over the protests.

Four men have already been hanged. Authorities in Tehran say members of their security forces have also died. They denounce the protests are “violent riots” agitated by foreign powers.

The UN has also recorded some 14,000 arrests during the demonstration, which were initially against Islamic laws making it mandatory for Iranian women to cover their hair with a headscarf.

“But they are not over,” she continued.

In January, a massive rally took place outside Rajaishar prison in Karaj, near Tehran, amid rumors two protesters were to be executed. Both men are still alive.

The woman-led movement “changed the narrative the Islamic Republic has imposed for decades on Iranians, who they are and what they want,” Boroumand said.

However, there are few signs Tehran is ready to make significant concessions.

Repression may even intensify, with the appointment of Ahmad Reza Radan as head of the national police. He is a radical known for stifling 2009 protests against disputed elections.

Tehran’s brutal crackdown is pushing it even further from the West, putting any attempt at reviving the 2015 nuclear deal on ice.

Iranian authorities are also furious at the UN for launching a fact-finding mission into the crackdowns.

But divisions seem to be appearing within the authorities, while Tehran has not mobilized all its repressive paraphernalia, despite the bloodshed, according to observers.

Iran this month executed former Deputy Defense Minister Alireza Akbari, who had obtained British citizenship after leaving his post, for spying for the United Kingdom.

Cornelius Adebahr, a non-resident fellow at the Carnegie Europe research center, said this was an “unexpected verdict” possibly pointing to a “power struggle” among elites over how to handle the protests.

Alireza Akbari was seen as close to Supreme National Security Council Secretary Ali Shamkhani and other figures, who advocated for some reforms to address protesters’ grievances.

“There are signs of cracks” in power, added Fathollah-Nejad. This execution shows that “mistrust has set in among regime insiders”.
Add Comment