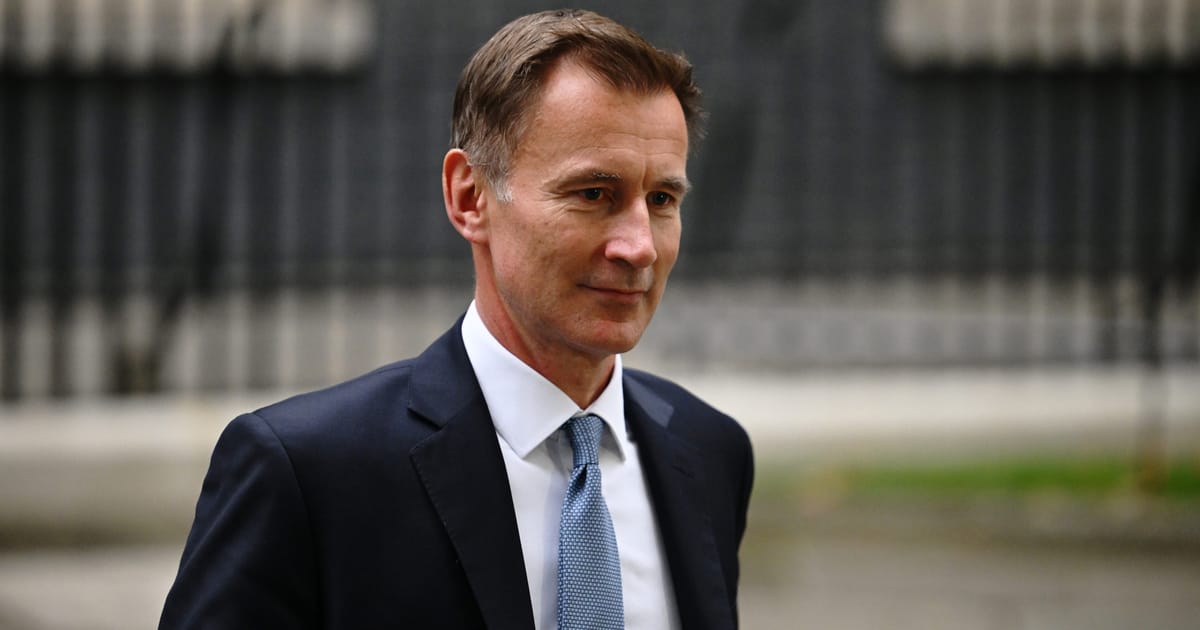 Most strikingly, planned cut to basic rate of income tax will be put on hold ‘indefinitely.’

“Growth requires confidence and stability,” Hunt said, in a clear admission Truss has been unable to provide either since her appointment as prime minister on September 6.

“The United Kingdom will always pay its way,” he added. “This government will therefore take whatever tough decisions are necessary.”

Those ‘tough decisions’ represent an economic U-turn on a scale rarely seen in the modern political era, with Hunt torching £32 billion of tax cuts only announced by the government last month. In the House of Commons later, Truss sat stony-faced as Hunt explained to MPs why he was course-correcting and tried to assure the public each of his decisions "will be shaped by core compassionate Conservative values."

The scale of Hunt's emergency economic surgery cannot be overstated.

He massively scaled back Truss’ energy price support scheme as he sought to reassure markets that Britain’s finances can be returned to a stable footing. Hunt said the energy price guarantee, the flagship policy of Truss’ debut mini-budget and designed to prevent huge increases in household energy bills, will only remain universal until April, when a new targeted plan will be put in place.

Truss’ planned cut to the basic rate of income tax will also be put on hold “indefinitely, until economic circumstances allow,” Hunt said.

The initial reaction from markets to Hunt’s statement was positive. Gilts — bonds issued by the British government which reflect the cost of national borrowing — extended their rally, while the pound rallied against the dollar in the immediate aftermath of Hunt’s words.

But while the financial markets appear calmer for now, Truss' own position remains highly perilous, with an increasing number of her own MPs demanding she be replaced immediately.

Shortly after Hunt’s statement Angela Richardson, the Tory MP for Guildford, told Times Radio it was not tenable for Truss to stay in her post any longer. Other Conservative MPs — Crispin Blunt, Andrew Bridgen and Jamie Wallis — publicly called for Truss to go over the weekend, while veteran Tory MP Charles Walker told Sky News Monday night that if Truss didn't decide to go "right now, it won't be her decision."

He warned: "That agency will be taken away from her."

In the Commons Monday afternoon, MPs erupted in laughter when they were initially told Truss had been “detained on urgent business” after she declined to show up to an urgent question put forward by the opposition Labour Party.

Penny Mordaunt, a former Truss leadership rival who now serves as leader of the Commons, took questions in Truss' place — and was forced to deny the charge from Labour MP Stella Creasy that the prime minister was "cowering under her desk and asking for it all to go away."

Mordaunt said: "The prime minister is not under a desk… I can assure the house."

Truss later showed up for a Commons statement by Hunt, during which she looked on as her new chancellor distanced her government from its own economic decisions. Hunt even appointed a new advisory council whose members, including Rupert Harrison — once the top adviser to former Tory Chancellor George Osborne — resembled the "Treasury orthodoxy" Truss once railed against.

Behind the scenes, dozens if not hundreds more MP want Truss gone. “It feels like when, not if,” a senior backbench MP said Monday.

It is only a matter of weeks since Truss was selected as leader by Conservative Party members who were won over by her bold — and highly risky — platform of unfunded tax cuts and deregulation, which quickly became known as Trussonomics.

Her plans to cut income tax, freeze alcohol duties, cut dividend tax rates, reverse payroll working reforms introduced in 2017 and 2021 and introduce a new VAT-free shopping scheme for non-U.K. visitors will all now be scrapped, however.

Truss had already announced last Friday, hours after sacking her initial pick as chancellor, Kwasi Kwarteng, that she would raise corporation tax in line with the previous U.K. administration’s plans, having pledged during the Tory leadership contest not to do so.

Indeed, the only tax cuts to survive from September’s mini-budget will be the reversal of a hike in national insurance, changes to stamp duty, and a permanent £1 million annual investment allowance for businesses.

Truss held a meeting with her Cabinet an hour before Hunt’s TV statement during which she insisted the government was still committed to a growth agenda, including introducing new low-tax investment zones, speeding up roads projects and increasing energy supplies.

But critics from all political sides said her premiership had already failed, and that her authority as leader was shot.

The Conservatives have “lost all credibility,” Labour’s Shadow Chancellor Rachel Reeves said. “The chancellor said that growth requires ‘confidence and stability’ — yet it’s clear that the Tories can’t provide this.”

Some speculated the swift abandonment of Trussonomics would have long-term repercussions for the U.K.’s political outlook.

“Libertarians will not be allowed anywhere near power for generations to come,” Matt Goodwin, a professor of politics at the University of Kent, who has researched radical-right politics and Euroskepticism, tweeted on Monday.

Hunt made clear in his statement there would be “more difficult decisions” to come on tax and spending, with some economists forecasting a further £20 billion to £30 billion of cuts and tax rises will be required when the chancellor brings forward his full fiscal plan on October 31.

"This is now very clearly a tax-raising parliament,” said Torsten Bell, chief executive of the center-left Resolution Foundation think tank, “with the tax take set to reach highs not sustained since 1950.” Trussonomics, he added, had been "junked."

Bell said those tax rises would at least reduce the scale of public spending cuts required to balance the books on October 31, but warned that "many of Jeremy Hunt’s tough choices still lie ahead.”

Hunt will meet other senior ministers this week to discuss a plan for spending cuts which will then be submitted to the government’s independent fiscal watchdog, the Office for Budget Responsibility, for audit ahead of the October 31 statement.

Bell warned the cuts to the energy price guarantee from next April would also hit millions of households hard.

“The price of shielding the public finances from wholesale gas markets next year is more pressure on households,” he said, “with the energy price cap now on course to hit £4,000 next April — almost double its effective level today."