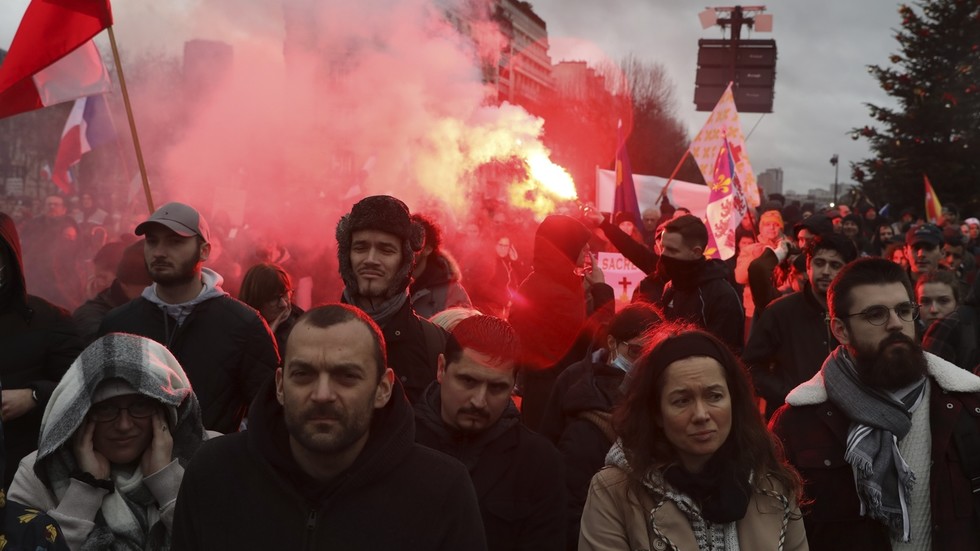 Protest grows bigger after president vows to ‘piss off’ the unvaxxed

At least 100,000 people took to the streets of France in protest against Covid-19 restrictions and mandates, after President Macron promised to make the lives of the unvaccinated increasingly hard until they accept the jab.

The huge crowds on Saturday were roughly four times larger than back on December 18, according to police estimates. The protesters opposed, among other things, a nearly implemented government plan to make proof of vaccination against Covid-19 mandatory to use public transport, eat at restaurants, and attend events.

France’s National Assembly passed a bill this week which, if approved by the Senate, would introduce so-called ‘vaccine passes’ to replace the existing ‘health passes’. Under the current rules, a negative PCR or antigen test gives access to a pass that is valid for 24 hours. A vaccine pass, however, would only be issued to those who have been fully vaccinated. People who were infected with Covid-19 would have to receive a booster shot three to four months after contracting the virus in order to get a vaccine pass, Health Minister Olivier Veran said. In the meantime, they could use their recovery certificates.

The crowd in Paris alone numbered at least 18,000, according to official estimates, with protesters heard chanting “We’ll piss you off!” in reference to Macron’s controversial comments.

Ten protesters were arrested and three police officers were reportedly injured in scuffles in the capital. At least another two dozen people were reportedly detained at numerous protests across other French cities.

During an interview with Le Parisien on Tuesday, Macron said, “I am not about pissing off the French people. But as for the non-vaccinated, I really want to piss them off.”

Macron revealed that continuing to “piss off” unvaccinated French people “to the end” is his “strategy,” and boasted that only a “small minority” was resisting government restrictions.

“How do we reduce that minority? We reduce it – sorry for the expression – by pissing them off even more,” the French president said, explaining that the plan includes “putting pressure on the unvaccinated by limiting, as much as possible, their access to activities in social life.”