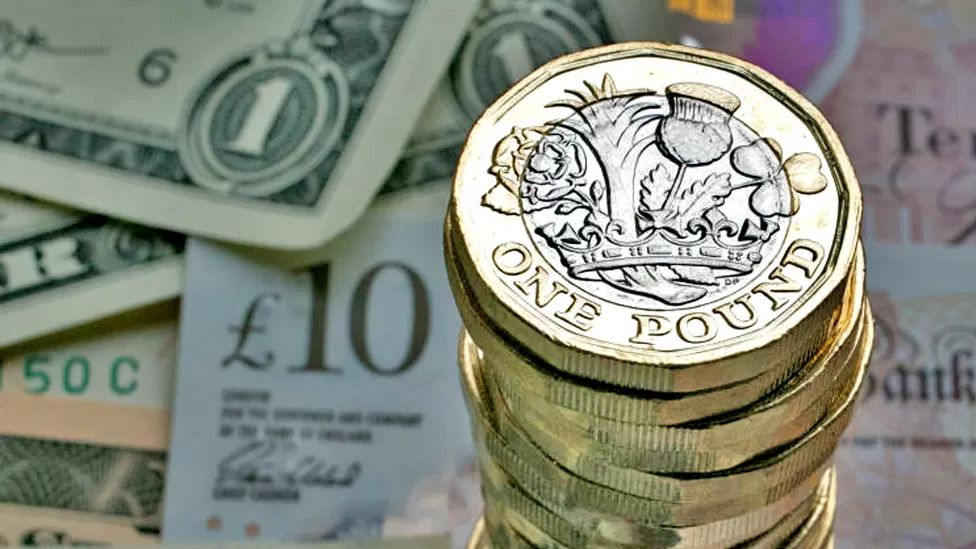 Pound in biggest monthly fall against the dollar since 2016

Worries over the prospects for the UK economy led the pound to slide by about 5% against the US dollar in August.

The last time the pound fell so much against the dollar was in October 2016, in the aftermath of the Brexit vote.

Sterling sank again on Thursday morning, dipping below $1.16 on the currency markets.

Analysts said the fall reflects the darkening outlook for the economy, with consumers and businesses facing rising prices and soaring energy bills.

The Bank of England has predicted the UK will fall into recession towards the end of this year.

The weak pound means Brits travelling overseas will find their spending money will not stretch as far.

"Our economic prospects are not looking particularly good compared to the rest of the world," said Laura Lambie, senior investment director at Investec.

Ms Lambie said that recession fears were weighing on markets, with the investment bank Goldman Sachs warning this week that the UK could remain in recession until 2024.

A recession is defined as the economy getting smaller for two consecutive three-month periods.

August was also the worst month for the pound against the euro since the middle of last year.

UK government bonds - or debt - had their worst month for decades. Investors, worried about the riskiness of lending to the government, demanded higher returns for doing so, making it more expensive for the country to borrow money. In August, the yields, or the effective interest rate you would get, on some of those bonds have jumped the most since 1994.

Colin Ellis from ratings agency Moody's told the BBC's Today programme the jump in yields needed to be put in context. "Energy bills are very very high, and set to go up again. which means inflation is going to be high and that the Bank of England is raising interest rates in response.

"Those expectations for higher interest rates are part of what's driving these moves in the bond market at the moment."

However, he said: "We still have a stable outlook on our UK government rating so we see the risk as broadly balanced. We're not very concerned but of course a lot will depend on the policies that the next government chooses to put into place."

Fears have grown over the prospects for the UK economy after figures showed it shrank between April and June, with businesses and households feeling the impact of rising prices.

Those concerns were fuelled on Thursday, with a new study suggesting the manufacturing sector shrank in August for the first time since May 2020.

Separately, a report by the Resolution Foundation think tank said typical household disposable incomes are on course to fall by 10%, or £3,000, over this year and next, which is called the "the deepest living standards squeeze in a century".

The cost-of-living crisis is set to be the biggest challenge facing the new Prime Minister.

Both Rishi Sunak and Liz Truss have come under pressure to outline how they would support households if they succeed in getting the keys to Number 10. 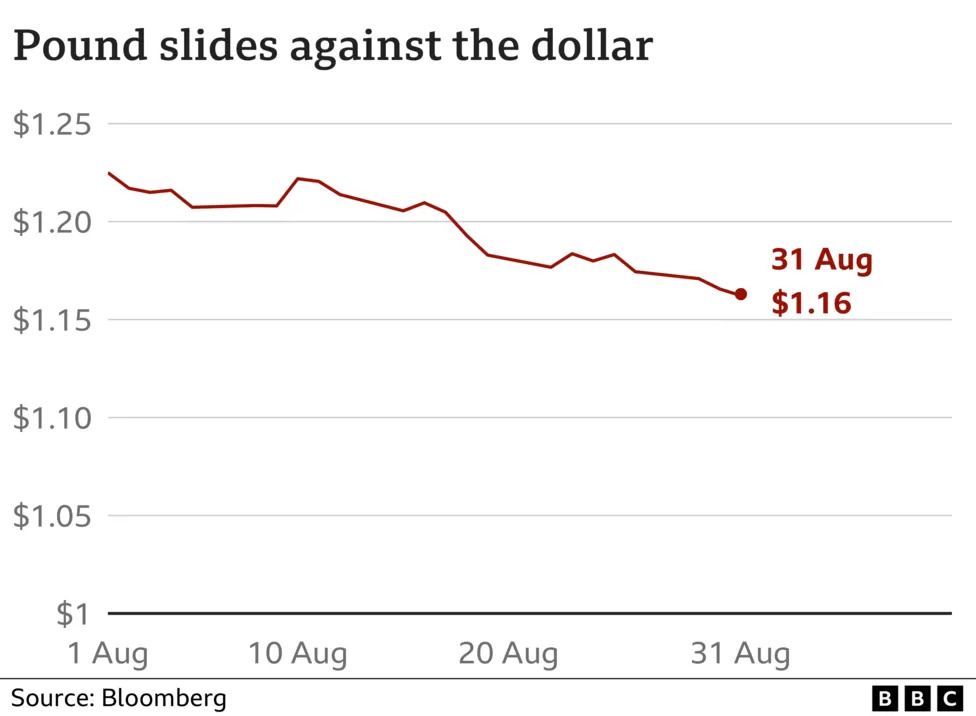 ''Grim forecasts about poverty spreading across the UK this winter highlight the deepening woes for the UK economy", said Susannah Streeter, senior investment and markets analyst at Hargreaves Lansdown.

The Bank of England raised interest rates to 1.75% in August, while forecasting that the UK economy would fall into recession this year.

But Ms Streeter predicts that the Bank of England might be forced to slow down rate rises in the coming months, given the cost of living crisis.

The pound's weakness is also a result of a strong dollar, analysts said.

The dollar is performing strongly due to US interest rate rises and because investors see it as a safer bet.

Last week, the head of the country's central bank, the Federal Reserve, indicated it would push ahead with further interest rate rises as it seeks to control inflation.

"The dollar has been exceptionally strong," Ms Lambie said.

"Also, the issues that we've had in Europe around energy do not have the same impact as the US, and I think economists are fairly agreed that the US will be the last to go into recession if they do go into recession at all, perhaps following the UK and Europe.

"So on both sides, from the sterling side and from the dollar side, that's really what has weakened sterling and strengthened the dollar."