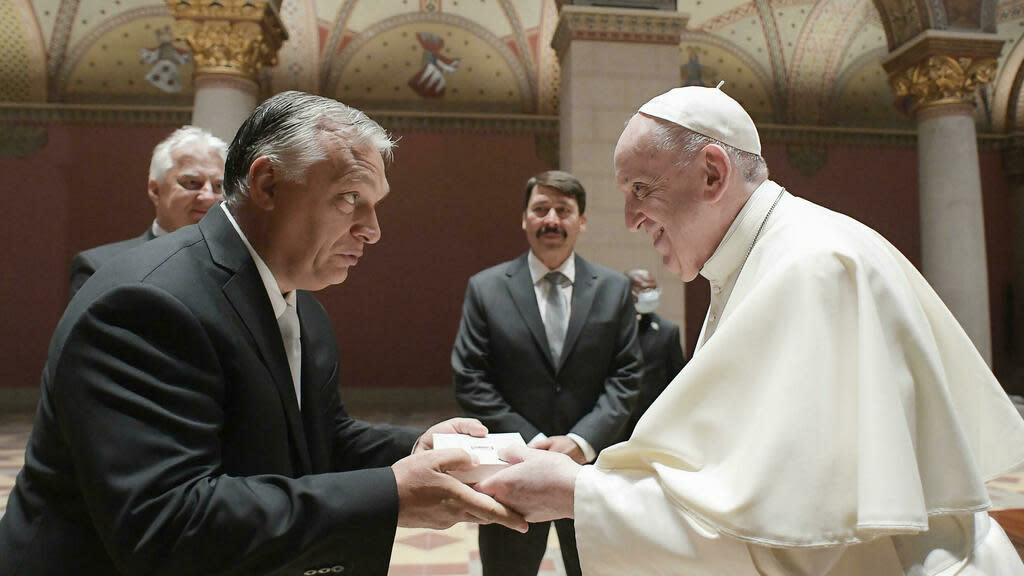 Pope Francis met with the anti-migration Hungarian Prime Minister Viktor Orban behind closed doors on Sunday at the start of a brief visit to Budapest where he will also celebrate a mass.

The Vatican television channel showed the pope entering the museum, but did not show images of the two men meeting, but Orban posted a photo of the two shaking hands on his Facebook page.

On one hand, Orban is a self-styled defender of "Christian Europe" from migration. On the other, Pope Francis urges help for the marginalised and those of all religions fleeing war and poverty.

But the pope's approach to meet those who don't share his worldview, eminently Christian according to the pontiff, has often been met with incomprehension among the faithful, particularly within the ranks of traditionalist Catholics.

Over the last few years, there has been no love lost between Orban supporters in Hungary and the leader of the Catholic world.

Pro-Orban media and political figures have launched barbs at the pontiff calling him "anti-Christian" for his pro-refugee sentiments, and the "Soros Pope", a reference to the Hungarian-born liberal US billionaire George Soros, a right-wing bete-noire.

'Not here for any politics'

From early Sunday, groups of pilgrims from around the country, some carrying signs with their hometowns written on them, were filing under tight security toward the vast Heroes' Square in Budapest, where the pontiff will say mass to close the 52nd International Eucharistic Congress.

"We are not here for any politics, but to see and hear the pope, the head of the Church. We can hardly wait to see him. It is wonderful that he is visiting Budapest," Eva Mandoki, 82, from Eger, some 110 kilometres (70 miles) east of the capital, told AFP.

Eyebrows have also been raised over the pontiff's whirlwind visit.

His seven-hour-long stay in 9.8-million-population Hungary will be followed immediately by an official visit to smaller neighbour Slovakia of more than two days.

Born Jorge Bergoglio to a family of Italian emigrants to Argentina, the pope regularly reminds "old Europe" of its past, built on waves of new arrivals.

And without ever naming political leaders he castigates "sovereigntists" who turn their backs on refugees with what he has called "speeches that resemble those of Hitler in 1934".

In April 2016, the pope said "We are all migrants!" on the Greek island of Lesbos, gateway to Europe, bringing on board his plane three Syrian Muslim families whose homes had been bombed.

In contrast, Orban's signature crusade against migration has included border fences and detention camps for asylum-seekers and provoked growing ire in Brussels.

Orban's supporters point instead to state-funded aid agency "Hungary Helps" which works to rebuild churches and schools in war-torn Syria, and sends doctors to Africa.

Orban's critics, however, accuse him of using Christianity as a shield to deflect criticism and a sword to attack opponents while targeting vulnerable minorities like migrants.

Days before the pope's arrival posters appeared on the streets of the Hungarian capital -- where the city council is controlled by the anti-Orban opposition -- reading "Budapest welcomes the Holy Father" and showing his quotes including pleas for solidarity and tolerance towards minorities.

During the pope's stay in Budapest he will also meet the country's bishops, and representatives of various Christian congregations, as well as leaders of the 100,000-strong Hungarian Jewish community, the largest in Central Europe.

Orban -- who is of Calvinist Protestant background -- and his wife -- who is a Catholic -- are to attend the mass later Sunday.

Around 75,000 people have registered to attend the event, with screens and loudspeakers placed the length of a main boulevard near the square to allow others to follow the ceremony.

The trip to Budapest was at the invitation of the congress, and follows the path of John Paul II who also attended the event in 1985 in Nairobi, Kenya.

It is the first papal trip to Hungary since Pope John Paul II in 1996.

The 84-year-old pontiff's 34th foreign trip comes two months after a colon operation that required a general anaesthetic and a ten-day convalescence in hospital.