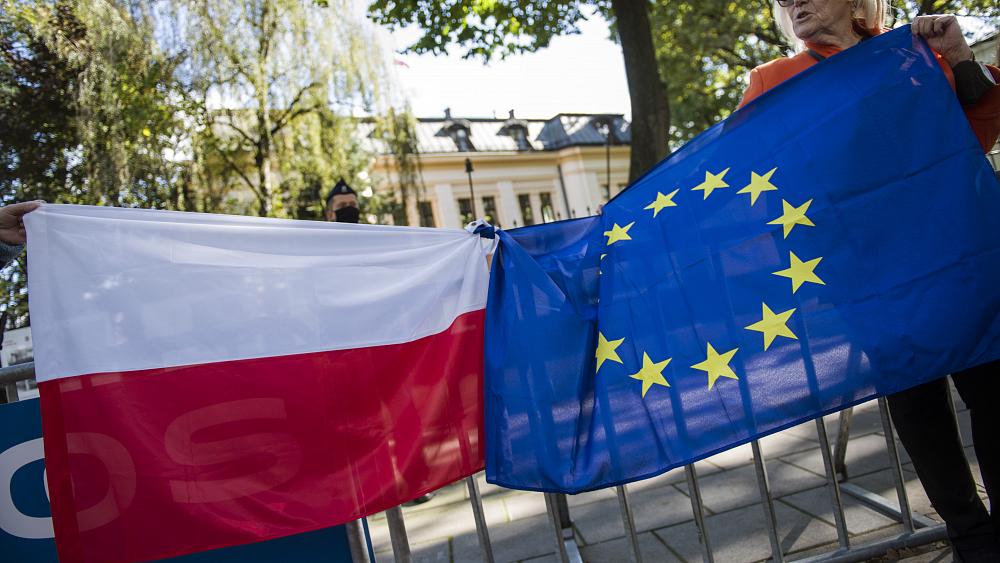 The Constitutional Tribunal in Warsaw ruled that Polish law has supremacy when it clashes with EU treaties and laws, in a major challenge to the bloc's founding principles.

In a decision that has caused anger in Brussels and is likely to further damage Poland's troubled relationship with the 27-member bloc, the Constitutional Tribunal in Warsaw judged that some provisions of the EU treaties and some EU court rulings go against Poland’s highest law.

In a majority decision, the judges said the country's EU membership did not give EU courts supreme legal authority and did not mean that Poland had shifted its sovereignty to the EU. They said no state authority in Poland would consent to an outside limitation of its powers.

Reacting to the ruling on Friday morning, European Commission President Ursula von der Leyen said she was "deeply concerned" and has instructed her executive to analyse it "thoroughly and swiftly" to decide what steps to take.

"Our utmost priority is to ensure that the rights of Polish citizens are protected and that Polish citizens enjoy the benefits granted by membership of the European Union, just like all citizens of our Union," von der Leyen said in a short statement.

"Moreover, EU citizens as well as companies doing business in Poland need the legal certainty that EU rules, including rulings of the European Court of Justice, are fully applied in Poland," she added, stressing the supremacy of EU law over national law, "including constitutional provisions".

Supremacy of EU law is one of the cornerstone principles of the European Union. Established back in 1964 as a result of the precedent-setting Costa v ENEL case, the principle states that, in all cases where the EU has competence, the bloc's laws have priority over national legislation.

The main parties in the European Parliament took to Twitter to condemn the Polish verdict and urged the Commission to freeze payments for the country, which is the largest recipient of EU funds.

Brussels has been at loggerheads over the right-wing Polish government's attempts to exert more influence over the judiciary. It has called on the European Court of Justice to impose fines on Warsaw in a dispute over the rule of law.

What did the Polish court's ruling say?

The Polish tribunal took aim at two specific articles from the EU treaties: article 1, which establishes the existence of the European Union and the conferral of competences from member states, and article 19, which determines the powers of the EU’s Court of Justice (ECJ), whose mission is to ensure the observance of EU law across the bloc.

Two of the 14 judges dissented from the ruling, which followed months of court proceedings. Poland's government, president and parliament argued that Poland’s Constitution comes before EU law and that rulings by the ECJ sometimes conflict with Poland’s legal order.

Poland’s government insists that the justice system and the judiciary are the sole purview of EU member nations and not the EU, and has ignored a number of the EU court’s rulings.

Opening the case in July, Polish Prime Minister Mateusz Morawiecki asked for the review after the EU court ruled that the bloc's law takes precedence over Poland’s law.

The Constitutional Tribunal itself is seen by the EU as illegitimate due to the political influence of Poland’s governing party on the appointment of some of its judges. Many are government loyalists — including the court’s president, Judge Julia Przylebska, who headed the panel in the current case.

It’s unclear what kind of practical ramifications the Polish ruling will have in practice. The ruling will take effect only after being published in Poland's official journal, a move left to the discretion of the government itself.

The EU has never seen a member state’s judicial system defy so openly the foundations of the bloc, leaving Brussels with few options to react and correct the situation. Opening a new infringement procedure could prove futile since the last word of these punitive measures is decided by the European Court of Justice, whose competence is not fully recognised by the Polish justice system.

Reaction: 'A black scenario in Poland is coming true'

The reading of the Polish verdict coincided with a meeting of interior and justice ministers. Asked about the ruling, EU Justice Commissioner Didier Reynders said he needed more time to examine the court's decision but stressed the primacy of EU law over national law.

The Commissioner also underlined two additional principles: all decisions by the EU's Court of Justice are binding in all national courts and only the Luxembourg court has jurisdiction to determine if an act from another EU institution breaches EU law. Reynders added the executive intends to act as "guardian of the treaties" and use "all our tools at our disposal".

"Today's verdict in Poland cannot remain without consequences. The primacy of EU law must be undisputed. Violating it means challenging one of the founding principles of our Union," said David Sassoli, the President of the European Parliament.

"By declaring that the EU Treaties are not compatible with Polish law, the illegitimate Constitutional Tribunal in Poland has put the country on the path to Polexit," said a spokesperson from the centre-right European People's Party (EPP), the biggest in the hemicycle.

"EU Member States must not stand by idly when the rule of law continues to be dismantled by the Polish Government. Neither can the European Commission. Our money can’t finance the governments which mock and negate our jointly-agreed rules."

"A black scenario in Poland is coming true! PiS-run Tribunal has disregarded the primacy of EU law, violating EU foundations. Polish judges adjudicating on the basis of EU law can face prosecution," said the left-wing S&D Group, calling for the opening of new infringement procedure.

"The PiS Government has created a crisis, but it is Polish citizens' rights that are at risk. Polish citizens are EU citizens and deserve the full protections and rights offered by EU law," wrote Malik Azmani, first vice-president of the liberal Renew Europe group.

"A Polexit from the EU legal order seems to become unavoidable. It effectively makes cooperation impossible," added his colleague Sophie in 't Veld.

"Today's ruling will be most painful for Polish citizens. They will have to bear the cost of frozen EU funds," tweeted Daniel Freund, a German member of the Greens. "This stunt was started by PiS. It is their mess."

Martin Schirdewan, co-chair of The Left group, lamented the Polish decision and predicted other autocratic governments will demand similar verdicts from their constitutional courts.

Amnesty International said it was "another dark day for justice in Poland".

The European Conservatives & Reformists (ECR) group, to which PiS belongs, came out in defence of the Polish constitutional court.

"Those calling for Polexit should be reminded that our Union was created by member states to serve them – not the other way around," the group wrote in response.

"The EU has no legal right to interfere in how judges are appointed in a democratic member state."

The EU is, at its core, an entity based on principles of law. Member states agree to confer competences to the union which, in turn, drafts and passes laws that are equally applicable across the bloc. These laws, together with multiple programmes, projects and economic plans, are meant to advance the common interests of all member states.

Warsaw vs Brussels: The wider row

The latest escalation comes amid a larger dispute over deep changes the governing Law and Justice party has initiated to the Polish court system – changes the EU views as an erosion of democratic checks and balances.

The main point of contention is a controversial chamber of judges that Poland established with the power to discipline judges and prosecutors for their rulings.

Brussels sees the disciplinary chamber as a threat to the country's judicial independence that makes judges subject to political control. The Polish government insists it is an essential tool to eliminate the remains of the communist regime.

The EU's Court of Justice issued in July an injunction to suspend both the chamber and the effects of the decisions it had already taken on the lifting of judicial immunity.

However, the Polish constitutional tribunal rejected the ruling, arguing it was inconsistent with the Polish condition and therefore non-binding.

In response to this, the European Commission sent an ultimatum and gave Poland until 16 August to abide by the Luxembourg ruling and suspend the disciplinary chamber. Otherwise, the executive would request daily penalties – the final and most forceful step of an infringement procedure.

Even though the Polish government sent a reply on 16 August and promised to dismantle the chamber, the Commission was not satisfied and believes the country "has not taken all the measures necessary to fully comply" with the order. The disciplinary chamber continues functioning today, the executive noted.

Consequently, the Commission asked the EU's Court of Justice to slap Poland with daily financial penalties until the interim measures issued in July are applied. The Luxembourg court is studying the Commission’s request and no fines have been imposed so far.

At the same time, the European Commission is assessing Poland's €57-billion recovery and resilience plan but doubts remain over its content, including judicial matters. Brussels has delayed several times the publication of its assessment and says it's engaged in dialogue with the Polish authorities to negotiate changes that can guarantee the executive's green-light. The Commission said on Friday afternoon the review process will continue, in spite of the latest development.

In parallel, the Commission is preparing to activate a never-used mechanism that makes receiving EU funds contingent upon respecting the rule of law. The conditionality scheme, which can suspend EU payments, has to be approved by the EU Council with a qualified majority vote. Reforms that endanger judicial independence fall under the scope of the regulation.