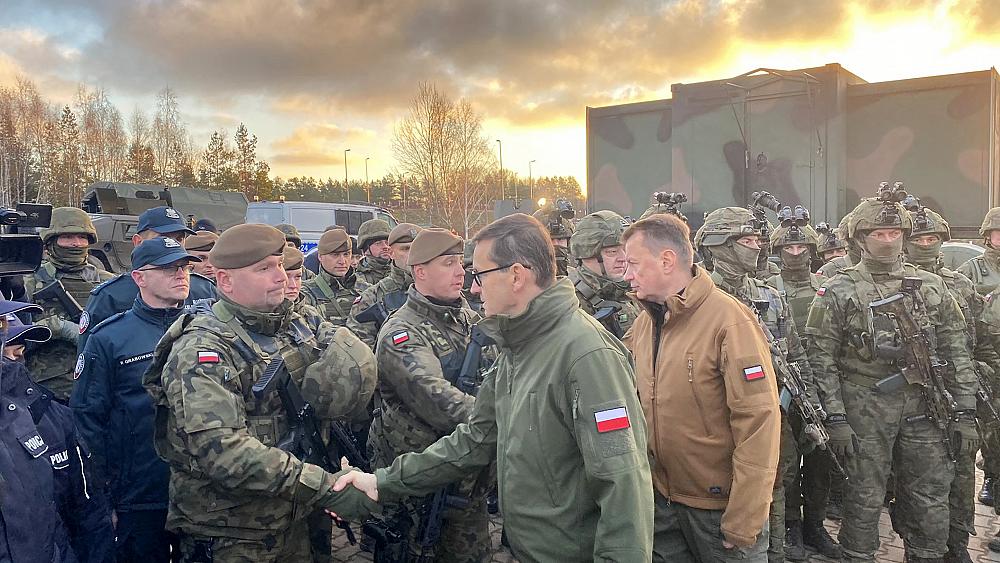 Poland's prime minister accused the Russian president of orchestrating the influx of migrants attempting to cross from Belarus, in a parliamentary debate on Tuesday.

Poland's Prime Minister Mateusz Morawiecki has accused the Russian President Vladimir Putin of orchestrating the migration crisis on the country's border with Belarus.

"(Belarusian leader) Lukashenko is the executor of the latest assault, but this assault has a sponsor who is to be found in Moscow, and this sponsor is President Putin," Morawiecki said during an emergency debate in the Polish parliament.

The prime minister described the situation at the border as part of an effort by Russia to disrupt a region that it controlled during the Soviet era.

"The security of our eastern border is being brutally violated. This is the first such situation in 30 years when we can say that the integrity of our borders is being tested,” he said.

The Russian and Belarusian leaders spoke by phone about the tensions at the border between Poland and Belarus, Moscow and Minsk said on Tuesday.

Poland reinforced its border with Belarus with more riot police, a day after groups tried to charge through a barbed wire fence. Thousands of migrants and refugees remain massed in freezing cold weather Poland's eastern frontier, on the doorstep of the European Union.

"In view of the numerous injuries on the migrants' bodies, Polish law enforcement officers treated them brutally and chased them over the barbed wire fence at the border with Belarus," the Belarusian Border Guard Service said.

The European Union said on Tuesday that it is monitoring 20 countries, including Russia, for their possible role in the transport of migrants towards Belarus, which Brussels accuses of orchestrating the influx of migrants on its external borders.

Measures have been taken against 13 nations from where flights are said to have carried migrants to Minsk.

A spokesman for the EU's chief diplomat Josep Borrell said Moscow was on its "radar", and Brussels was evaluating information and data on flights from Russia and its possible implication.

Acknowledging the phone call between Lukashenko and Putin, a statement from the Kremlin simply referred to "an exchange of views on the refugee situation".

Lukashenko's office elaborated further, saying the circumstances at the border had featured prominently in the conversation between the two leaders, "as well as the harsh actions of the Polish party towards civilians".

Minsk has tried to shift the blame onto Poland, describing as "particularly worrying" the deployment of Polish security forces at the border. In an interview on Tuesday, Lukashenko blamed Poland for flouting its humanitarian obligations, accusing Poland of conducting a "war" against the migrants.

Russia is Belarus' main ally and Lukashenko has relied on Putin for political and financial support in the face of increased pressure from the EU and the West over last year's disputed election, human rights and more recently the migration crisis.

The sudden surge in numbers and attempted crossings into Poland on Monday brought international condemnation of Belarus. The EU accused Lukashenko of a "cynical" exploitation of migrants, orchestrating the influx in revenge for European sanctions imposed on his autocratic regime after the brutal repression of opposition in the country.

The EU believes Belarus has been flying people from Middle Eastern countries and dumping them at EU borders, or facilitating their journeys -- exploiting them in a "cynical" manner to destabilise the bloc in retaliation for Western sanctions.

The past few days represent a major escalation in tensions between Minsk and its neighbours. For months migrants have been arriving at the country's border not just with Poland -- but also with Lithuania and to a lesser extent, Latvia -- the three EU states on the bloc's eastern border with Belarus.

European Council President Charles Michel on Tuesday demanded a "rapid" solution on EU border financing amid what he called Belarus' "weaponising" of migrants at its eastern frontier.

Michel has called on the other member states to support Poland, Latvia and Lithuania.

"Polish and Baltic borders are EU borders. One for all and all for one," the Belgian said on Tuesday during a speech marking the anniversary of the fall of the Berlin Wall.

Twelve EU countries - including Poland, Lithuania and Latvia, and also Denmark, Austria and Hungary - demanded at the beginning of October that physical barriers at the borders be at least partially financed from EU funds.