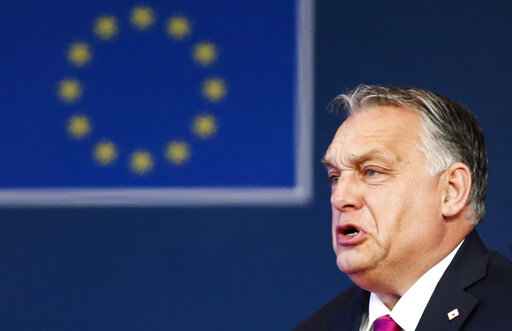 Hungary will not change its immigration policies despite a recent ruling from the European Union's top court that found them in contradiction with the bloc's laws, Prime Minister Viktor Orban said Tuesday.
Orban's announcement came as Hungary's anti-immigration government is locked in a dispute with the EU over the bloc's jurisdiction over the affairs of its 27 members, especially concerning his government's policies on immigration and LGBT issues.

A ruling last year by the European Court of Justice found that Hungary had failed to respect EU law by conducting pushbacks of people entering the country without authorization, denying them the right to apply for asylum and detaining them in "transit zones" along Hungary's southern border with Serbia.

But during a rare news conference in Budapest on Tuesday, the right-wing populist Orban insisted that Hungary would continue its migration policies, and that "it doesn't matter what the European court ruled. Hungary must continue to defend its borders."

"We decided that we will not do anything to change the way the border is protected," Orban said. " We won't change it and we aren't going to let anyone in."

The refusal to comply with the European court's decision could result in heavy fines being levied on Hungary by the EU. In September, the bloc's highest court began issuing daily fines of 1 million euros ($1.2 million) to Poland, a key ally of Hungary's, after it failed to comply with a court decision on suspending changes to its judicial system.

Such potential fines from the EU would be the next in a series of financial penalties that have already seen Hungary lose out on billions in funds from the bloc.

The EU's executive, the European Commission, has withheld around $8 billion in COVID-19 recovery funds earmarked for Hungary because of what it sees as inadequate anti-corruption measures in the country's spending plan.

On Tuesday, Orban - who next spring will face what is expected to be the tightest election since he took power in 2010 - called the withholding of recovery funds "political blackmail," and said the EU had "no right" to hold back money owed to Hungary.

"The entire procedure is the most brutal sabotage of the unity and future of the European Union," he said. "This is what is breaking up the Union. I've never seen more irresponsible politics than in this issue. Who after this will trust the Commission?"

Hungary's government this month decided to halt more than $1 billion in investments to stem budget deficits emerging from record-high inflation and major state expenditures in the form of tax cuts and social benefits to retirees and families with children.
#Viktor Orban  #COVID-19  #Covid
Add Comment