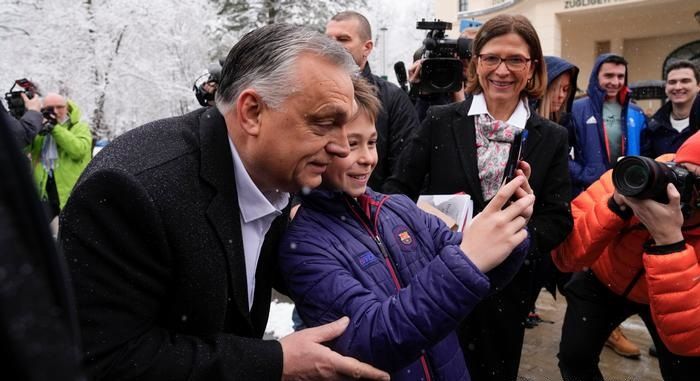 Hungarian Prime Minister Viktor Orban has won a fourth term in a general election overshadowed by the war in Ukraine. Dora Diseri, the head of DW's Hungarian department analyzes why he remains so popular.

Once again, the question being asked is: How can Viktor Orban still have so much support in Hungary? Until now, the answer always pointed to a divided and floundering opposition. But this time, the six main opposition parties joined forces to contest the parliamentary elections as a united front. Primaries were held with candidates competing to get on the list. Instead of pointless controversies and smear campaigns, there was debate about substantive issues.

There had been some hope that this united opposition might succeed in at least denting Orban's success but the ruling Fidesz party was better able to mobilize undecided voters than expected. It even managed to pull off victories in constituencies where opposition candidates had been tipped to win. So, how did that happen? Orban has always managed to score points with his combative rhetoric and in the past few years, he has directed that against Brussels, George Soros, migration, NGOs, even against the high price of utilities. Now, he is fighting against war.

The Russian invasion of Ukraine temporarily upset the ruling party's election campaign. But, it quickly managed to recover. Fidesz made it clear that it was on the side of peace. It insisted that as long as it was in power, no lethal arms would be allowed to transit Hungary, no peacekeeping troops would be sent to Ukraine, and no sanctions would be imposed that could put energy supplies at risk.

Zelenskyy seen as the enemy in Hungary

Hungarian Foreign Minister Peter Szijjarto even accused Ukraine of deliberately interfering in the Hungarian elections. The Hungarian government is the only one in the EU and NATO that does not consider Ukrainian Volodymyr Zelenskyy a hero, but an enemy that has allied itself with the Hungarian opposition.

It is no coincidence that Orban did not join leaders from Poland, the Czech Republic and Slovenia in mid-March when they visited Kyiv. He chose instead to visit Serbian President Aleksandar Vucic, who, like Orban, has fostered close ties with Moscow, and also just secured reelection.

Orban has taken some big risks to win reelection. By opting for a Russia-friendly course, he endangered Hungary's longstanding friendship with Poland as well as risked cooperation with the other two Visegrad powers, the Czech Republic and Slovakia. The government also did everything it could to try to mask high inflation in the country: Parents were given their income tax back, pensioners received an extra month of pension, gas and basic food prices were capped, and an increase in electricity prices was delayed with the help of massive state subsidies.

This can only be temporary. The state cannot afford to keep these measures in place for long. Orban will have to rein in spending if he does not want the country to go bankrupt. He will also have to break out of the diplomatic isolation, in which he has maneuvered himself. Hungary has to repair relations with the Visegrad powers as well as its own position in the EU.

Opposition coalition will be short-lived

Meanwhile, the defeat of the opposition shows that the coalition that was cobbled together will not last long. It is telling that the candidate it had put forward, Peter Marki-Zay, stood with his family when making his concession speech rather than with the other parties in the coalition. Instead of backing Marki-Zay, some opposition politicians began voicing claims about the reasons for the defeat. It is clear that the opposition did not put up a good enough fight. Since Marki-Zay once supported Fidesz himself, he was seen perhaps to only represent a better "variant" of the ruling party but not necessarily a real alternative.

The far-right has benefited from this disarray. Few observers had seriously expected the Mi Hazank (Our Homeland) movement to get past the 5% hurdle. Yet, it did and now has seven seats in parliament. Formed in 2018 as an offshoot of the radical right Jobbik party, it functions as a "satellite party" for Fidesz and seems to be particularly popular with COVID skeptics, anti-vaxxers and homophobes.

Once again, the results confirm how profoundly polarized Hungarian society is. There is a widening gap, also an ideological one, between the rural regions and the cities. These parallel worlds have existed in Hungary for years. Fidesz is popular in rural areas, the opposition in urban centers.

Many supporters of Orban see him as a harbinger of peace, fighting for the rights of the country and a savior of the nation. His critics see him as a corrupt fraudster, who is too close to Russian President Vladimir Putin and wants to lead Hungary out of the EU.

This has to come to an end. Orban has sparked such deep divisions in the country that he will at one point trip over them himself. He has to understand that because, otherwise, it will be too late.