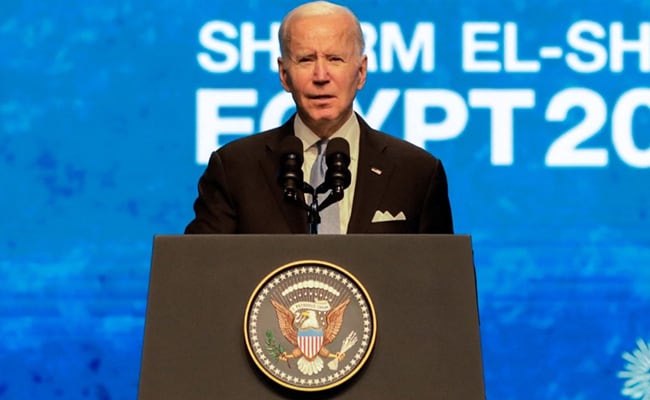 On Climate Crisis, Joe Biden Says "Very Life Of The Planet" Is At Stake

"The climate crisis is about human security, economic security, environmental security, national security, and the very life of the planet," Biden said, before outlining steps the United States, the world's second-biggest greenhouse gas emitter, was taking.

His speech was intended to remind government representatives gathered in Sharm el-Sheikh to keep alive a goal of keeping the global average temperature rise within 1.5 degrees Celsius to avert the worst impacts of planetary warming. It came even as a slew of crises - from a land war in Europe to rampant inflation - distract international focus.

"Against this backdrop, it's more urgent than ever that we double down on our climate commitments. Russia's war only enhances the urgency of the need to transition the world off its dependence on fossil fuels," he said.

Prior to his arrival, President Biden's administration sought to set the stage by unveiling a domestic plan to crack down hard on the US oil and gas industry's emissions of methane, one of the most powerful greenhouse gases, in a move that defied months of lobbying by drillers.

Washington and the EU were also planning to issue a joint declaration on Friday pledging more action on oil industry methane, building on an international deal launched last year and since signed by 119 nations to cut economy-wide emissions 30% this decade.


The announcements come under a cloud of skepticism that world governments are doing enough to address warming.

A United Nations report released last week showed global emissions on track to rise 10.6% by 2030 compared with 2010 levels, even as devastating storms, droughts, wildfires and floods are already inflict billions of dollars in damage worldwide.

Scientists say emissions must instead drop 43% by that time to limit global warming to 1.5 degrees Celsius (2.7 degrees Fahrenheit) above pre-industrial temperatures as targeted by the Paris Agreement of 2015 - the threshold above which climate change risks start spinning out of control.

Many countries, including the United States and members of the European Union, are also calling for increased supply of fossil fuels in the near-term to help bring down consumer energy prices that have spiked since Russia's war on Ukraine.

Meanwhile, UN organizers have been criticized by human rights activists for holding the COP27 in Egypt, whose government has been accused of abuses since a 2013 military overthrow of its first democratically elected president.

Upon arrival, Egypt's President Abdel Fattah al-Sisi told U.S. President Joe Biden that Egypt has launched a national strategy for human rights and is keen to develop in that regard.
#Joe Biden
Add Comment