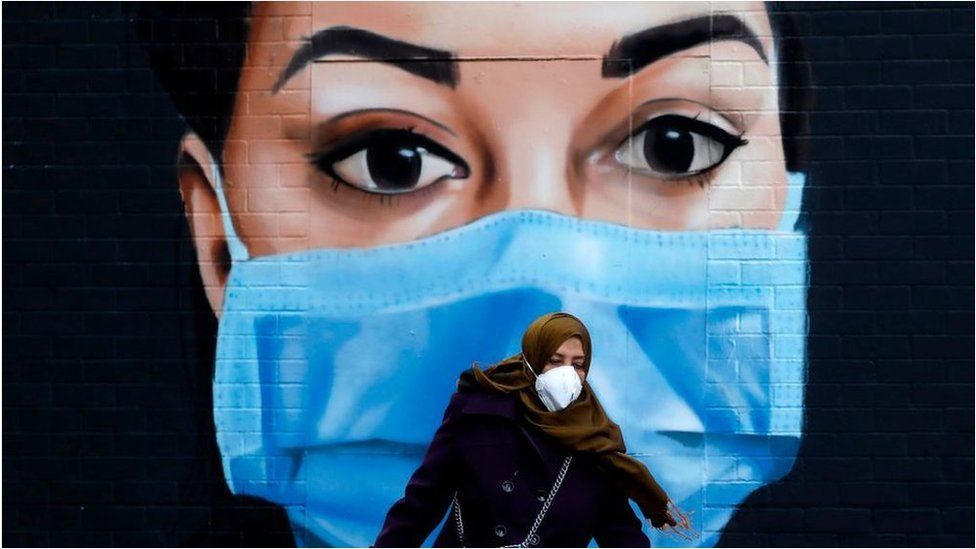 Omicron: Good news, bad news and what it all means

The world is being hit by a tsunami of Omicron. Scientists, politicians and indeed all of us are grappling with what it means for our lives.

Restrictions are tightening in parts of the UK and other European countries in order to tackle the new variant.

There's a constant stream of new information - some worrying, some positive. So where do we stand?

This is not last winter

It is easy to forget, but we are in a much brighter place than this time last year when many of us could not meet family on Christmas Day.

The "Christmas bubble" rules meant in parts of the country you could spend the day only with those you lived with. But there were limits on the size of gatherings across the UK.

The rise of the Alpha variant in late 2020 led to lockdowns in November and a long one in the New Year as the vaccination programme was only just getting going.

The rules currently in place or coming into force on Boxing Day in Scotland, Wales and Northern Ireland are much gentler by comparison.

If you catch Omicron then you are less likely to become seriously ill than with previous variants.

Studies from around the world are painting a consistent picture that Omicron is milder than the Delta variant, with a 30% to 70% lower chance of people infected ending up in hospital.

Omicron can cause cold-level symptoms such as a sore throat, runny nose and a headache, but that does not mean it will be mild for everyone and some will still be seriously ill.

Changes to the virus seem to have made it less dangerous, but most of the reduced severity is down to immunity as a result of vaccination and previous bouts of Covid.

But Omicron is spreading very fast

The worry is severity is only one half of the equation if you care about whether hospitals can cope.

If Omicron is half as likely to land you in hospital, but twice as many people are infected then the two cancel out and you're back to square one.

And Omicron's real talent is infecting people. It spreads faster than other variants and can bypass some of the immune protection from vaccines and prior infections.

The UK has record levels of Covid with confirmed cases on Thursday reaching nearly 120,000 - and this is an underestimate of what is really going on as not everyone gets a test and people who catch it more than once aren't included in the figures. 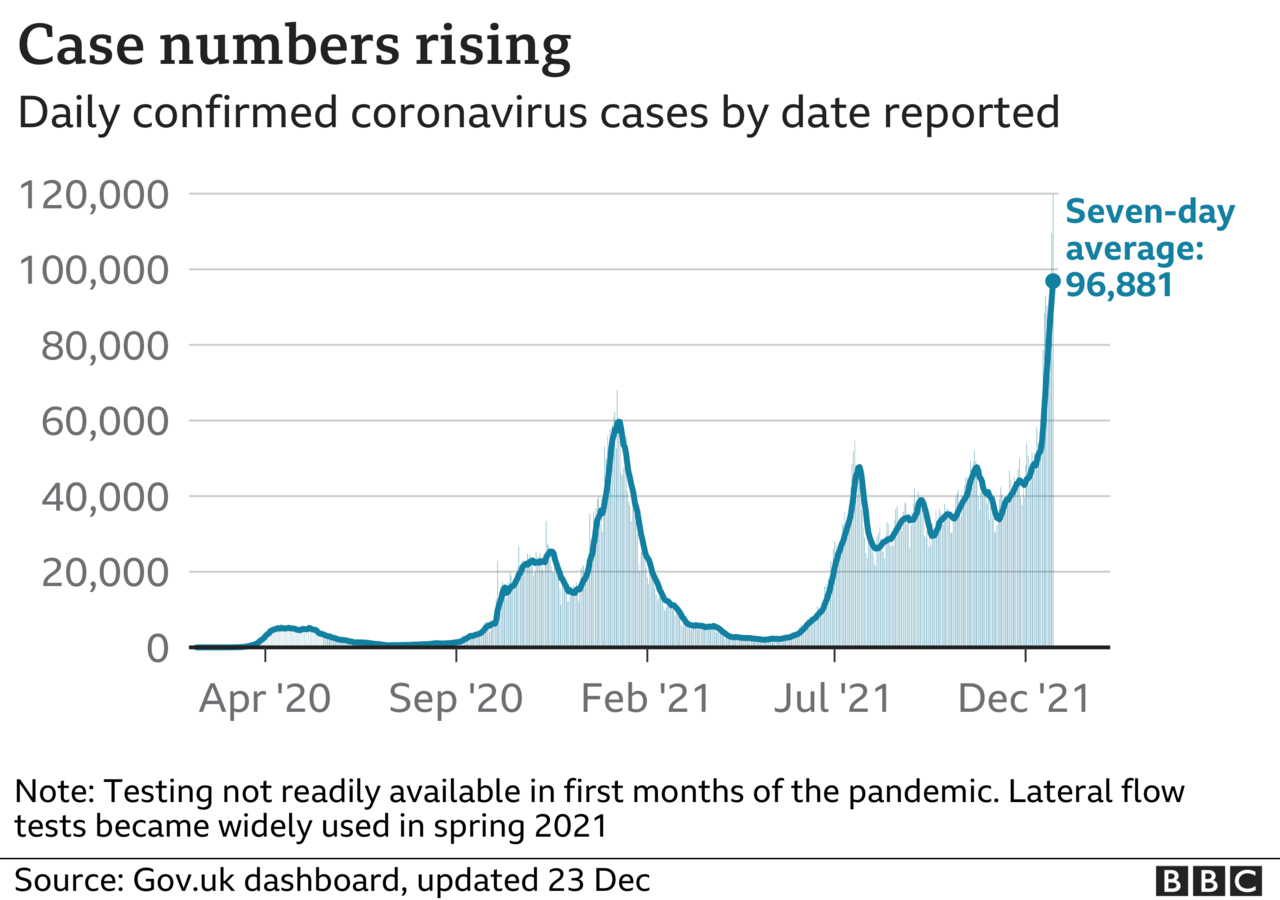 We're not sure what will happen when Omicron hits the elderly

Old age has always been the biggest risk-factor for becoming seriously ill with Covid.

In the UK, most of the Omicron cases and people ending up in hospital are under the age of 40 so we do not know for sure what will happen when it reaches old and vulnerable populations.

The ability of Omicron to partially evade immunity means there is the potential for more older people to be infected than during the Delta wave.

Huge numbers have been boosted, but protection wanes

Two doses of a vaccine offer little protection against catching Omicron, which led to a massive expansion of the booster campaign.

Now more than 31 million people in the UK have enhanced their immune defences. 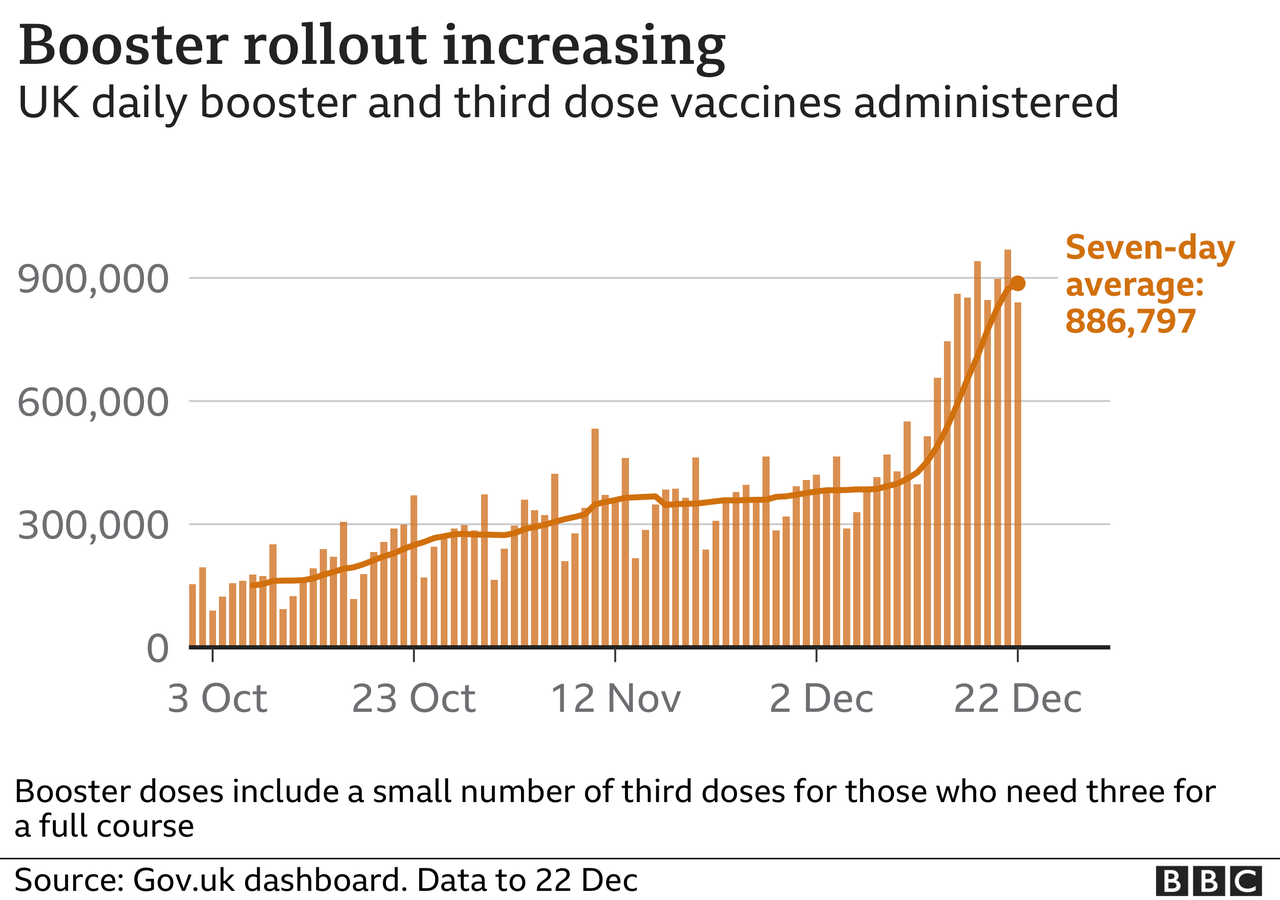 But we do have anti-viral drugs now

New medicines should keep even more patients out of hospital.

They are being given to people who are at high risk from Covid, including cancer patients and people who have had an organ transplant.

Both suppress the virus which buys time for the immune system to react. 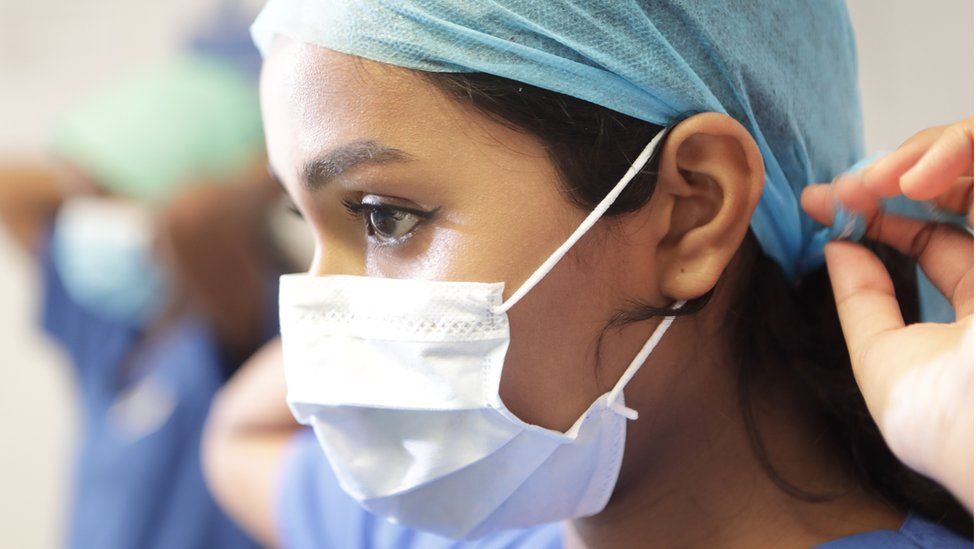 The NHS and staff are already feeling the strain

A surge in Omicron could put more people in hospital at the same time as taking away the people needed to care for them.

The sheer volume of people catching Omicron is also affecting doctors, nurses and the rest of the NHS workforce as they have to isolate too.

Meanwhile, NHS Providers, which represents hospital and ambulance services in England, says the health service is facing its busiest Christmas period ever. And that overall, 94.5% of adult beds were occupied compared with 89% last year.

The next few weeks are key

The question is whether everything in our favour - milder, antivirals, boosters - is enough to deal with a variant that spreads faster than anything we've seen before.

Or will it take more restrictions to manage the Omicron wave?

The speed this is happening means we will know very quickly how this is going to shake down.

mike 32 days ago
It's christmas again. So - send the grandpa to the hospital - like every year.
(Omicron is completely meaningless.)
View all comments (1)Add comment