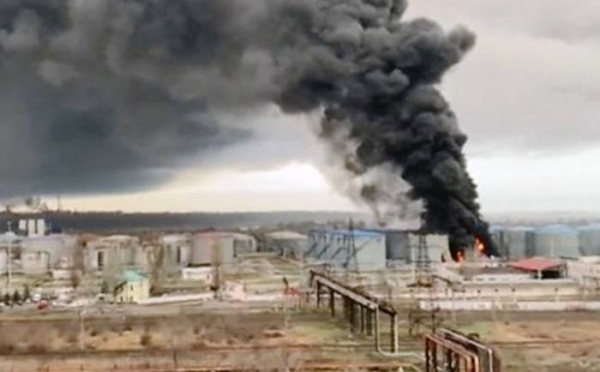 Missiles slam into strategic port of Odesa in Ukraine

As the war on Ukraine rages, Russia, who launched the assault on Feb. 24, claimed that it had attacked Odesa, on major port hub, and targeted infrastructure.
Missile slammed into the Ukrainian city of Odesa Sunday morning. The Russian Defense Ministry said that its forces destroyed an oil refinery and three fuel storages with high-precision sea and air missiles in the Odesa region, Interfax news agency reports.

It said that the facilities were being used by Ukraine to supply its troops near the city of Mykolaiv. Ukrainian officials said that there are no known casualties from the early morning strike.

All eyes have turned to the southern port city, where explosions were heard on Sunday morning.

Odesa has been preparing for an imminent attack for weeks now, with Russian warships circling off the Black Sea coast.

Residents left, and cafes and trams emptied as streets were covered in tank traps and famous monuments surrounded by protective sandbags.

But the city had since begun to cautiously reopen, despite the air raid sirens, neighborhood patrols and fears of a Russian attack, the BBC’s Andrew Harding reported last week.

The confidence was believed to partly be the result of Russia’s stalled advance along the Black Sea coast.

But how prepared is Odesa, given Ukraine’s President Zelenskyy’s warning that Russian forces would now focus on capturing the east and south?

Some analysts believe it will be hard for Russia to take Odesa by sea without first establishing a base on land.

But meanwhile, the city’s vast catacombs — some 2,500km of underground tunnels — are being repurpsoed as air raid shelters.

In a post on his Telegram channel, Ukrainian military official Vladislav Nazarov said that so far there are no known casualties following the attack.

Nazarov added that critical infrastructure facilities were damaged but didn’t give any more details on the target.

On Saturday, Ukraine’s chief negotiator said negotiations had advanced far enough to make a meeting between presidents Zelenskyy and Vladimir Putin a possibility.

Russia’s chief negotiator Vladimir Medinsky is now suggesting that this is not the case. “The draft agreement is not ready for submission to a meeting at the top,” Medinsky posted on his Telegram channel.

In the Ukrainian army’s daily operational update, its military officials gave details of Russian attacks in the eastern Donbas region.

The UK’s Ministry of Defense too published its morning update on the conflict.

According to its military intelligence, the UK has observed a concentration of Russian air activity on Ukraine’s south-east — which it suggests is part of a strategic refocusing by Moscow on the region.

While Russian forces may still be capable of an amphibious landing on Ukrainian territory, the UK believes this would be an increasingly risky operation given the time Ukrainian forces have now had to prepare.

Russia has shifted most of the focus of its war to eastern Ukraine — specifically the two big regions of Luhansk and Donetsk, which run from outside Mariupol in the south all the way to the northern border.

This push into the area known as Donbas could signal a more prolonged conflict, said the US.

“The key is that it has been identified by the Kremlin as a Russian-speaking part of Ukraine that is more Russia than Ukraine,” said Sam Cranny-Evans of the Royal United Services Institute.

These areas may be broadly Russian-speaking, but they are no longer pro-Russian.

“Mariupol was one of the most pro-Russian cities in Ukraine and to level it is beyond my comprehension,” says defense specialist Konrad Muzyka, head of Rochan Consulting.

Russian forces have already triggered a humanitarian catastrophe in the east, reducing Mariupol to ruins, but they have failed to inflict defeat on Ukraine’s military.

Russia’s next aim will be to push south to encircle Slovyansk, a city of 125,000 people that already experienced war at close hand when it was seized by Russian-backed forces in 2014 before being recaptured.

“What is the goal of the Russian troops? They want to capture Donbas and the south of Ukraine,” President Zelenskyy said in his nightly address on Saturday.

He said that Ukrainian forces too were shifting their attention eastward: “We are aware that the enemy has reserves to increase pressure in the east.”
#Facebook
Add Comment