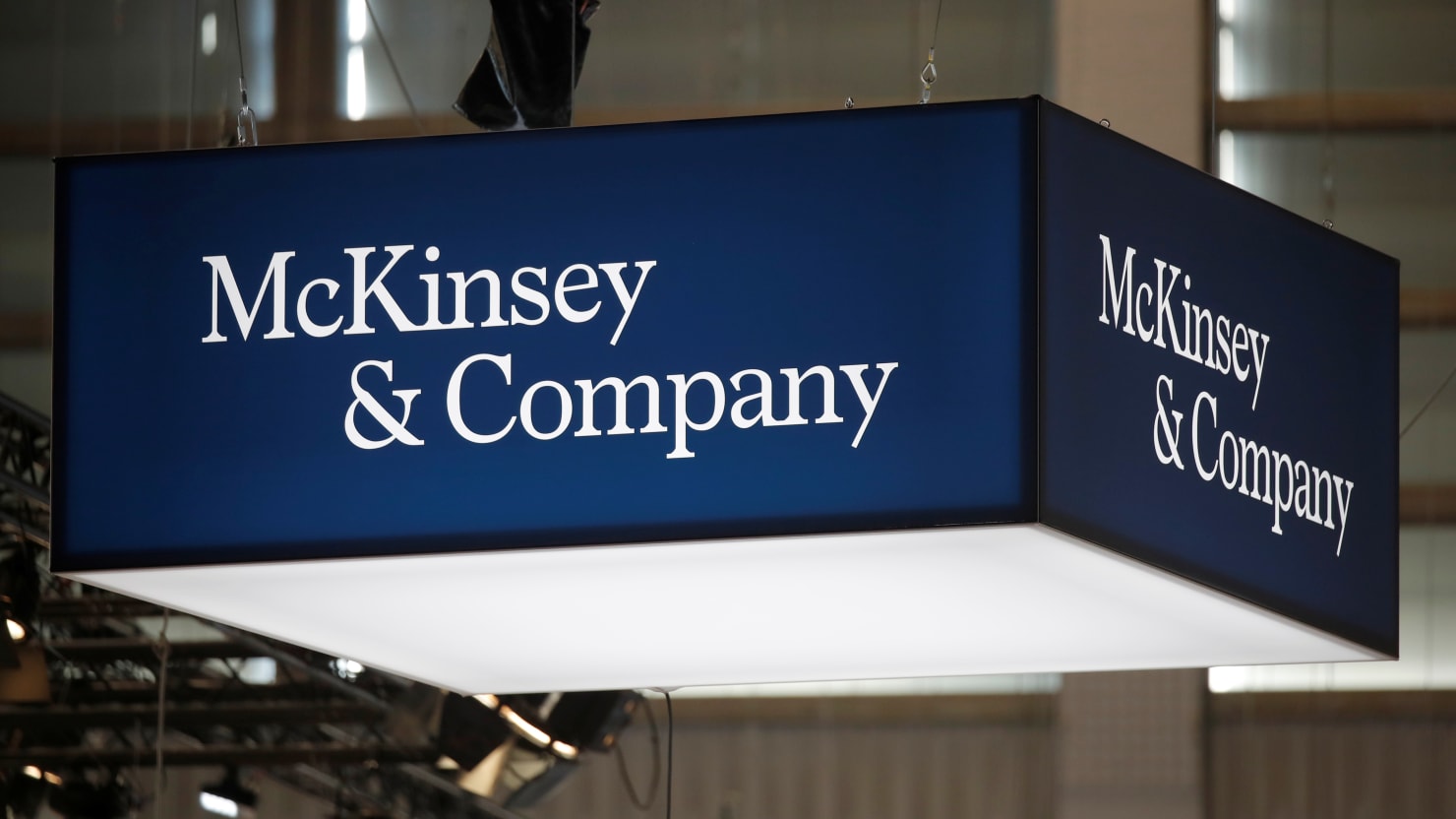 McKinsey Employees Revolt Over Its Work for Polluters

A letter signed by more than 1,100 employees has called for change at the consulting firm, which has advised at least 43 of the 100 most environmentally damaging companies.
A flame burns at an oil facility run by Saudi Aramco in the Rub al Khali desert. McKinsey has advised the energy company for decades.

As world leaders prepare to meet in Glasgow next week to address the devastating impact of wildfires, floods and extreme weather caused by rising greenhouse gases, a revolt has been brewing inside the world’s most influential consulting firm, McKinsey & Company, over its support of the planet’s biggest polluters.

More than 1,100 employees and counting have signed an open letter to the firm’s top partners, urging them to disclose how much carbon their clients spew into the atmosphere. “The climate crisis is the defining issue of our generation,” wrote the letter’s authors, nearly a dozen McKinsey consultants. “Our positive impact in other realms will mean nothing if we do not act as our clients alter the earth irrevocably.”

Several of the authors have resigned since the letter, which has never before been reported, came out last spring — with one sending out a widely shared email that cited McKinsey’s continued work with fossil fuel companies as a primary reason for his departure.

McKinsey publicly says that it is “committed to protecting the planet” and that it has helped its clients on environmental issues for more than a decade. On Oct. 15 it held a Climate Action Day, updating employees on progress toward its goal of having a net-zero carbon footprint by 2030. Yet McKinsey’s own carbon footprint is minuscule compared with that of many of the companies it advises.

Until now, McKinsey has largely escaped scrutiny of its business with oil, gas and coal companies because it closely guards the identity of its clients. But internal documents reviewed by The New York Times, interviews with four former McKinsey employees and publicly available records such as lawsuits shed new light on the extraordinary scope of that work.

Among the 100 biggest corporate polluters over the past half-century, McKinsey has advised at least 43 in recent years, including BP, Exxon Mobil, Gazprom and Saudi Aramco, generating hundreds of millions of dollars in fees for the firm.

Across the world, from China to the United States, McKinsey’s work with these companies is often not focused on reducing their environmental impact, but rather on cutting costs, boosting productivity and increasing profits.

A coal-burning power plant in South Africa run by Eskom, which McKinsey has advised.Joao Silva/The New York Times
In 2018, those clients alone — not including scores of other polluters advised by McKinsey — were responsible for more than a third of global carbon emissions, based on figures from the Climate Accountability Institute, a nonprofit that tracks corporate emissions and fossil fuels burned by customers of these companies.

Climate Fwd A new administration, an ongoing climate emergency — and a ton of news. Our newsletter will help you stay on top of it.

D.J. Carella, a spokesman for McKinsey, said in a statement that reducing emissions worldwide “requires engaging with high-emitting sectors to help them transition.”

“Walking away from these sectors might appease absolutist critics,” he said, “but it would do nothing to solve the climate challenge.”

Yet it is McKinsey, with its 95-year history and its position at the apex of the consulting world, that stands out. Its corps of consultants, peppered with Rhodes scholars and Harvard Business School standouts, could focus their talents on helping the firm’s oil, gas and coal clients cut their emissions. But these well-funded clients, such as Chevron, Shell and Canada’s Teck Resources, hire McKinsey to further business goals that often have little connection with the global push to limit greenhouse gases.

McKinsey’s ties to the fossil fuel sector run deep. More than a half-century ago, Mobil, Shell and Texaco helped propel McKinsey into the top ranks of consulting firms.

Within weeks of stepping down from his role as McKinsey’s managing partner in 2018, Dominic Barton was named chairman of Teck, a Vancouver-based company that blasts mountains in the Rockies to find coal for steel mills. Teck is one of the world’s biggest exporters of steel-making coal, and in 2019 its reported carbon footprint — when accounting for the coal burned by its customers — was equivalent to one-tenth of Canada’s greenhouse gas emissions.

The first full year after Mr. Barton arrived at Teck, McKinsey’s work there surged. Its projects included one at a mine in British Columbia called “Coal Processing Optimization.” Another assignment was simply labeled “Drill and Blast,” McKinsey records show. In its annual report for 2019, Donald R. Lindsay, Teck’s chief executive, said that a project that McKinsey consulted on helped to “improve productivity and lower costs.”

In Asia, McKinsey distributed a video boasting that it had helped increase production at a coal company by 26 percent, according to a memo written in 2019 by Erik Edstrom, a departing McKinsey consultant who was concerned about the firm’s environmental impact. “It appears that McKinsey helped our client extract more, pollute more, for presumably a long time to come,” he wrote.

Mr. Barton, who left Teck in 2019 when he was named Canada’s ambassador to China, did not respond to a request for comment made through Canadian government press officers. A spokesman for Teck, Chris Stannell, said in a statement that the company “is committed to supporting global action on climate change, and we are taking action to reduce our GHG emissions, including setting the goal of being carbon-neutral across our operations by 2050.”

Mr. Carella said it was “deeply misleading” to focus on one company, Teck, “as evidence that McKinsey’s work exacerbates climate change,” though The Times provided the consulting firm with a list of 43 major carbon polluters that have recently been clients.

He said that the firm was investing in sustainability efforts and that until the world weaned itself from fossil fuels, “billions of people around the world, especially in emerging economies, will rely on the jobs, energy, and materials that the companies you cite provide.”

McKinsey’s power to influence decisions by many of the biggest international polluters is the reason a group of about a dozen consultants sent the open letter last spring. It gathered more than 1,100 co-signers as it spread across the firm’s global operations, according to three former McKinsey employees who requested anonymity to discuss confidential business matters.

The authors said that McKinsey’s failure to address its clients’ emissions “poses serious risk to our reputation, our client relationships, and our ability to ‘build a great firm that attracts, develops, excites, and retains exceptional people.’” But the moment also presented McKinsey with a “significant opportunity,” they wrote.

They proposed that McKinsey not only redress its own emissions, but also publicly disclose the amount of carbon pollution that its clients produced in aggregate and commit to helping them do their part to limit the global temperature increase to 1.5 degrees Celsius. Beyond that threshold, scientists say, the dangers of global warming would skyrocket.

McKinsey has “a moral obligation to take action to influence our clients’ emissions and to show the leadership our stakeholders expect of us,” the authors said.

On April 5, the firm’s managing partner, Kevin Sneader, as well as his designated successor, Bob Sternfels, responded to the open letter. In a memo, they said that they “share your view that the climate issue is the defining issue for our planet and all generations” and that they would discuss the firm’s direction on climate change on Earth Day, April 22, in a companywide “ask me anything” event.

Before that event, Mr. Sneader announced that McKinsey would help its clients reduce their emissions to meet the 1.5-degree goal. “Our aim is to be the largest private-sector catalyst for decarbonization,” he said.

Mr. Sneader and Mr. Sternfels, who succeeded him in July, made it clear on the Earth Day call that McKinsey would continue to serve the big polluters. Their message: McKinsey had to continue working with them to stay relevant, according to a summary obtained by The Times.

The McKinsey spokesman said the firm had already addressed the issues the letter raised when it was sent, and had created a new platform to help clients cut their emissions. But the steps McKinsey took didn’t satisfy everyone.

In late July, Rizwan Naveed, one of the authors of the letter whose work at McKinsey focused on energy and decarbonization, sent an email to hundreds of colleagues. He was leaving McKinsey — one of several such departures in recent months, former employees said.

“Having looked at the actual hours billed to the world’s largest polluters, it is very hard to argue today that McKinsey is the ‘greatest private sector catalyst for decarbonization,’” he wrote. “It may well be the exact opposite.”
Add Comment