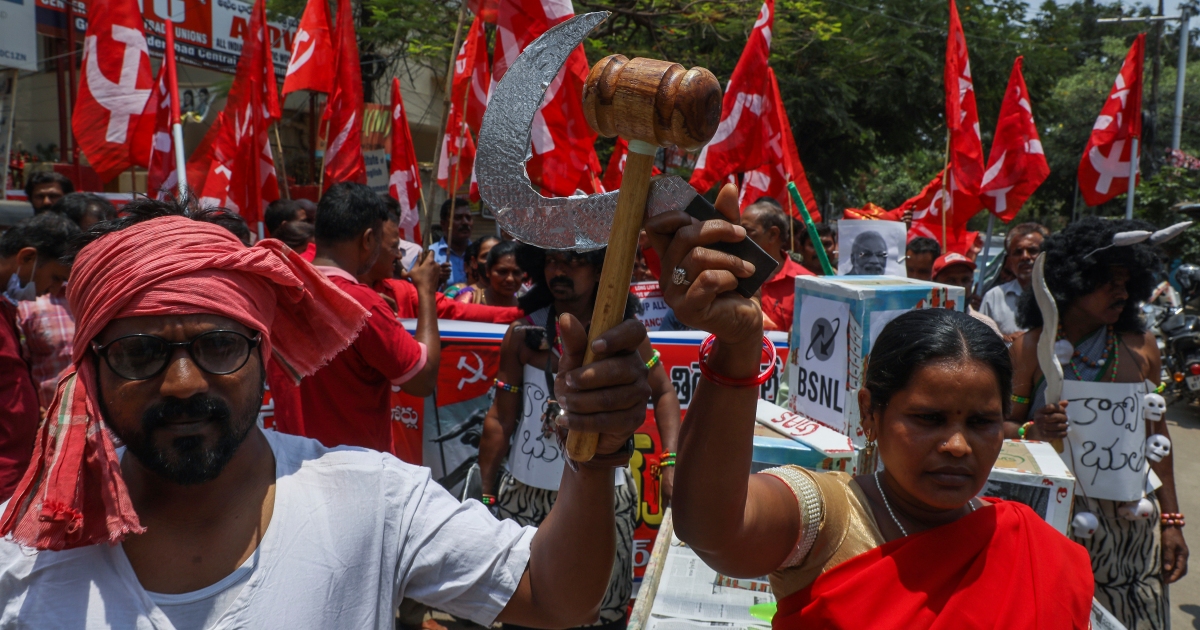 Peace was an underlying theme on May Day with calls for an end to Russia’s war in Ukraine.

Citizens and trade unions have rallied around the world to mark May Day, sending messages of protest to their governments and issuing calls for peace in Ukraine.

It is a time of high emotion for participants and their causes, and Sunday’s May Day marches were no different with police at the ready as street demonstrations commemorated International Workers’ Day, or May Day.

The war in Ukraine was also front and centre of this year’s May Day messages, with national leaders and union officials calling for peace and also warning that Russia’s war could spread further in Europe.

Turkish police moved in quickly in Istanbul and encircled protesters near the barred-off Taksim Square – the site in 1977 where 34 people were killed during a May Day event when shots were fired into the crowd from a nearby building.

Istanbul governor’s office said that police detained 164 people for demonstrating without permits and resisting police at the square. An official May Day gathering in the city also drew thousands of participants singing, chanting and waving banners – a demonstration organised by the Confederation of Progressive Trade Unions of Turkey.

Tens of thousands of people marched in the Sri Lankan capital Colombo to demand the resignation of President Gotabaya Rajapaksa and his government. 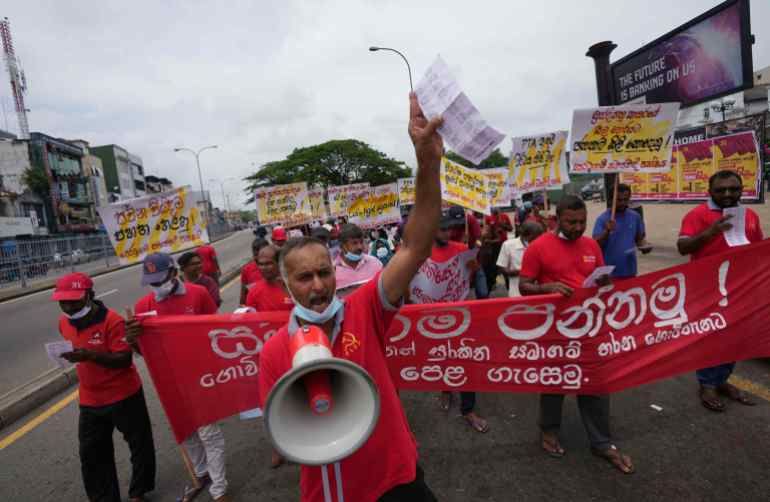 As part of protests marking May Day, marchers waved red flags and chanted slogans outside the president’s offices, renewing their call for him and his brother, who is the prime minister, to step down over an unprecedented economic crisis that has seen Sri Lanka suffer shortages of fuel, gas and medicines as well as rising food prices.

Rajapaksa has been forced to remain indoors for the past three weeks at the heavily barricaded President’s House, located 300m away from his office, as protestors remain camped outside.

The ruling Sri Lanka Podujana Peramuna party was forced to call off its May Day rally in view of the ongoing protests. Police said most of the government’s cabinet members remain under heavy police protection at their homes.

Many Chinese marked a quiet May Day this year as the government’s “zero-COVID” approach has restricted travel and enforced lockdowns in multiple cities. Millions remain restricted to their buildings or compounds in Shanghai, China’s largest city, under a lockdown that has only slightly eased. All Beijing restaurants were closed to dine-in customers on Sunday and could offer only takeout and delivery through the end of the national holiday on Wednesday.

Cuban President Miguel Diaz-Canel and retired leader Raul Castro headed a huge march in Havana where hundreds of thousands of Cubans lined the streets of the capital waving banners and pictures of Cuban revolutionary leaders, local media reported. May Day marches in Cuba are rife with symbolism, a celebration of the 63-year-old Cuban revolution and a government-led rebuke of the Cold War-era embargo imposed on the island by the US.

“Despite so many difficulties, the majority of Cubans support the revolutionary process. We Cubans work to fix our own problems. We do not want interference of any kind,” said Juana Garcia, a worker with the Cuban Institute for Philosophy, as she participated in Sunday’s celebrations.

The rallies this year were also the first since anti-government protests in July 2021 – the largest since Fidel Castro’s 1959 revolution – that rocked the nation, a major test of the island’s first non-Castro led government since the start of the revolution. 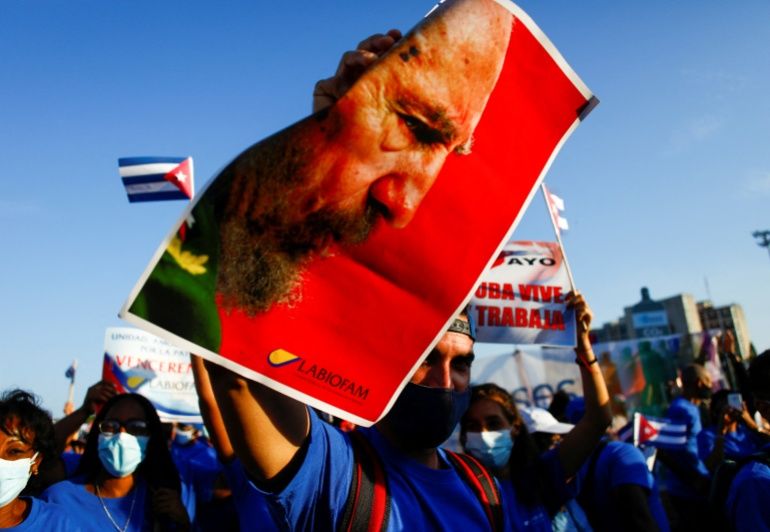 A man holds a photograph of late Cuban President Fidel Castro as thousands march on Revolution Square to mark May Day, in Havana on May 1, 2022

May Day rallies in France – taking place a week after the presidential election – were aimed at showing newly re-elected President Emmanuel Macron the opposition he could face in his second five-year term in office.

Around 250 protest rallies were planned across the country, with a focus on Paris where Communist-backed CGT union members were leading the main march through eastern parts of the city, and were joined by a handful of other unions. All are pressing Macron for policies that put the people first and condemning his plan to raise the retirement age from 62 to 65.

The marchers carried banners reading “Retirement Before Arthritis”, “Retirement at 60, Freeze Prices”, and “Macron, Get Out”. 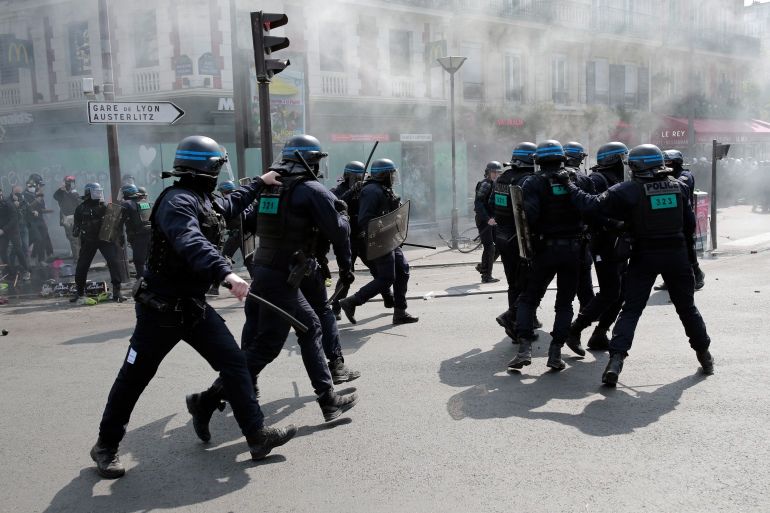 Riot police officers take positions during a May Day demonstration march from Republique, Bastille to Nation, in Paris, France on Sunday, May 1, 2022

Most of the rallies were peaceful but violence broke out in Paris at the start of the march near La Republique Square and when it reached La Nation Square. Black-clad anarchists, known as “Black Bloc”, ransacked a McDonald’s restaurant on the Place Leon Blum and trashed several real estate agencies. Their windows were broken and garbage bins set on fire.

Far-right leader Marine Le Pen was absent for the first time from her party’s traditional wreath-laying at the foot of a statue of Joan of Arc, who her party uses as a nationalist symbol. She was replaced by her National Rally party Interim President Jordan Bardella, who said Le Pen was preparing for forthcoming legislative elections.

Peace was an underlying theme on May Day, with calls for an end to Russia’s war in Ukraine.

In Italy, an outdoor mega-concert was set for Rome and Italy’s three main labour unions were focusing their main rally in the hilltop town of Assisi, a frequent destination for peace protests.

This year’s slogan was “Working for peace”.

Metro trains ground to a halt and ships were docked in ports as thousands of workers joined May Day rallies in the Greek capital to protest against soaring energy and food prices.

Police estimate that some 10,000 people marched in central Athens and gathered outside the Greek parliament over the cost of living that they say is becoming unaffordable – gas and power bills have surged, with price rises exacerbated by sanctions against Russia following its Feb. 24 invasion of Ukraine.

“It is very tough, and every day it gets tougher for workers. We will fight it, because the working class cannot survive anymore,” said Katerina Dekaristou, a teacher, standing outside the parliament.

In a May Day address, Bulgarian President Rumen Radev warned there is a risk of the war in Ukraine spreading across Europe -and even the world.

“The risk that the war will escalate into a pan-European and even a global [war] is real,” Radev said.

He said explosions are reverberating in the “heart of Europe”.

“Our homes, our children, our homeland and nature can fall victim to this escalation,” he warned.

Considered pro-Russian, Radev went on to say it was a “patriotic duty” not to allow Bulgaria to become involved in the Ukraine war. He thus stands in opposition to Bulgaria’s Prime Minister, Kiril Petkov, who wants to send arms deliveries from Bulgaria to Ukraine. The National Assembly in Sofia is to weigh the possibility of sending military aid to Kyiv on Wednesday.

May Day celebrations in Germany also focused on the Russian invasion of Ukraine alongside more traditional social issues.

German Chancellor Olaf Scholz warned that the war in Ukraine could bring about a global food crisis during his address to a rally in Dusseldorf.

“Already we have to worry that there are those who will starve, that there are countries that can no longer afford grain for their people, that this whole war situation will also lead to a worldwide hunger crisis,” Scholz continued, referring to the fact that Ukraine, one of the world’s great bread baskets, is largely unable to export its grain due to the war.

“I call on the Russian president: Let the weapons be silent! Withdraw your troops! Respect the sovereignty and independence of Ukraine!”

Other May Day protests were scheduled including in Slovakia and the Czech Republic, where students and others planned to rally in support of Ukraine.