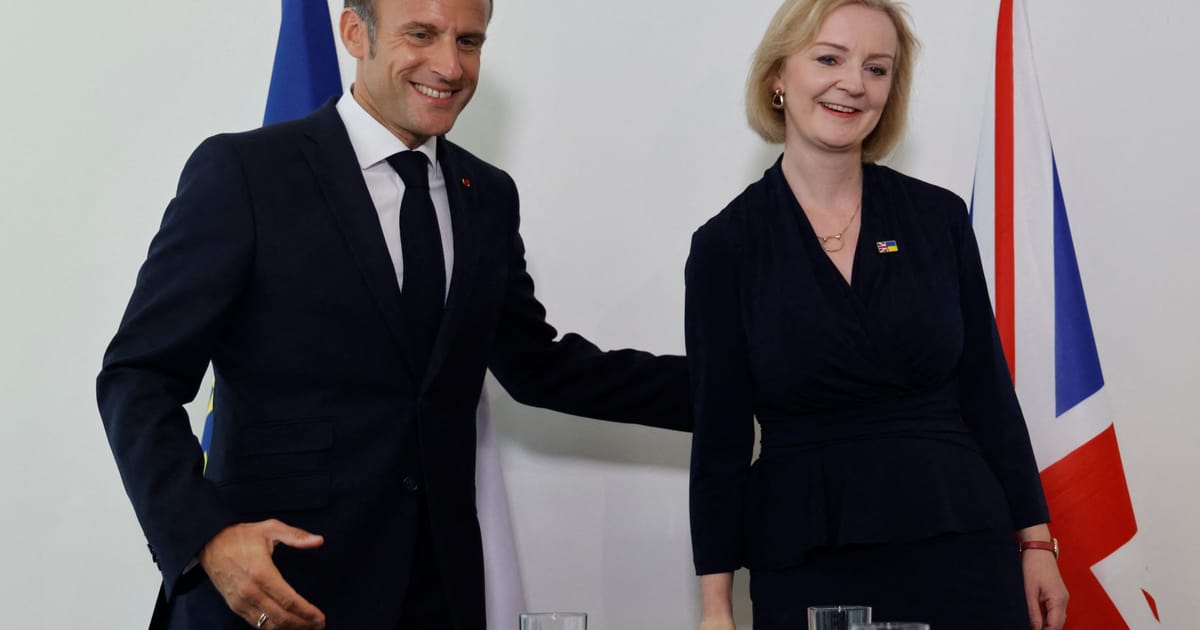 Macron to Truss: Let’s be friends

French president senses ‘will to re-engage’ after new UK leader questioned whether he is a ‘friend or foe.’

Emmanuel Macron praised Liz Truss’ “will to move forward” as the pair met for the first time since the British prime minister said “the jury is out” on whether they’d be friends or adversaries.

The French and British leaders met on the sidelines of the U.N. General Assembly Tuesday where they discussed energy security and the importance of staying the course in Ukraine.

Yet they did not discuss two hot-button issues that have dominated the Anglo-French relationship in recent years — the post-Brexit Northern Ireland protocol for trade or migration across the Channel.

In her campaign to become leader of the Conservative Party, Truss sparked anger as she vowed to judge the French president by his “deeds not words,” and warned “the jury is out” on whether he is Britain’s “friend or foe.”

Speaking after their meeting, Macron extended a somewhat pointed olive branch, telling reporters: “I believe in proofs and results. There is a will to re-engage, to move forward, and to show that we are friends and allies in a complex world.”

Truss struck a conciliatory note ahead of the meeting, telling reporters she wanted to work “constructively” with the French president.

The U.K. leader’s spokesman said afterward “that was the tone and tenor of the bilateral meeting,” while it was described by the French side as “relaxed.”

They denied the Northern Ireland protocol — the source of a protracted and ongoing row between Brussels and London — had been left aside because it was too politically difficult, saying: “We want to resolve this with the EU and this is not an issue which can necessarily be resolved by one single EU country.”

However, Truss will not be able to avoid the subject Wednesday when she meets European Commission President Ursula von der Leyen and U.S. President Joe Biden.

Biden’s national security adviser, Jake Sullivan, said at a press briefing Tuesday the pair will talk about Northern Ireland “in some detail.”

Biden will communicate his “strong view that the Good Friday Agreement must be protected,” he added, and would “encourage the U.K. and the European Union to work out an effective outcome.”

The two are also expected to discuss the U.S. and the U.K.’s economic relationship — although the pair have starkly different economic visions, as illustrated by a Biden tweet Tuesday making clear he is “sick and tired” of “trickle-down economics.”

It came as Truss defended plans to cut business taxes and potentially lift a cap on bankers’ bonuses.