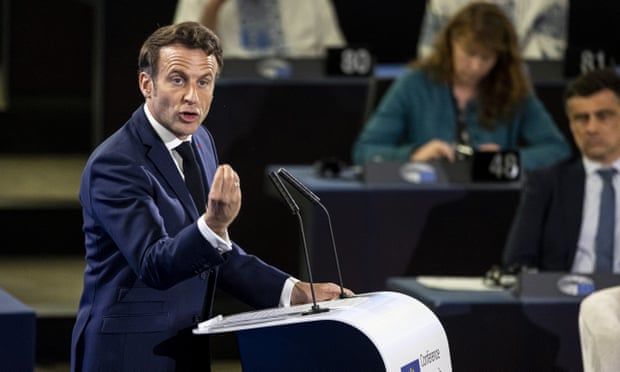 French president says European Union ‘cannot be the only way to structure the continent’
Emmanuel Macron has called for a new political organisation to unite democracies on the European continent, as he warned that Ukraine would probably not join the EU for several decades.

Speaking two days after being sworn in for a second term as French president, Macron called for big thinking on the future of Europe, saying the war in Ukraine showed the need for a “historic process of reflection”.

He proposed “a European political community … a new European organisation [that] would enable democratic European nations who adhere to our values to find a new space for political cooperation”, listing security, energy, transport, infrastructure investment and movement across borders, especially for young people, as issues that body would tackle.

Being part of this organisation would not exclude a country from joining the EU, and the organisation could include “those who have left” the bloc, he said.

Macron’s intervention comes as EU states clash on how quickly to move forward with Kyiv’s membership application. The question is likely to reach a crunch point in June, when EU leaders decide whether to grant Ukraine candidate status, a procedural step that normally takes years to attain.

Macron suggested he favoured a quick decision on candidate status, while dampening Kyiv’s hopes of a speedy entry into the EU. The awarding of candidate status is followed by talks on accession and a process of reform so that a country meets the EU’s political, economic and legal criteria.

“Even if we were to give it the status of candidate country tomorrow – I hope we move forward towards accession rapidly – even if we were to do that, we all know only too well the process for accession would take several years; in truth, it would probably take several decades. And that is the truth unless we decide to lower the standards for accession and rethink the unity of our Europe, and also partially the principles that we hold,” he said.

“The European Union, given its level of integration and ambition, cannot be the only way to structure the European continent in the short term.”

Ursula von der Leyen, the European Commission president, is championing a speedy processing of Ukraine’s membership application, backed by central and eastern European states. Western European members, however, are wary about allowing Ukraine to proceed quickly, fearing Kyiv would not have time to complete vital political reforms, while the process would stoke tensions with six western Balkan countries that have been stuck in the EU membership queue for years.

Von der Leyen said Ukraine had submitted a 5,000-page document to Brussels answering questions on its suitability to join the bloc, and in remarks aimed at Ukrainians at an event in the European parliament to celebrate Europe Day, she said: “The future of Europe is also your future.”

Macron also set out goals for the war, saying Europe had “to do everything to ensure that Ukraine will survive, Russia will never win, preserve peace on the rest of the continent of Europe and avoid any escalation”.

Only Ukraine could decide on negotiating conditions with Russia, he said. And he warned against a punitive settlement on Russia when the war is over. “When peace returns to European soil, we will have to build new security balances and together we must never give into the temptation … or the desire for revenge, because we know how much that has ravished the road to peace in the past.”

The two leaders were speaking at a special session of the European parliament in Strasbourg, where they marked the end of an 11-month citizens’ juries project, the Conference on the Future of Europe. At the closing ceremony, EU leaders, citizens and MEPs listened to the EU anthem and watched an interpretative dance routine performed in the aisles of the parliament’s debating chamber.

Both leaders contrasted the event with the Victory Day commemorations in Moscow. Referring to a woman who appeared with her baby at the Strasbourg ceremony, Von der Leyen said she wanted to celebrate this image on 9 May, “an image far more powerful than any military parade going up and down the streets of Moscow”.

Away from the soaring rhetoric, the citizens project has triggered a row about whether the EU should change its treaties in response to its conclusions – 49 proposals covering the climate emergency, health and young people, among other themes.

Von der Leyen said treaty change could not be excluded, while Macron said he supported proposals to convene a convention to revise the treaties. But a group of 13 Nordic, central and eastern European countries hit back at people seeking to “instrumentalise” the Conference on the Future of Europe, probably a reference to federalists in the European parliament.
Add Comment