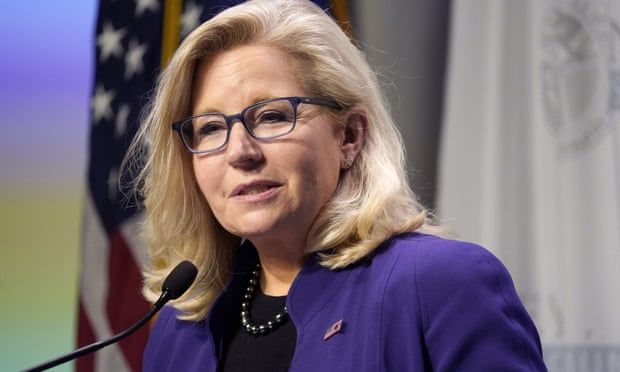 Liz Cheney does not regret vote against Trump Ukraine impeachment

Liz Cheney, one of two Republicans on the January 6 committee, does not regret her vote against Donald Trump’s first impeachment, for withholding military aid to Ukraine in an attempt to extract dirt on rivals including Joe Biden.

But Cheney also said on Sunday she was focused on lessons learned from that impeachment as she pursues the investigation of the deadly Capitol attack, the event which led to Trump’s second Senate trial.

Cheney and Adam Kinzinger, the other Republican on the January 6 panel, were among 10 House Republicans who voted to impeach Trump second time round, for inciting an insurrection.

Kinzinger has said that in light of Russia’s invasion of Ukraine, he regrets backing Trump in his first impeachment.

In an interview with NBC’s Meet the Press, Cheney was asked about her vote against impeachment on Ukraine.

“The January 6 situation and attack is obviously something that is fundamentally different. We all watched that unfold in real time. We all lived through that attack.”

Supporters Trump told to “fight like hell” in service of his lie about electoral fraud attacked the Capitol in an attempt to stop certification of Joe Biden’s victory. A bipartisan Senate report connected seven deaths to the riot and around 800 people have been charged.

Kinzinger will retire at the midterm elections in November, rather than face a Trump-endorsed challenger. Cheney will fight it out. Though a stringent conservative, on January 6 at least the daughter of the former defense secretary and vice-president Dick Cheney has emerged as a rare figure able to bridge the partisan divide.

On NBC, she was asked if the January 6 committee would make criminal referrals – the subject of intense speculation, particularly regarding Trump as he flirts with another run for the White House.

“Our first priority is to make recommendations,” Cheney said. “And we’re looking at this, like do we need additional enhanced criminal penalties for the kind of supreme dereliction of duty that you saw with President Trump when he refused to tell the mob to go home after he had provoked the attack on the Capitol.

“So there will be legislative recommendations, and there certainly will be information.

“And I can tell you, I have not learned a single thing since I have been on this committee that has made me less concerned or less worried about the gravity of the situation and the actions that President Trump took and also refused to take while the attack was under way.”