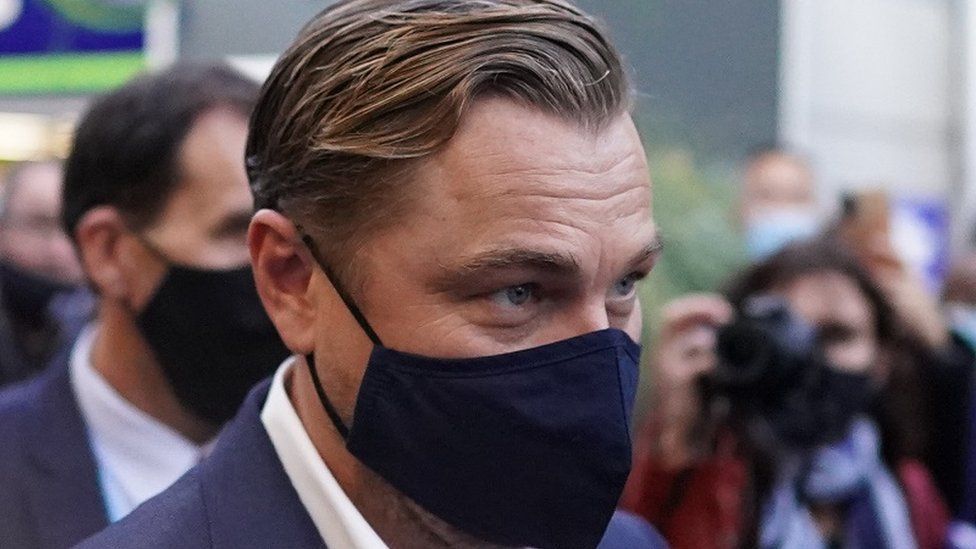 Actor and environmental campaigner Leonardo DiCaprio has arrived in Glasgow for the COP26 summit.

The Hollywood star, who is a UN climate change representative, was seen at the Kew Carbon Garden exhibit on Tuesday at the main conference centre.

He was mobbed by journalists, fans and delegates as he entered the building.

Glaswegians expressed mock surprise at sightings of the Hollywood superstar and other famous faces, with one local tweeting: "President of the USA outside Greggs and Leonardo DiCaprio in Maryhill. What is this alternative reality Glasgow is living in at the moment?"

The COP26 summit is being attended by leaders from around the world, with 200 countries being asked for their plans to cut emissions by 2030.

DiCaprio has donated millions to environmental organisations and backed ventures such as those producing trainers made from natural materials.

He also described campaigner Greta Thunberg as a "leader of our time" when they met in 2019.

At the 2016 Oscars, he made a speech declaring climate change to be "the most urgent threat facing our entire species".

However, at the time, an article published on Forbes website declared the actor's decadent lifestyle meant his "carbon footprint is much higher than he thinks."

The actor expressed concern himself about this in his 2016 documentary for National Geographic, Before the Flood.

DiCaprio has recently been photographed flying commercially rather than by private jet although it's not known how the actor travelled to Scotland this week.

The 46-year-old is best known for hit films including The Revenant, Once Upon A Time In Hollywood, The Wolf of Wall Street, Shutter Island, Inception, The Great Gatsby, Blood Diamond and Django Unchained.

*  Climate change is one of the world's most pressing problems. Governments must promise more ambitious cuts in warming gases if we are to prevent greater global temperature rises.


*  The summit in Glasgow is where change could happen. You need to watch for the promises made by the world's biggest polluters, like the US and China, and whether poorer countries are getting the support they need.


*  All our lives will change. Decisions made here could impact our jobs, how we heat our homes, what we eat and how we travel.