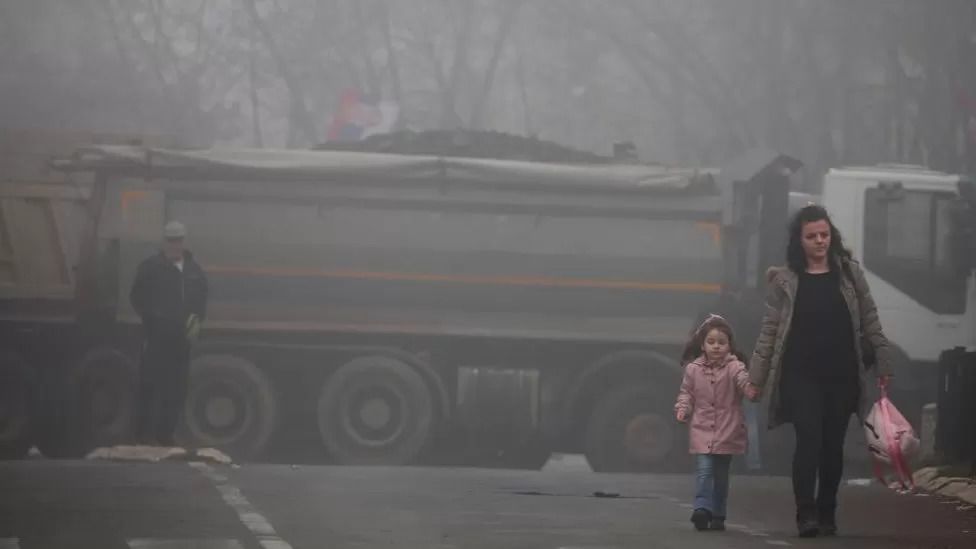 The Serbian army says it is at its "highest level of combat readiness" after weeks of escalating tensions between Serbia and Kosovo.

President Aleksandar Vucic says he will "take all measures to protect our people and preserve Serbia".

The sabre-rattling is louder than ever and follows some media claims in Serbia that Pristina is preparing "an attack" on ethnic Serb areas in north Kosovo.

The government in Pristina has made no comment about the allegations.

But it has previously accused Mr Vucic of playing "games" to stir up trouble.

Kosovo, which has an overwhelmingly ethnic Albanian majority, broke away from Serbia after a war in 1998-99. Serbia does not recognise Kosovo as an independent state, nor do the ethnic Serbs who live there.

Belgrade accuses Kosovo of plotting "terrorism against Serbs" in areas where some 50,000 ethnic Serbs live.

In return, Pristina says Belgrade is behind "paramilitary formations" that set up roadblocks in majority Serb areas of north Kosovo on 10 December.

The European Union has been attempting to mediate. The 27-member bloc is calling for "maximum restraint and immediate action" and for the leaders of Serbia and Kosovo to "personally contribute to a political solution".

Belgrade has increased its armed presence on the border in recent days after conflicting reports about a shooting incident in which no-one was hurt. Reports from Belgrade alleged ethnic Serbs came under attack, but the claim was rejected by Kosovo authorities in Pristina.

Nevertheless, Serbia appeared to use the reports to justify intensifying its military presence on the border.

So far, hostilities have been limited to harsh words, then on Monday, Serbia placed its army on combat alert. Kosovo has warned that if Nato's KFOR peacekeeping force does not remove the roadblocks, then it will take matters into its own hands.

Nato, which has some 3,700 peacekeeping troops in Kosovo, has called on all parties to avoid provocations. For years, its KFOR troops have played a crucial role in guaranteeing the peace. The European Union, which has a rule-of-law mission in Kosovo, has warned it will not tolerate attacks on EU police or criminal acts.

It is a worryingly combustible situation. Tensions between Belgrade and Pristina have ebbed and flowed since Kosovo's unilateral declaration of independence from Serbia in 2008.

But they have been running particularly high over the past few months, with ethnic Serbs withdrawing all co-operation with Kosovo authorities. 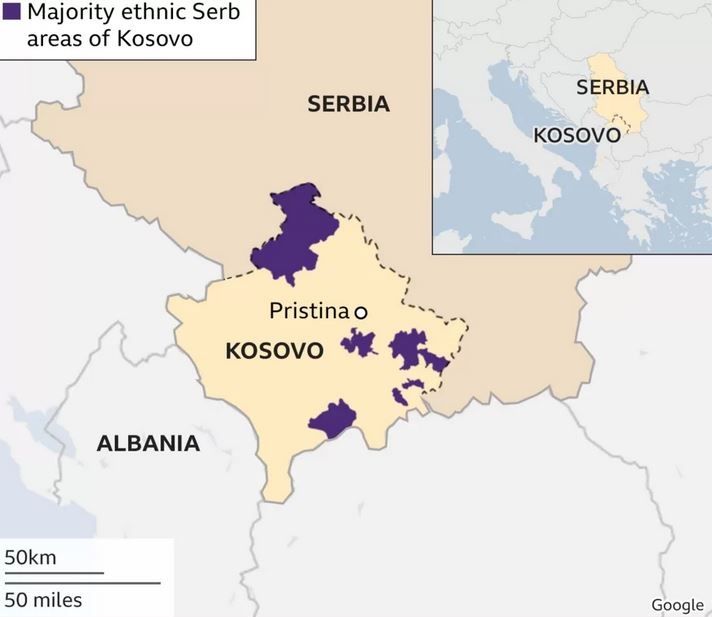 The trigger was, of all things, a row over number plates. Pristina demanded that ethnic Serbs should surrender the Serbian-issued vehicle licence plates that they had continued to use and replace them with "Republic of Kosovo" plates.

For both sides, the symbolism was significant.

For Pristina, it was a matter of asserting its sovereignty. For Kosovo Serbs, number plates represented their identity. Only a handful made the swap before the deadline.

Pristina's plan to impose fines on the holdouts sparked last month's mass resignation of ethnic Serbs from all of Kosovo's national institutions. This included police, with more than 600 ethnic Serb officers handing in their badges.

An EU-mediated compromise agreement on the number plates has not convinced them to return. Instead, Belgrade is insisting that Kosovo should honour a pledge made in a 2013 Brussels agreement to grant Serbs limited autonomy through an association of majority Serb municipalities.

The European Union has urged Pristina to set up the association. But Kosovo's Prime Minister, Albin Kurti, is firmly against the idea. He believes it would result in a mini-state within Kosovo controlled by Serbia.

With no sign of a diplomatic breakthrough, the barricades appeared after an ethnic Serb former police officer was arrested on suspicion of attacking the Kosovo force.

Crossing points between north Kosovo and Serbia are blocked. And on Tuesday morning, new roadblocks were set up in North Mitrovica, Kosovo's largest majority Serb town.

International elements are also a factor. Kosovo has accused Serbia of doing Russia's bidding by stirring up trouble in the Western Balkans, to distract attention from the war in Ukraine.

Special envoys from the US and the EU have put weeks into shuttle diplomacy. But so far, they have failed to bring Kosovo and Serbia to the negotiating table.

Nato peacekeepers are facing calls from Belgrade to protect Serbs, as well as demands from Pristina to dismantle the barricades.

EU pleas for maximum restraint had a slightly desperate tone. It may be the festive season - but goodwill remains in short supply in this simmering dispute.
Add Comment