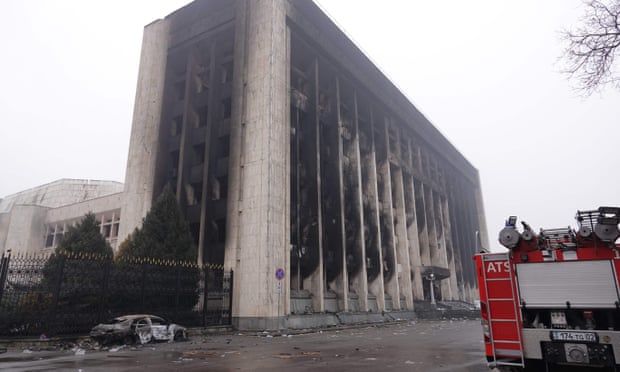 Kazakhstan president vows to destroy ‘bandits and terrorists’ behind protests

The president of Kazakhstan, Kassym-Jomart Tokayev, has promised an uncompromising crackdown on demonstrators in the country, telling security forces they should “use lethal force without warning” against protesters he called “bandits and terrorists”.

On Friday, relative calm returned to Almaty, Kazakhstan’s largest city and the centre of recent tumult, and some residents ventured out for the first time in several days. They found looted shops, shattered glass and many burnt-out cars, with the grim atmosphere intensified by the thick mist enveloping the city.

Police returned to the central streets for the first time since the clashes turned violent and protesters seized government buildings. The military had sealed off a square where clashes took place earlier in the week, and gunshots rang out occasionally.

The interior ministry has said 26 protesters were killed in the clashes as well as 18 people from police and security forces. Witness reports of shootouts and casualties suggest that the real figures may be considerably higher. More than 3,800 people had been detained, the ministry said. 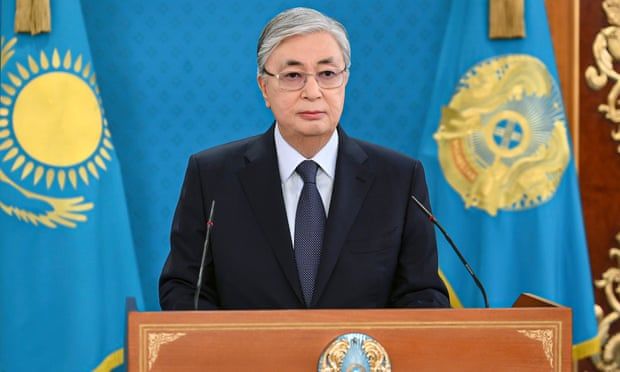 Kassym-Jomart Tokayev gave an address on TV on Friday.

In a televised address on Friday, Tokayev said he had personally given the order to use lethal force in recent days, and also blamed “so-called free media outlets” for helping to fan unrest.

“Abroad there are calls for the two sides to hold negotiations for a peaceful resolution,” he said. “What idiocy. What kind of negotiations can you have with criminals? We were dealing with armed and well-prepared bandits, both local and foreign. Bandits and terrorists, who should be destroyed. This will happen in the nearest time.”

Promising the crackdown would continue, Tokayev said he had created a special inter-agency group to track down violent protesters. He claimed that “all demands made in a peaceful form have been heard”, but appeared to dismiss a large proportion of the protesters as criminals, saying “20,000 bandits” were involved in Almaty alone. This suggested a large-scale operation could be launched to hunt down others.

The protests were sparked this week by a sudden rise in fuel prices combined with long-simmering frustrations over the political and economic situation in the country. The peaceful demonstrations turned violent on Wednesday, with crowds seizing government buildings and widespread looting.

Tokayev’s response included accepting the resignation of the government and announcing fixed fuel prices, but also ordering the crackdown. The airport in Almaty is closed to all but military traffic until at least Sunday, and is being guarded by “peacekeeping forces” sent by Russia and other nations from the Collective Security Treaty Organization (CSTO).

With reliable information scarce and rumours rife, there was confusion in Almaty about the exact sequence of events in recent days. Many said initial peaceful protests appeared to have been subverted by seemingly well-organised groups of rioters, particularly on Wednesday when the police seemed to leave key installations in the city unprotected.

The Almaty-based journalist Ardak Bukeeva said she had spoken to several people who claimed to have been shot at while standing peacefully on Almaty’s Republic Square on Thursday evening. On Friday, she was told by an employee of one of the city’s hospitals that “very many” victims of gunshot wounds had been admitted. Officially, hospitals have given no information about the number of people being treated.

The communications blackout, together with a shutdown of the country’s banking system, has caused difficulties for many in contacting relatives or buying food, as shops were closed, bank cards did not work and the streets were dangerous.

A group on the messaging app Telegram offered to help people get in touch with relatives. Its founder said she had received more than 2,000 requests, including from Kazakhs stranded abroad, those with missing relatives, and hospital doctors trying to find the relatives of a police officer in intensive care.

Mobile internet and telephone service slowly returned on Friday, though in Almaty it was still sporadic.

In his address, Tokayev thanked Russia for sending troops but said they had not taken part in any fighting. The Russian defence ministry said Russian peacekeepers were guarding key infrastructure sites. The ministry said 75 planes were used to transport troops and equipment to Kazakhstan. The force totals about 2,500 personnel, the regional alliance has said.

The Kremlin said on Friday that the Russian president, Vladimir Putin, had discussed the situation in Kazakhstan with Tokayev in several phone calls. The Chinese president, Xi Jinping, praised Tokayev for “decisively taken strong measures at critical moments and quickly calming down the situation”. Meanwhile, the response from the west has been muted, a tacit admission that it has little sway over events in the country at a time when diplomatic attention is focused on deterring a Russian incursion into Ukraine.

Tokayev has insisted there was “foreign backing” for the protests, a claim he used to call for the CSTO deployment, and an accusation that has frequently been made by autocratic leaders in the region about protest movements. He has not provided any evidence of foreign backing so far.

Some analysts suggest that, along with the violence on the street, there could be a behind-the-scenes battle between different factions in the country’s elite. Nursultan Nazarbayev, the country’s first president who ruled from independence in 1991 until 2019 and handpicked Tokayev as his successor, has not been seen in public since the new year. Much of the anger of the past week has been directed against him, and there are rumours he may have left the country.