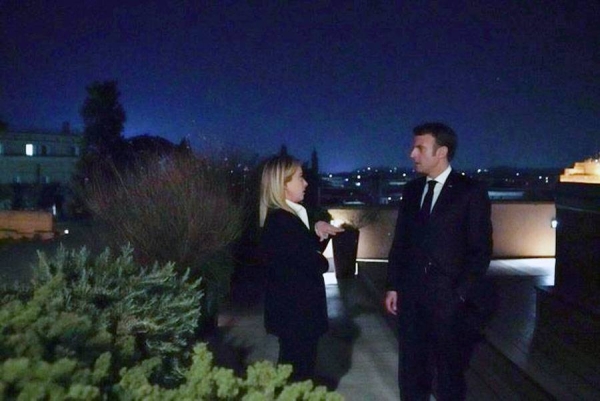 French President Emmanuel Macron and new Italian Prime Minister Giorgia Meloni held talks in Rome on Sunday in the first, though informal, meeting between the two political leaders.
Macron, who's currently on an official visit to Italy, wrote on Twitter that the two countries had to continue to work together "with dialogue and ambition."

Macron and Meloni discussed current European issues including the need to provide quick and common answers to increased energy prices, support for Ukraine and the management of migrant flows, Italy's prime minister's office said in a statement.

Before posting a picture of his meeting with Meloni, Macron posted a picture of outgoing Italian PM Mario Draghi, writing simply "Grazie Mario."

Meloni, Italy's first woman prime minister, formally took over from Draghi as head of government earlier on Sunday after she and her new Cabinet team were officially sworn in on Saturday in Rome, giving the country its most right-wing government since World War II.

Meloni's Brothers of Italy party has neo-fascist roots, but she sought to project a moderate image during the election campaign, dropping previous anti-EU rhetoric and pledging to keep Italy at the heart of European and Western institutions.