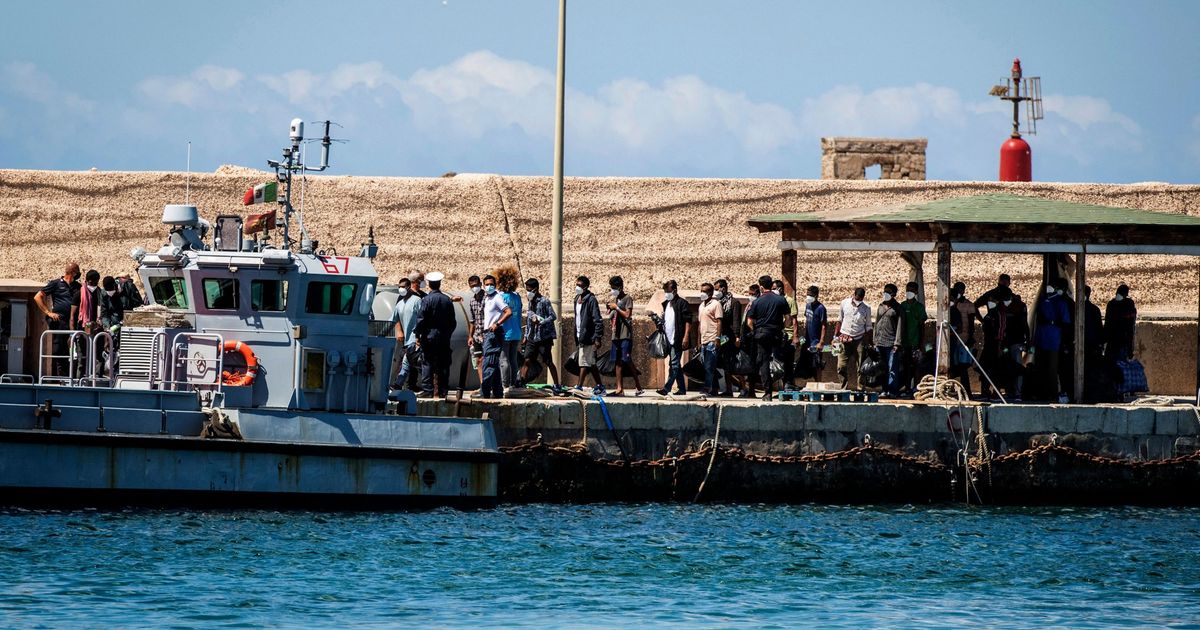 Reception center on Lampedusa is 500 percent over capacity as Italy’s right fire up election campaigns.

A wave of migrant boat landings on the Italian island of Lampedusa has put local reception services under huge pressure, in a development that is being seized on by the far right ahead of elections.

Italy is holding a snap vote in September after Prime Minister Mario Draghi lost the support of his governing coalition last week.

The Italian island of Lampedusa is experiencing difficulties with overcrowding after hundreds of migrants were dropped off there over the past few days. Lampedusa, just 100 kilometers off the coast of Tunisia, is the closest port of call for migrants fleeing hardship in Africa or seeking a new life in Europe.

As of Monday, a migrant reception center on the island, intended to house 350 people, is over capacity by 500 percent, with almost 1,900 migrants. Seven boat landings on Monday morning added to crowding.

The NGO rescue vessel Sea Watch 3 carrying another 400 people is also waiting to be allocated a safe port, although a child with burns and a pregnant woman were brought on shore already.

The new emergency is likely to be a boon for Italy’s hard-right politicians as they launch their election campaigns.

Former Interior Minister Matteo Salvini, leader of the League party, who is known for his hard-line stance on migrants, is looking to capitalize on the situation.

As interior minister between 2018 and 2019 Salvini closed migrant camps and ordered a crackdown on NGO migrant rescue vessels, blocking the ports.

While part of Draghi’s coalition government for the past 17 months, Salvini regularly sniped at Interior Minister Luciana Lamorgese. Salvini judged her to be inadequate at tackling migration and last week appealed to Draghi for her removal before the government collapsed.

Salvini seems to have his heart set on returning to the interior ministry if the right win the election, to be held on September 25.

Salvini tweeted about migrants five times on Sunday. One tweet said there was a need to “return to defending the Italian borders after the repeated failures of Lamorgese. Who will do it? The next interior minister?” he asked his followers. “What do you think friends?”

In the meantime the deputy mayor of Lampedusa Attilio Lucia, also a League member, has asked for Salvini’s help, saying the that migrants are sleeping on mattresses on the ground and sheltering under trees for shade. Law and order are also pressed he said. “The island cannot become a giant refugee camp.”

Salvini immediately changed his schedule to visit Lampedusa next week, saying he would “bring solutions.”

At a League event in Domodossola, northern Italy, over the weekend, Salvini told supporters that the League could come first in elections. “The first proposal that the League will bring to Cabinet will be a new security decree with a commitment to zero illegal immigrants around our country. Stop boats and immediately go home,” he said.

Salvini is currently on trial for kidnapping after refusing to allow migrants to land while interior minister, but is likely to turn the trial into an opportunity to rally support. The next hearing is a week before the September 25 election.

Salvini hopes to use the issue to make up ground on his rivals in the right wing coalition Brothers of Italy party, for whom immigration is also a central issue. Leader of Brothers of Italy Giorgia Meloni posted several tweets about migrants accused of violent crime over the weekend.