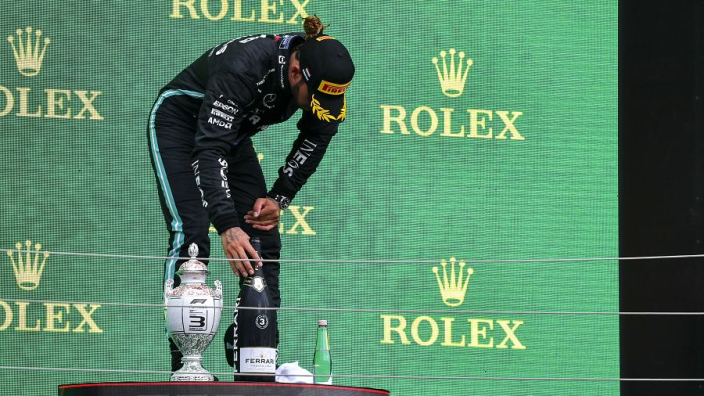 Lewis Hamilton has insisted potential lasting effects of his positive Covid-19 test last year are "not a concern" for the rest of this F1 season following his recent scare at the Hungarian Grand Prix.
The championship leader fought flat-out to recover from a dubious strategy call at the Hungaroring to battle through the field and back onto the podium but was clearly left feeling the effects during the ceremony.

Hamilton then missed the first part of the FIA's top-three press conference. When he eventually appeared, he suggested he was suffering from the effects of long covid after his positive test in Bahrain last season.

At the time, the seven-time F1 champion said: "I've been fighting all year with staying healthy after what happened at the end of last year, and it's a battle."

Ahead of this weekend's Belgian Grand Prix, the first race after the traditional summer shutdown, Hamilton was asked whether there were any concerns over his health ahead of his championship run-in with Max Verstappen.

"Well, naturally it is personal information but of course, I have spent time over this period just trying to make sure I am in the best shape," replied Hamilton.

"I do feel like I am in better shape moving into the second half of the season [so] it is not a concern for me.

"Naturally in the world, we are still in this pandemic and I still stress the importance that people stay safe.

"As you move around, you see people relaxing more and more but the virus is still around so we continue to be in our bubble.

"I will continue to be focused on my health and making sure I continue to get stronger through the rest of the year."
#COVID-19  #Covid
Add Comment