Germany's deadly floods were up to 9 times more likely because of climate change, study estimates

Record rainfall that triggered deadly floods in Western Europe in July was made between 1.2 and 9 times more likely by human-caused climate change, according to a new study.

At least 220 people were killed between July 12 and 15 -- mostly in Germany, though dozens also died in Belgium -- and homes and other buildings were destroyed in flash flooding that followed heavy rainfall. Some parts of the region experienced more rain in a single day than they would typically expect in a whole month.

The study, conducted by 39 scientists and researchers with the World Weather Attribution (WWA) project, also found that the most extreme rain was a once-in-400-year event, and that climate change increased the intensity of daily extreme rainfall by 3% to 19%.

"These floods have shown us that even developed countries are not safe from severe impacts of extreme weather that we have seen and known to get worse with climate change," Friederike Otto, the associate director of the Environmental Change Institute at the University of Oxford, said in a statement. "This is an urgent global challenge and we need to step up to it. The science is clear and has been for years."

The one-in-400-year frequency only refers to the particular region studied and does not mean it will be another 400 years until other parts of Europe, or the world, will see a similar weather event, explained Maarten van Aalst, a professor of climate and disaster resilience from the University of Twente in the Netherlands.

"In this case, [the projection for next year is] possibly worse because, year by year, if the trend so far is that the climate is increasing, the risk will continue to grow. So, if anything, we're expecting a higher chance of this happening next year than this year. But it's basically a one-over-400 chance every single year," van Aalst said at a news conference. 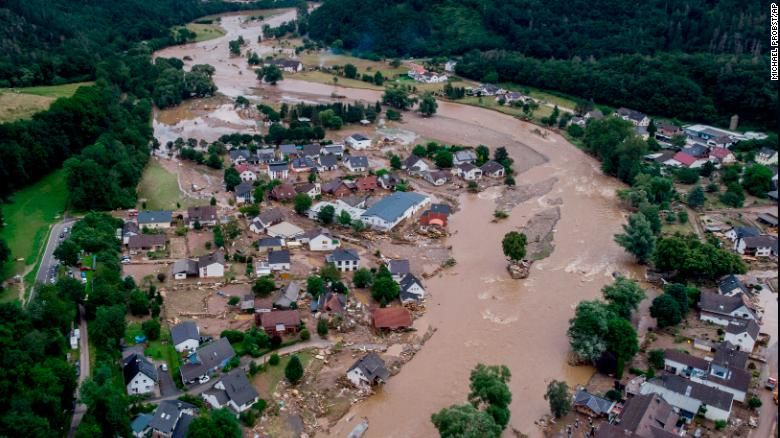 The scientists focused on the areas around the Ahr and Erft rivers in Germany and the Meuse in Belgium, where rainfall records were broken. But they also took into account what was happening across a larger region, including parts of France, the Netherlands, Luxembourg and Switzerland, to establish how the extreme weather event had been influenced by increasing global temperatures.

The scientists looked at weather records and used computer simulations to compare the picture today -- in a world that is 1.2 degrees Celsius warmer than it was in pre-industrial times -- to that of the late 1800s.

They warned that the warmer Earth gets, the more frequent and intense these rain events will be. Specifically, if global temperatures rose to 2 degrees above pre-industrial levels, the intensity of rain in a single day would increase by a further 0.8 to 6% and would be between 1.2 and 1.4 times more likely to happen, their models project.

Van Aalst said that the findings should be a "wake-up call" for governments and local leaders to improve their preparedness for extreme weather events, including looking at how homes are constructed so that children, the elderly and people with disabilities can reach safety in events like floods or fires.

"I hope it's a wake-up call also to people that have not just been affected by this one, but also people elsewhere -- because it's been heatwaves elsewhere, where I could tell a similar story," he said. "We are just facing more extreme events of many kinds, and the only thing we can do is, on the one hand, closing the tap off the increase in greenhouse gases to avoid the risk of getting further out of hand, and on the other hand, preparing for that more extreme climate."

The scientists acknowledged their estimate -- 1.2 to 9 times more likely, due to climate change -- was a wide range, and explained that the models they used and the data available to them around such localized events prevented them from narrowing their findings down further.

They were also missing crucial data, as some measurement stations were destroyed by the floods.

The study acknowledged that a number of conditions had worsened the severity of the floods, including that the soil in the region was already saturated, and that the terrain in some locations, with narrow valleys and steep sloping mountains, led "to funnel-like effects in the event of extreme floods." Those factors were taken into account in their models.

This summer, the Northern Hemisphere has experienced wide range of extreme weather events beyond deadly flooding, including record-breaking temperatures that in some instances have triggered wildfires in the US, Canada, Siberia, Algeria and southern Europe.

On August 14, rain fell on the summit of Greenland for the first time on record, as temperatures there rose above freezing for the third time in less than a decade. The warm air fueled an extreme rain event that dumped 7 billion tons of water on the ice sheet.