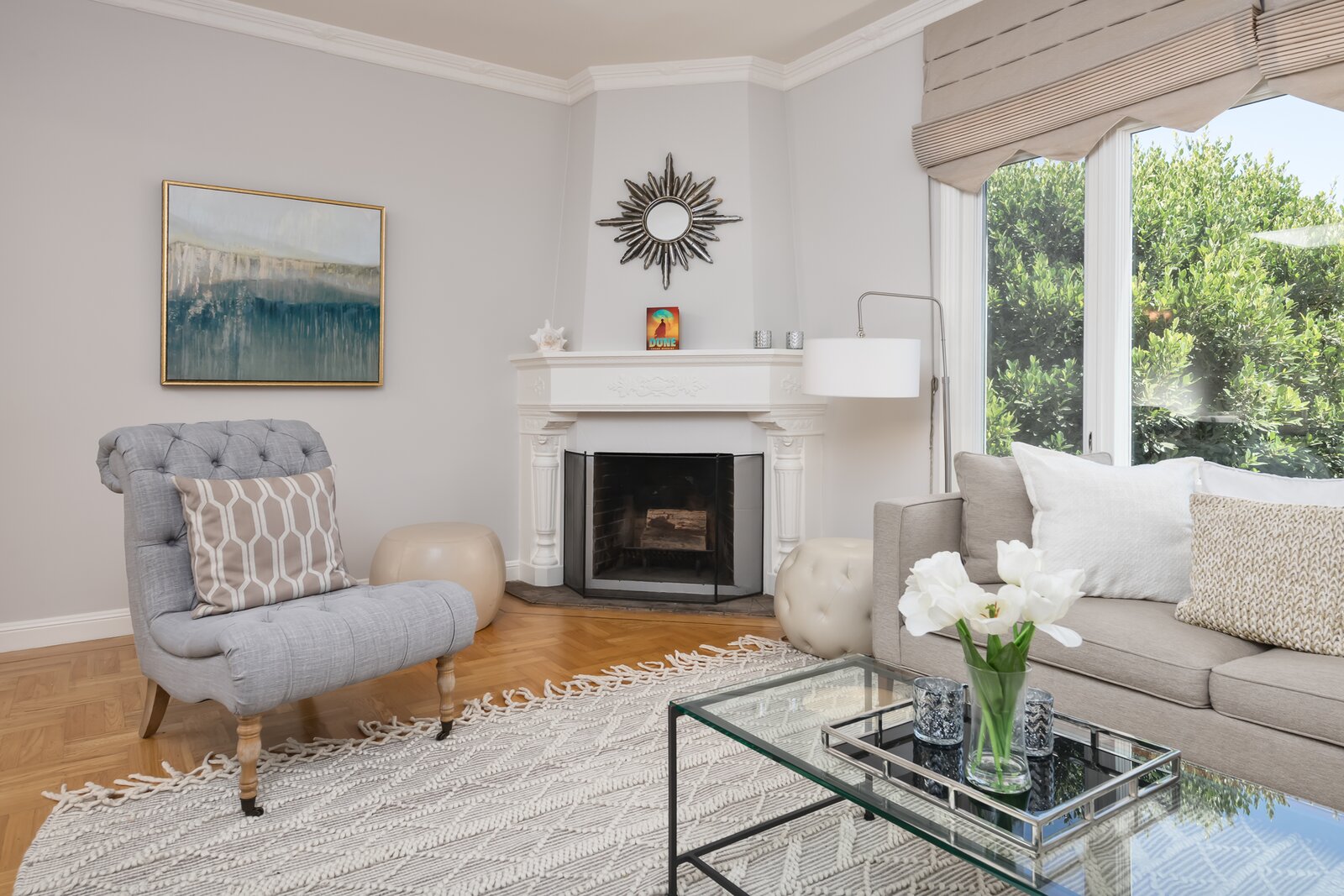 Art Deco and Victorian touches, plus an ample backyard garden, give this Potrero Hill two-bedroom presence as well as pedigree.

On an increasingly inhospitable planet with dwindling natural resources, powerful oligarchs battle for control. That’s not a news headline, but the plot behind Frank Herbert’s classic 1965 sci-fi novel Dune, which is the source material for the Denis Villeneuve film currently topping worldwide box-office charts.

In an exquisitely timed twist, the San Francisco house where Frank wrote the novel is now for sale. But this resource may be dwindling too, for 412 Mississippi Street is now marked as "sale pending." 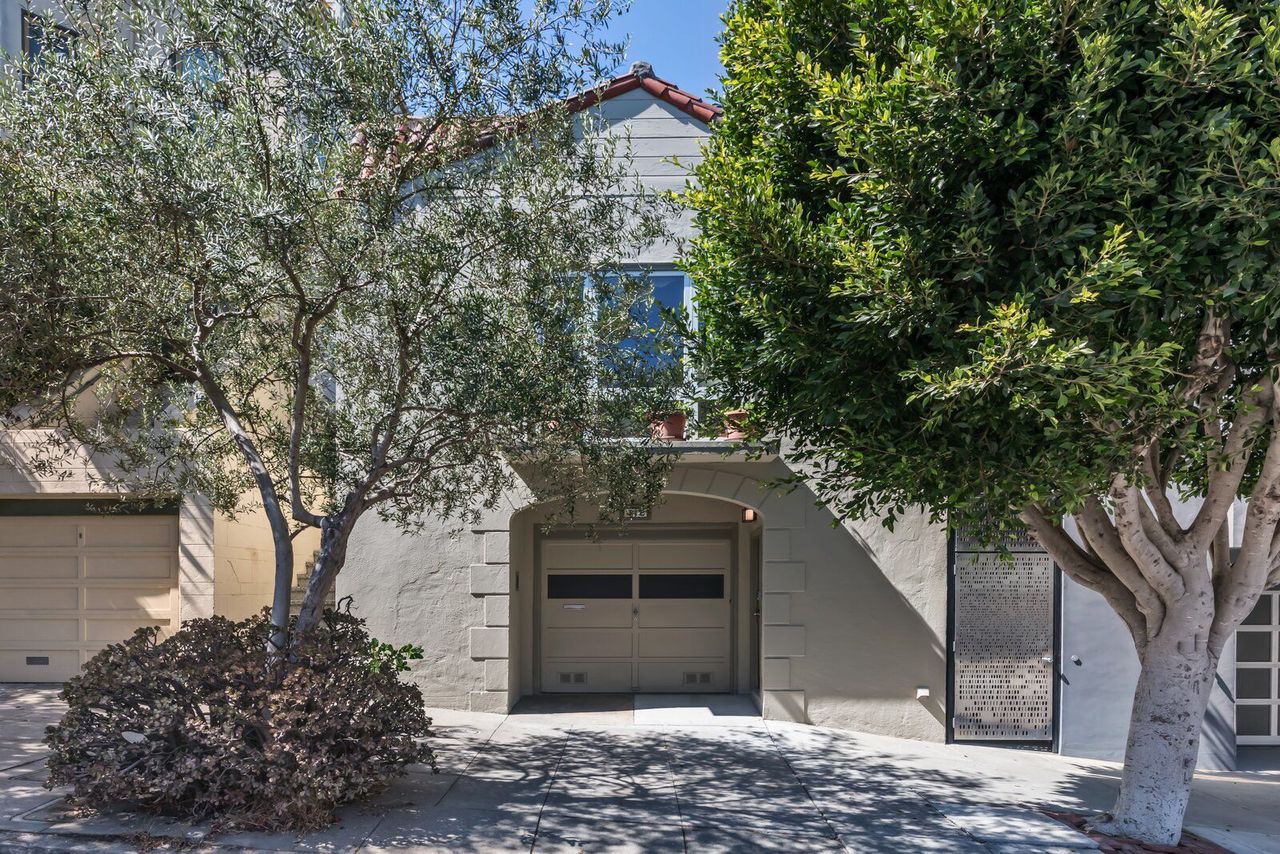 As is common with San Francisco homes, the former Herbert residence sits atop its garage. The roof is topped with traditional Spanish tile, and the interior features Deco and Victorian touches. 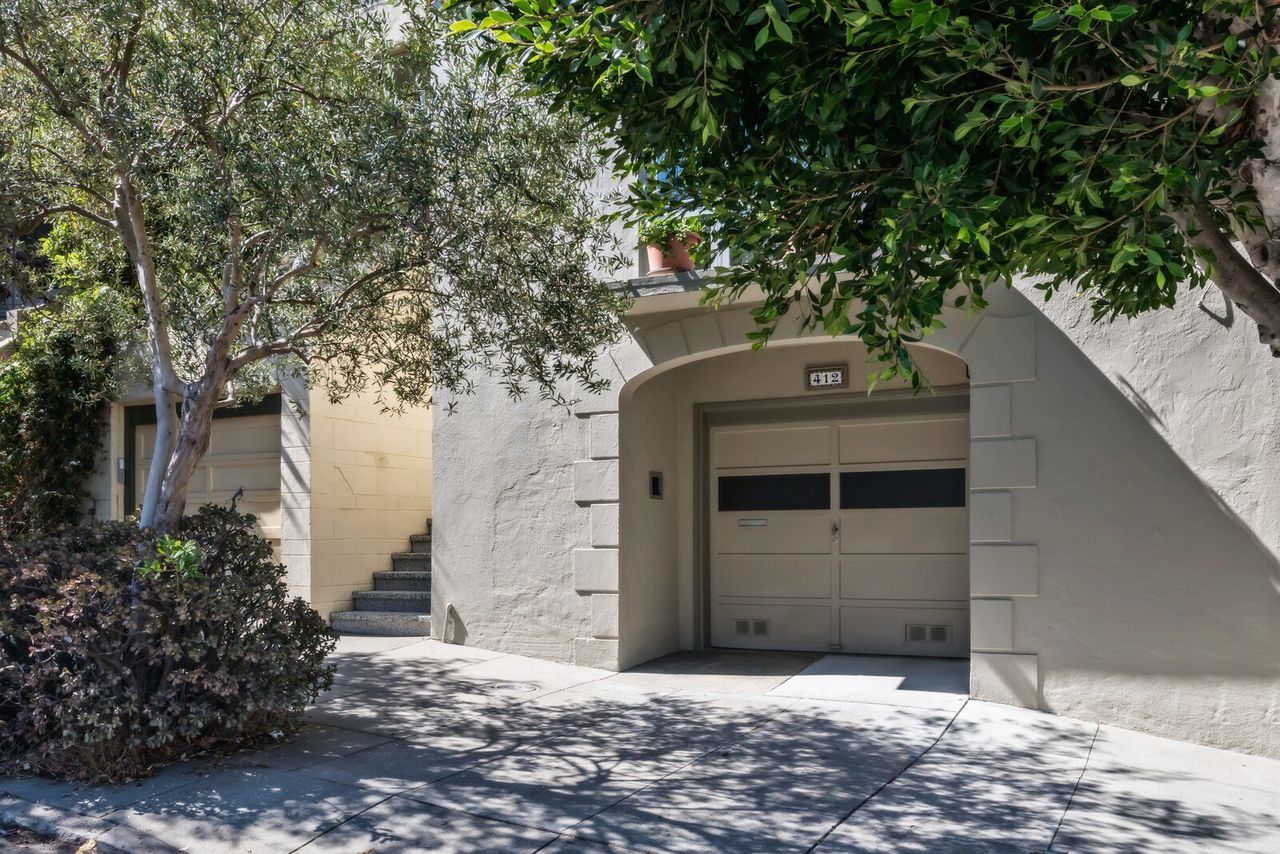 A stairway at the side of the home leads to the entryway.

The property is located on the north slope of Potrero Hill, the neighborhood south of downtown San Francisco known for its sunny weather and views of the bay. It’s a short walk west to the popular Mission District, or an even quicker jaunt east to the Chase Center or Oracle Park to catch a ballgame. 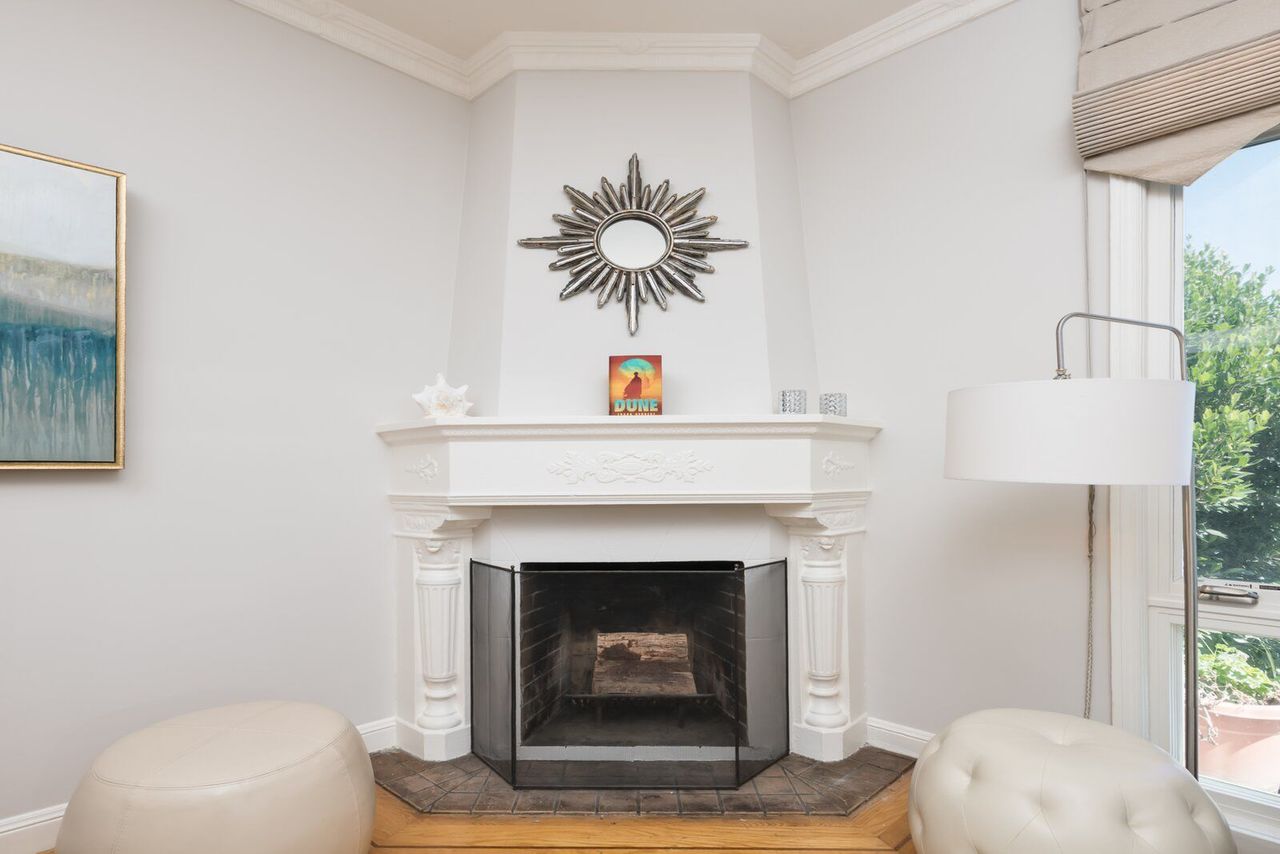 The home’s connection to Frank Herbert has not gone unnoticed. 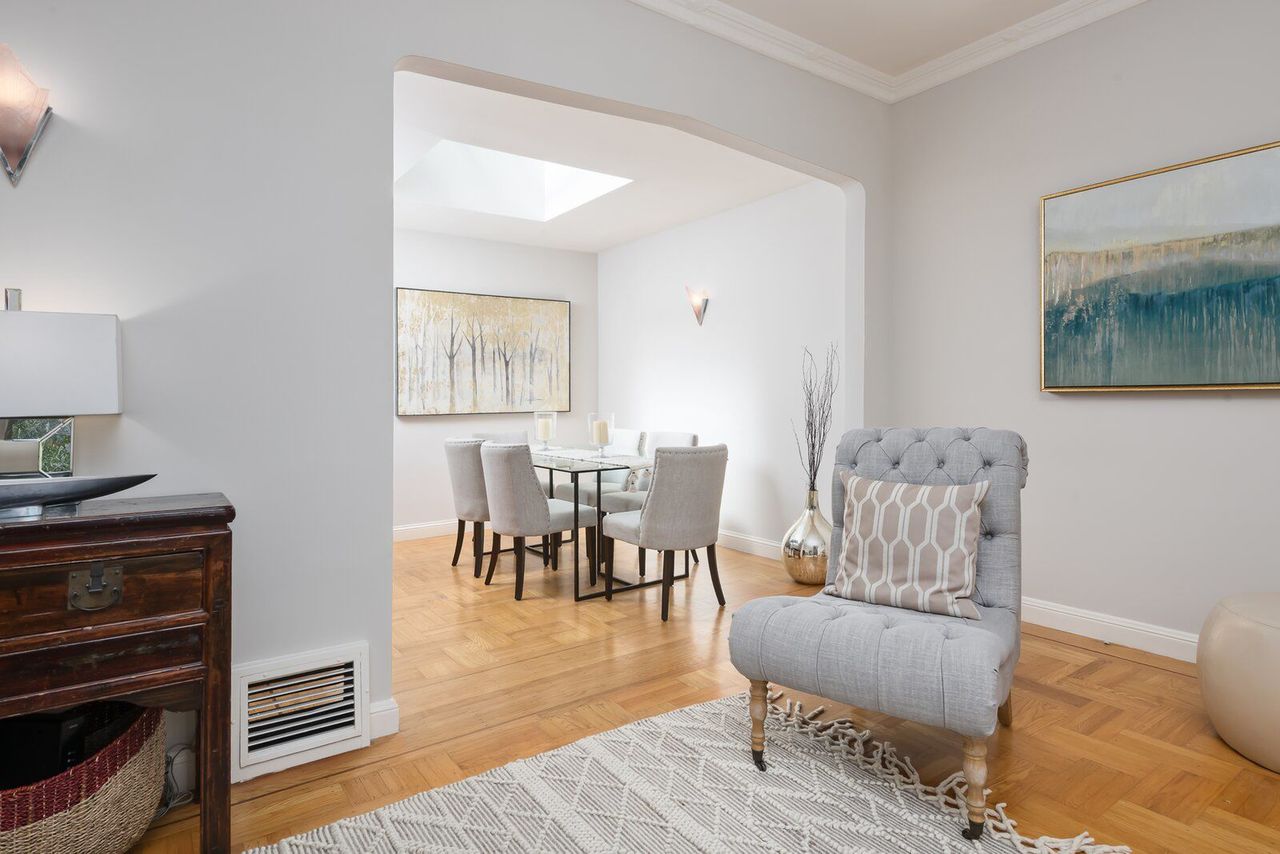 A quartet of skylights in public areas (including the dining room) fill the home with natural light.

This house gave Frank a stable base after many itinerant years. Born in Tacoma, Washington, in 1920, Frank served in World War II as a Navy Seabee and attended the University of Washington before marrying and going to work full-time as a newspaper reporter for publications in Oregon and California. His first sci-fi stories were published in 1952, and his first novel, The Dragon in the Sea, came four years later. 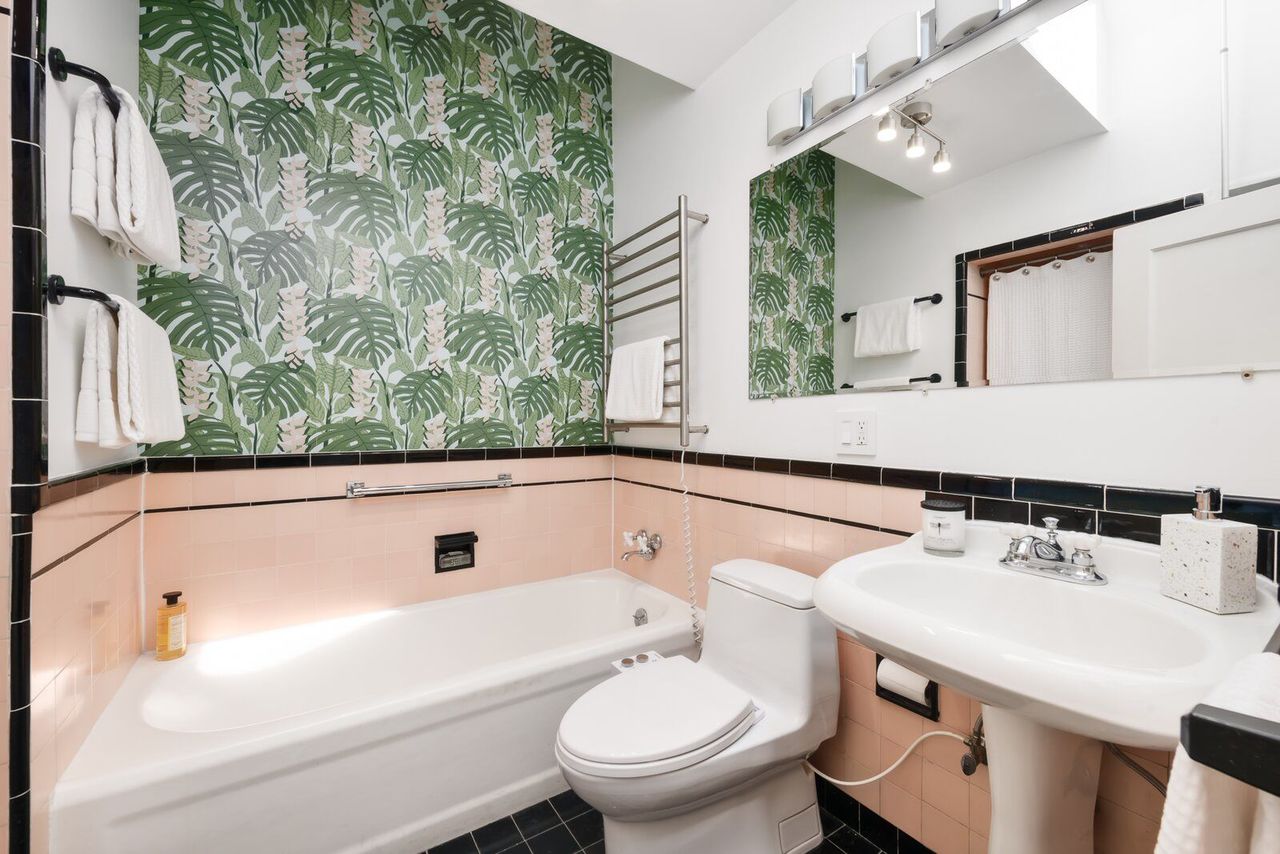 A stylistic touch from Frank Herbert’s days remains: a pink-and-black-tiled bathroom. (The tropical wallpaper is a later addition.) 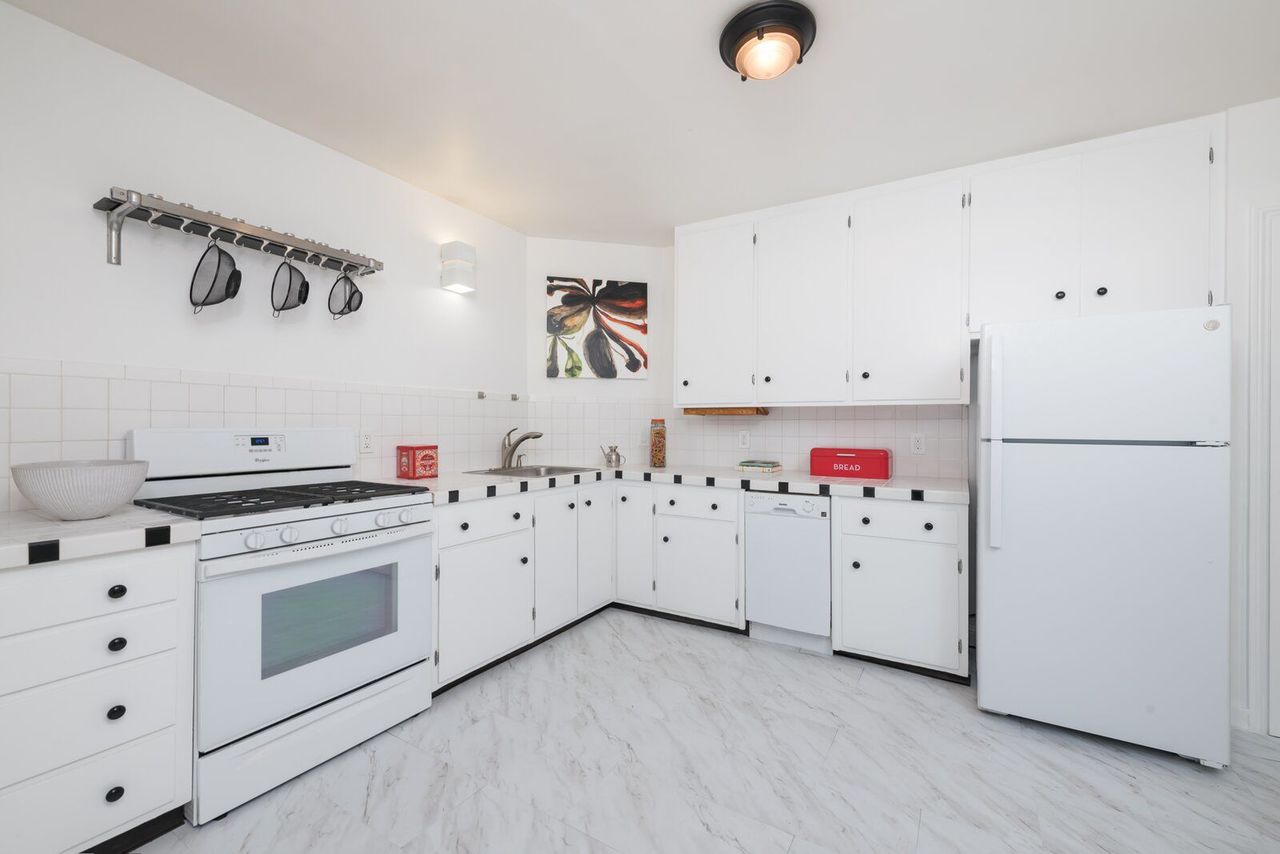 The kitchen has been recently updated in a monochromatic look, but still retains some of its original counter tiles.

Frank began writing Dune in 1959, after working on a long-form article about the Oregon Dunes (near Florence, Oregon,) that was never published. According to a biography by his son, Brian, Dune was written in the mornings at a rolltop desk in the dining room, before Frank headed to work at the San Francisco Examiner as a picture editor on the evening shift. 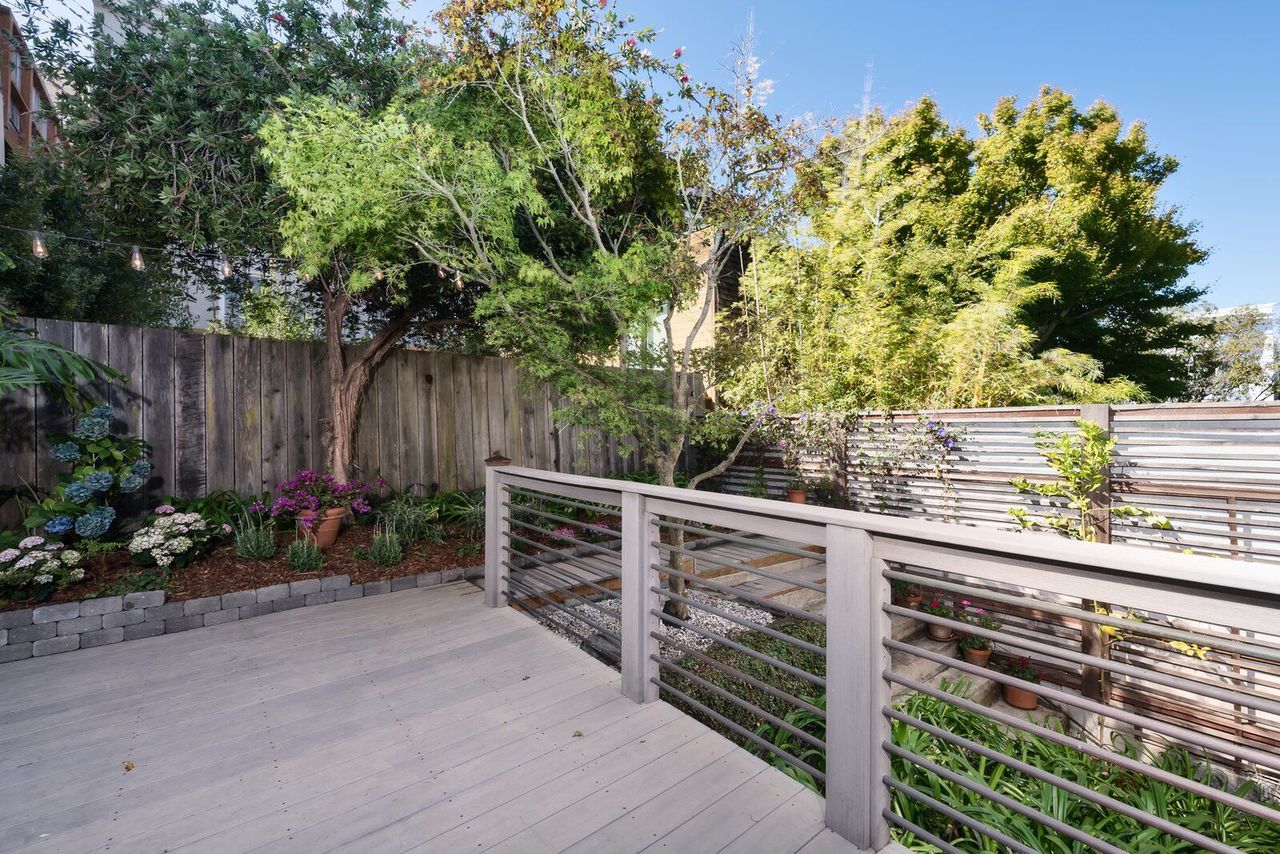 The garden unfolds over two levels on the hillside site. 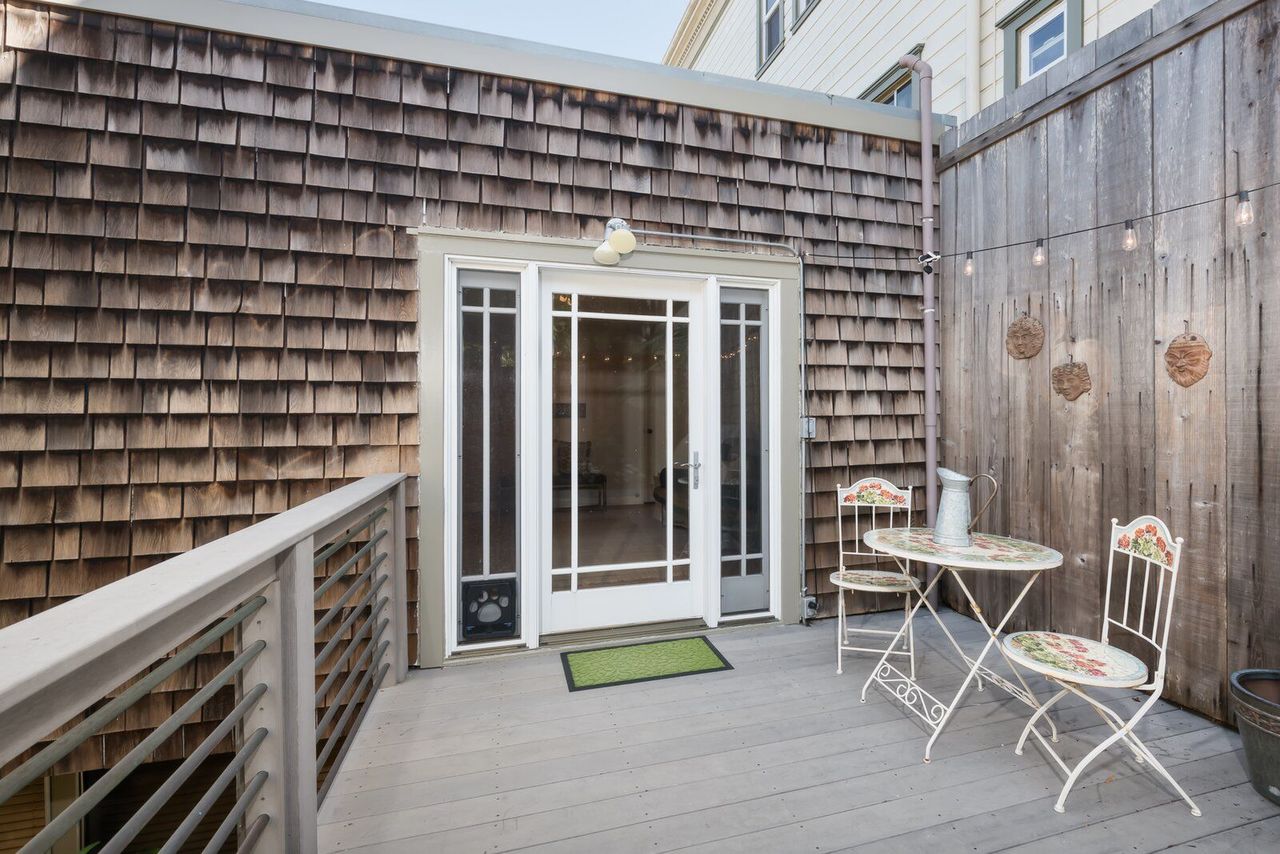 The back of the home, clad in cedar shingles, includes a small deck overlooking the garden.

The two-story Potrero Hill home was built in 1938, and it features a blend of Victorian and Art Deco details inside. A standout is the ornate white fireplace with a vintage sunburst mirror in one corner of the living room. Parquet wood floors extend throughout most of the home. The kitchen has been updated, but it shares hints of color and materiality with the original bathroom (dating back to Frank Herbert’s time), which features a blend of pink and black tile. 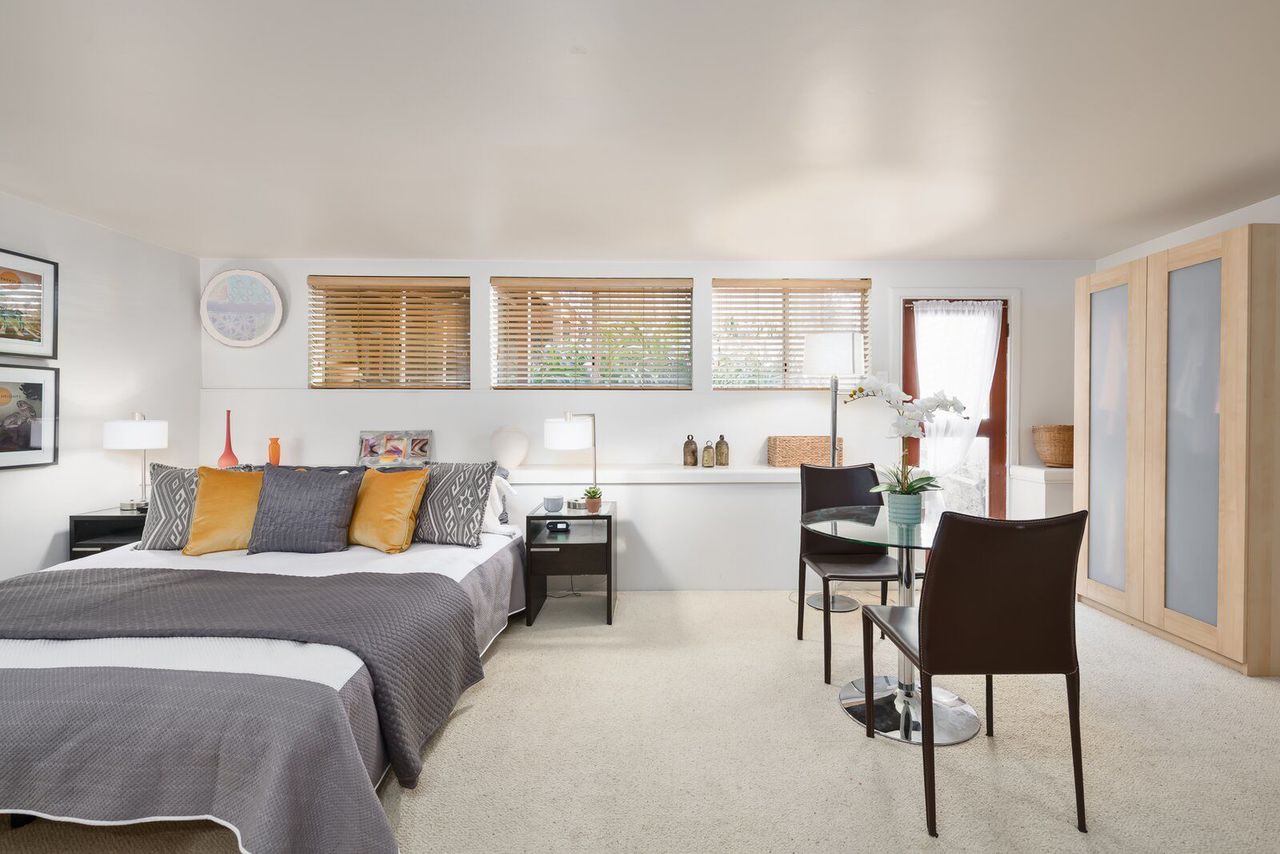 The principal bedroom is large enough to make room for a small seating area. 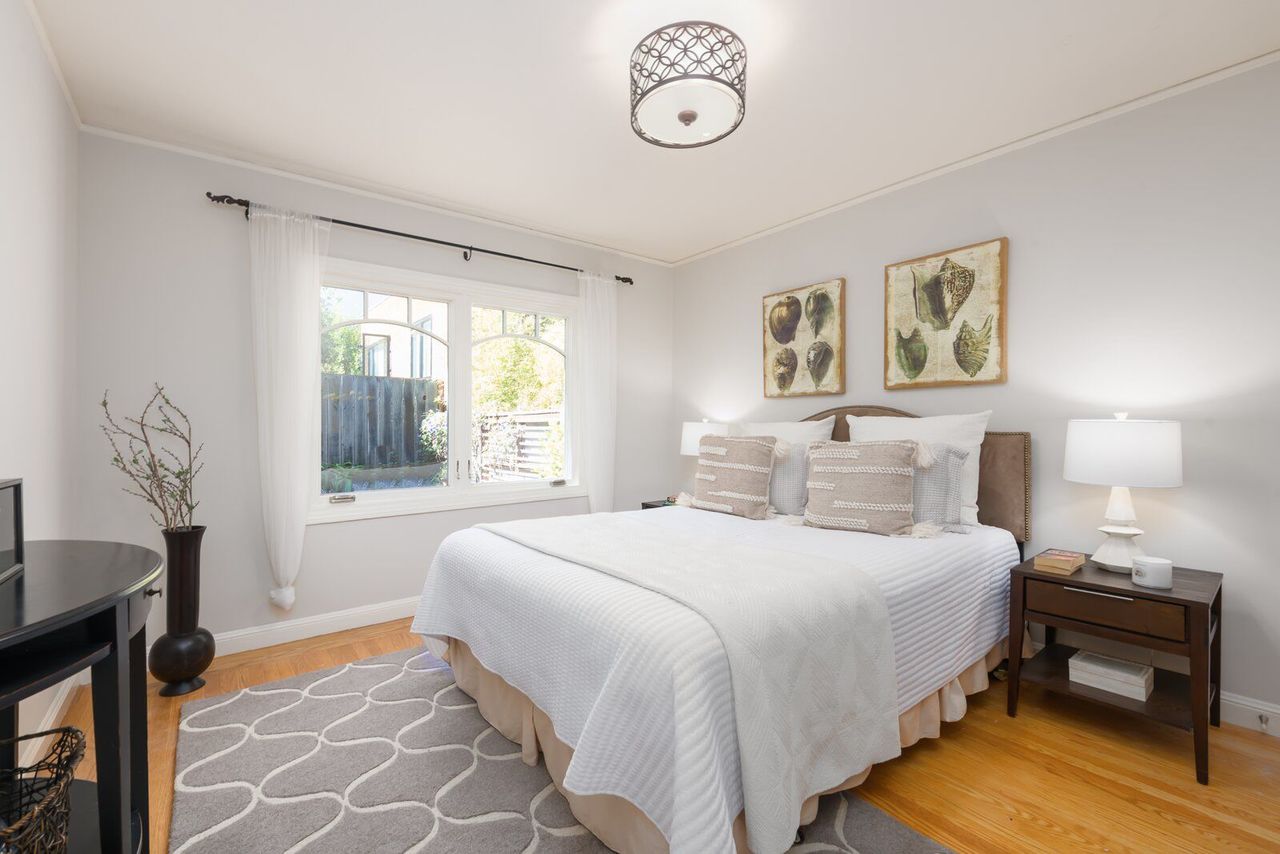 A second bedroom looks out onto the garden.

The building keeps a low profile in front-a side-flight of stairs leads to its tucked-away entrance on the second story. The interior is filled with natural light thanks to skylights in the kitchen, dining room, and hallway. A sizable eat-in kitchen gives way to a private garden in back. The home’s two bedrooms look onto this green space, and one connects directly to a rear deck. 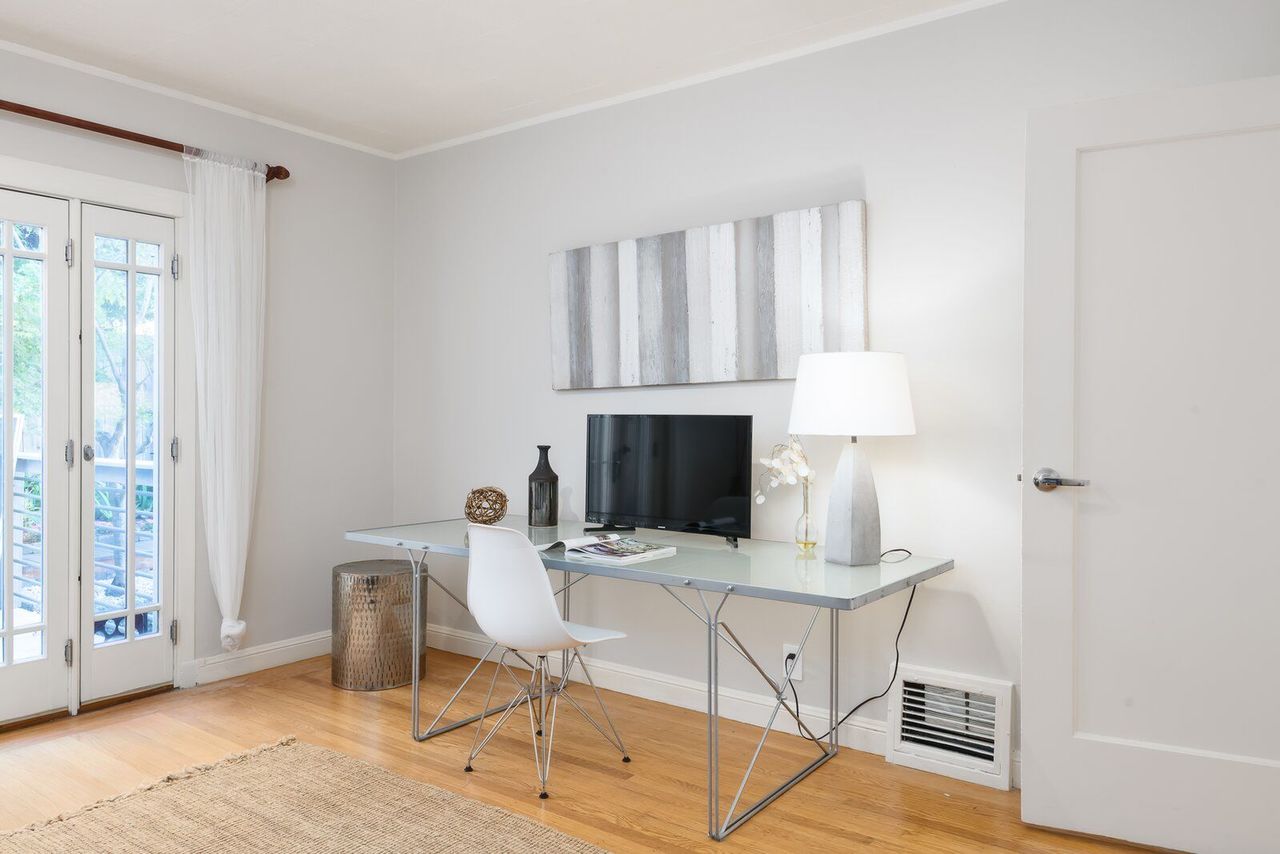 French doors connect the den directly to the back garden.

For many years, the lower level was set up as a small, short-term rental, which comes with the property. It can be returned to the rest of the house as a third bedroom, or serve as its own apartment.

By the time Dune was published in 1965, the couple had moved from this house to Marin County. But while there were many Dune sequels, the original remained Frank Herbert’s sand-covered magnum opus, and thus 412 Mississippi Street is the place where sci-fans continue to make pilgrimages.