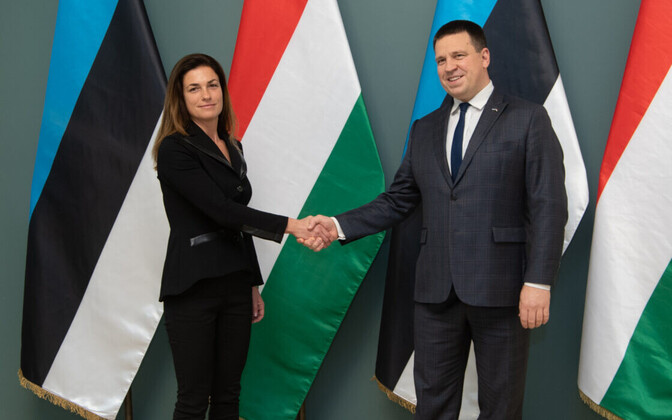 A former Hungarian Honorary Consul in Estonia has hit out at Riigikogu speaker Jüri Ratas' (Center) recent visit to Budapest, saying he failed to address pressing issues, including freedom of speech, in his meetings with his counterpart, as well as with justice minister Judit Varga.

The former consul, Mall Helam, tweeted in English Saturday that: "Speaker Jüri Ratas reported about friendly meetings with Hungarian Minister of Justice Judit Varga. It seems that the use of NSO spyware under the responsibility of minister Varga, as well as restrictions in Hungary on the free press and academic freedoms, were not important enough issues to discuss."

Hellam was honorary consul from 1994 until 2017, resigning over the policies of Viktor Orbán's administration, specifically its pressure in causing a university to relocate to neighboring Austria.

As reported by ERR News, Ratas was on an official visit to Budapest Friday, also meeting with his counterpart, László Kövér, speaker of the Országgyűlés, the Hungarian National Assembly, President of the Hungary-Estonia Friendship Group Attila Tilki and Honorary Consul András Bereczki while there, in addition to his meeting with Vargas.

Conservative People's Party of Estonia (EKRE) MP Anti Poolamets, who is chair of the Estonian-Hungarian parliamentary group, accompanied Ratas at some of the meetings, and a further parliamentary group visit to Hungary is planned for the near future, the Riigikogu press service says.

Full diplomatic relations between the two countries were reestablished in 2018, with embassies opening reciprocally in Budapest and Tallinn.

In February, foreign minister Eva-Maria Liimets, a former ambassador to the Czech Republic, who joined Ratas' party after becoming minister early on this year, criticized what she called Hungary's deviation from principles of democracy, the rule of law, human dignity and diversity, and the free market.

Liimets made her remarks before the Riigikogu, ERR's online news in Estonian reports. Liimets said then that Estonia belongs to a space of values where the principles noted above are adhered to.

Several proceedings have been initiated against Hungary at EU-level, ERR reports, calling into question the ruling party's policies and relationship to the rule of law, while U.S.-based democracy, political freedom, and human rights NGO Freedom House said in a 2020 report that: "Prime Minister Viktor Orbán's government in Hungary has similarly dropped any pretense of respecting democratic institutions."

"After centralizing power, tilting the electoral playing field, taking over much of the media, and harassing critical civil society organizations since 2010, Orbán moved during 2019 to consolidate control over new areas of public life, including education and the arts. The 2020 adoption of an emergency law that allows the government to rule by decree indefinitely has further exposed the undemocratic character of Orbán's regime," the Freedom House report continued.

Judit Varga admitted in summer that covert surveillance tools had been used to wiretap Hungarian citizens' phones, albeit legally.

The Pegasus project, a collaborative investigation run by 17 news outlets and named after the Israeli-made software in question, found that 300 Hungarian phone numbers had been targeted with surveillance attacks, English-language news portal Hungary Today reports.

Pegasus software can hack any Android or iOS smartphone, gaining total access, including to photos, videos, search history, messages, and more can be accessed, as well as the option to record phone calls and make use of a phone's camera and microphone, Hungary Today reports.

That it was the Hungarian government behind the snooping and not some other body is most likely given private corporation NSO Group only provides its product to national governments and government agencies, and then only after being granted permission to do so by Israel's defense ministry. The software is primarily used to fight terrorism, but the Pegasus project revealed instances of its use in targeting journalists, opposition politicians, activists and others.

Malle Hellam resigned as Hungarian honorary consul in Estonian, a role she had held since 1994, in 2017, a year before full diplomatic ties were restored.

She cited pressure from Prime Minister Viktor Orban's government on the George Soros-funded Central European University (CEU), which in 2018 relocated from Budapest to Vienna, Austria, as a major factor in her resignation.

The European Court of Justice ruled last October that the higher education reform initiated by the Hungarian government which forced the CEU to leave the country was contrary to domestic law.

Hellam is now director of the Open Estonia Foundation, founded in 1990 via the support of George Soros. In 2010 Hellam was voted European of the year.

Riigikogu spokesperson: Ratas did speak about rule of law principles while on visit

The Riigikogu's press service told ERR Saturday that the Riigikogu speaker raised the principles of the rule of law at all meetings the meetings he attended during his visit to Hungary.

The press service says that its press releases on the content of a high-level meeting never cover all of the topics under discussion, hence the issue not being mentioned.

"Right now, EU unity is more important to us than ever before," he said. "In order to achieve and maintain this coherence, all member states need to work more closely together."

Ratas would have been referring to the current migratory pressure on the Belarus-Poland and Belarus-Lithuania borders.