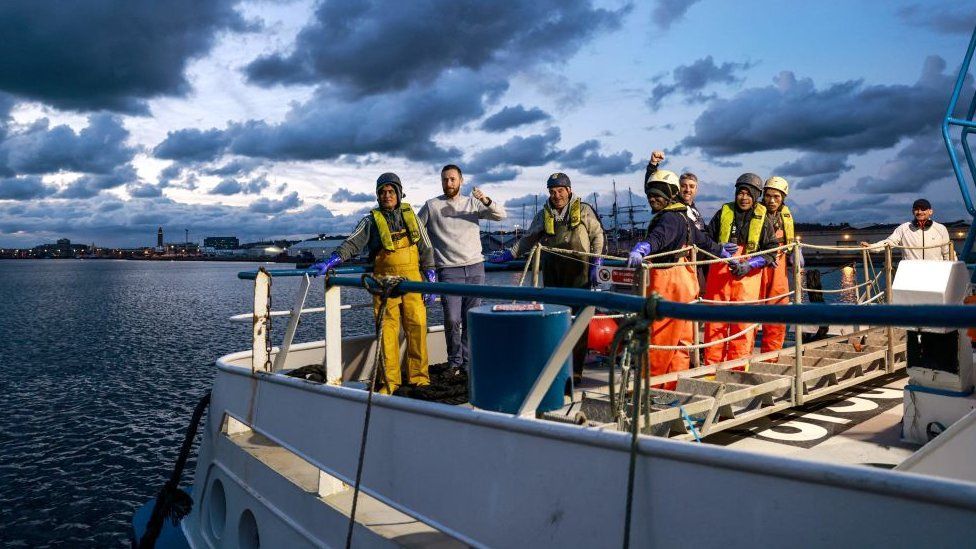 The British trawler that was detained by France during the post-Brexit fishing row has been released by the French authorities.

The trawler's owner, Macduff Shellfish, said it was "delighted" that the crew and vessel could return home.

French authorities held the boat last week, saying it did not have a licence.

Menna Rawlings, the UK's ambassador to France, welcomed the news, tweeting: "Glad to hear the Cornelis is free to leave Le Havre and that the Brits on board are on their way home tonight."

The dispute over post-Brexit fishing licences flared up last month, after the UK and Jersey denied fishing permits to several French boats.

France then threatened a series of measures against the UK unless more licences were granted by 2 November.

But French President Emmanuel Macron suspended the threats at the 11th hour ahead of more talks between UK and French ministers on Thursday.

Earlier, the trawler's skipper Jondy Ward told the BBC they had been "caught in the middle" of the political row.

Mr Ward still faces trial in France next August regardless of Wednesday's court ruling that the boat can be released.

He has been charged with illegal fishing without a licence in French waters - but the case could be dropped before it reaches trial.

Andrew Brown, the public affairs director of Macduff Shellfish, said the crew were in good spirits, looking forward to returning to their loved ones and grateful for all the messages of support.

No bail bond was needed to release the trawler, he said.

What is the fishing row about?

In short, it's about how many French fishing boats can catch fish in UK waters.

Under the Brexit trade deal, the EU and UK agreed they would give licences to boats if they can show they have fished in each other's waters for years.

But there have been disagreements about how much evidence is needed.

But smaller vessels that come from French harbours to fish around the Channel Islands, for example, can find it harder to provide the proof needed.

The prime minister's official spokesman said: "It's entirely up to the French government if they want to reimpose the threats that we saw they both announced and stood back from in recent days."