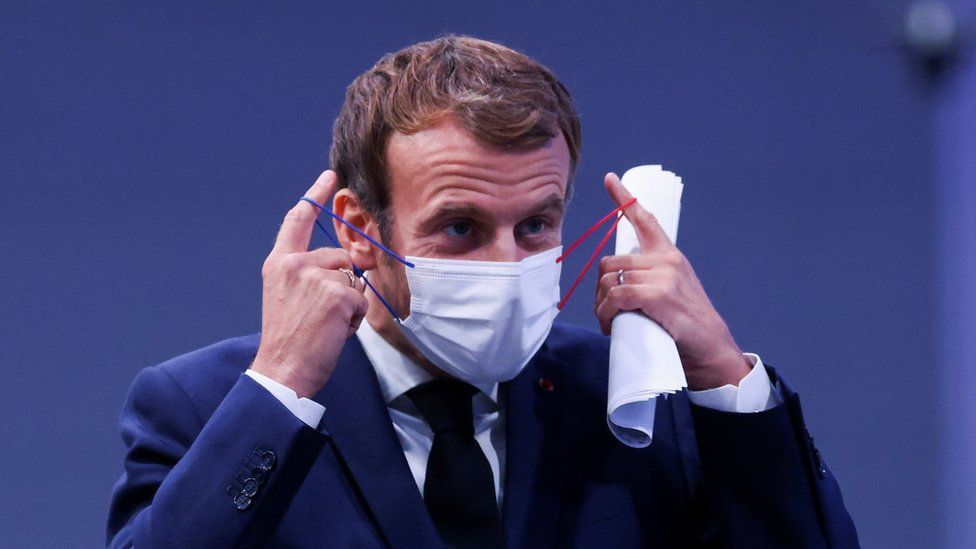 France will delay retaliatory measures against the UK while talks over post-Brexit fishing rights continue, Emmanuel Macron has said.

Paris had threatened to block British fishing boats from its ports from midnight in a row over the licensing of French fishing boats.

But the French president told reporters the sanctions would be put off as talks between officials continue.

The UK said it welcomed the move and would continue "intensive" discussions.

A government spokesman added this would include "considering any new evidence" to support the remaining French licence applications.

The French government said its measures would now not come into effect before this meeting took place.

In a statement, the president's office added it expected the UK to respond to France's latest proposals on licensing by Wednesday.

The row flared up last month, after the UK and Jersey denied permits to dozens of French boats to operate in waters near their coastline.

France had threatened to take a series of measures against the UK unless more licences were granted by midnight on Monday.

Representatives from the EU Commission, France, the UK and the Channel Islands began talks on Monday, seeking to diffuse the row.

French media quoted Mr Macron telling reporters at the COP26 climate summit in Glasgow these would now continue on Tuesday.

"It's not while we're negotiating that we're going to impose sanctions," he was quoted as saying.

"We'll see where we are tomorrow [Tuesday] at the end of the day, to see if things have really changed," he added.

What is the fishing row about?

Under the Brexit trade deal, the EU and UK agreed they would give licences to boats if they can show they have fished in each others' waters for years.

But there have been disagreements about how much evidence is needed, leading to anger from France when applications were denied by the UK and Jersey.

Smaller vessels that come from French harbours to fish around the Channel Islands, for example, would find it harder to provide this kind of proof.

The retaliatory measures threatened by France include preventing British fishing boats from disembarking at its ports, and stepping up border checks on UK goods.

Officials in Paris have also threatened to tighten security checks on British boats, and increase checks on trucks going to and from the UK.

She rejected a French accusation that the UK had breached the Brexit trade deal over the way it had issued licences.

And she had warned the UK would be prepared to take legal action under the deal, unless France withdrew its threats.