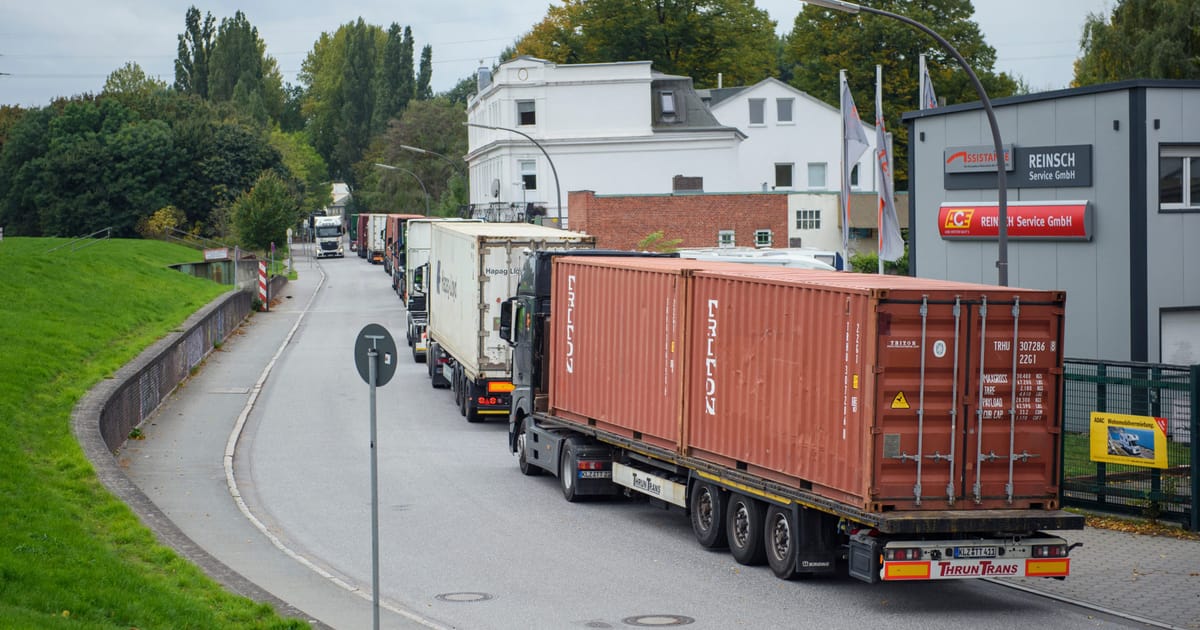 Europe racks up record trade deficit. Can it bounce back?

It’s not just Europe’s energy balance that has plunged into the red. Its manufacturing trade surplus has nearly halved.

Europe, the world's largest economic bloc, enjoyed stable trade surpluses for a decade but the war in Ukraine and the ensuing energy crisis have tipped the Continent into a spiraling external deficit unseen since the launch of the euro.

The terms-of-trade shock maxed out in August, the latest month for which trade figures are available. And, even though energy prices have since eased, European leaders are still scrambling to shore up supplies of affordable oil and gas to replace lost Russian deliveries. A harsh winter looms.

A breakdown of the trade figures shows that the EU's manufacturing trade surplus has nearly halved this year.

Can Europe bounce back? Or will its industrial base become hollowed out as industry moves offshore? And will the eurozone, and the EU more broadly, end up being saddled with the chronic external deficits that have long plagued the United States and, more recently, destabilized Britain? POLITICO breaks it down for you:

The eurozone’s negative trade balance with the rest of the world in August stood at €50.9 billion, the highest deficit ever recorded, compared to a €2.8 billion surplus a year ago, according to the latest Eurostat numbers.

The trade deficit for the EU as a whole spiraled to €64.7 billion.

The eurozone’s current account balance — the balance of all trade in goods and services as well as international transfers of capital, such as remittances — hit a €26.32 billion deficit in August, largely driven by the trade deficit in goods, the European Central Bank reported.

Is that a bad thing?

A trade deficit occurs when a country or trading bloc’s imports exceed its exports. A trade surplus is the opposite. Trade deficits are not per se good or bad, although many countries seek a trade surplus, including by setting up tariffs and quotas to artificially boost their trade balance, a practice known as mercantilism.

The trade deficit is largely driven by high energy prices, which in August hit a record €350 per megawatt hour. Prices have come down from their peak, trading at around €150/MWh, but they are still a multiple of where they were a year ago.

“Markets have gone from pricing this energy crisis as being temporary, they are now pricing it to be a much longer-term story, albeit not as elevated as it was in August,” said Kristoffer Kjær Lomholt, chief FX analyst at Danske Bank.

“We think that it is a kind of a more long-term thing that is going to weigh on the currencies of economies that are energy importers, where the eurozone, of course, stands out to a very large extent,” he added.

Others believe that the shift, being largely energy related, could resolve itself over time, said Sam Lowe, who covers trade policy at Flint Global.

An EU official also pointed to EU-Russia trade. “The peak in energy prices has made the value of our imports from Russia increase substantially (while the volume of those imports from Russia decreased), and our exports have spiralled down because of sanctions (export controls),” the official said.

Will the EU be less competitive if energy prices remain high?

A negative trade balance and consequently a weaker currency makes imports more expensive. “Net importers will have to pay more for goods and services,” said Lomholt.

On the other hand, a weaker euro could fuel exports, said Matthias Krämer, head of external economic policy at German industry federation BDI. “If the euro currency was a little bit weaker, it could also make Europe’s position on global markets better by making exports cheaper,” he said.

But there’s another way of looking at this. Lowe argued the sustained large eurozone trade surplus was itself problematic, in that it was a function of intra-EU demand being lower than it should be. “Being overly dependent on external demand also leaves the EU quite vulnerable to both external shocks, and political coercion.”

What does that mean for the euro?

“We expect the euro to decline further in coming months as part of this adjustment,” said Robin Brooks, chief economist at the Institute of International Finance.

A negative trade balance or current account deficit puts downward pressure on the value of free-floating currencies, which move with demand of goods: less demand for a country’s exports means less demand for its currency, which in turn lowers its value relative to others. Conversely, strong foreign demand for goods strengthens a country’s currency.

“Foreign investors need to be compensated via a real depreciation of the exchange rate, and generally higher real interest rates,” said Lomholt at Danske Bank.

The Danish lender has recently downgraded its forecast for the € to $ exchange rate to $0.93 in 12 months from virtual parity now, driven in part by the energy price shock. “We have for some time been arguing that €/$ looked overvalued and not undervalued … And just given the additional push to the energy crisis that we got during summer, we saw a case that the euro/dollar [exchange rate] should actually hit even lower,” he said.

Is business freaking out?

“The data are not so surprising considering the high energy prices, but they are worrying”, said Luisa Santos, responsible for international relations at BusinessEurope. She called on the EU to try to bring energy prices down and to boost exports by opening new market opportunities via more trade agreements.

Germany, the bloc’s export powerhouse, increased its exports by 14 percent in the first eight months of the year but imports have surged by more than 27 percent, according to national trade figures.

“We’re not performing in a segment which is highly influenced by a cost driven competition,” said Krämer at the German industry federation. “But if this situation will last longer of course some parts of our industry will be more and more under pressure.”