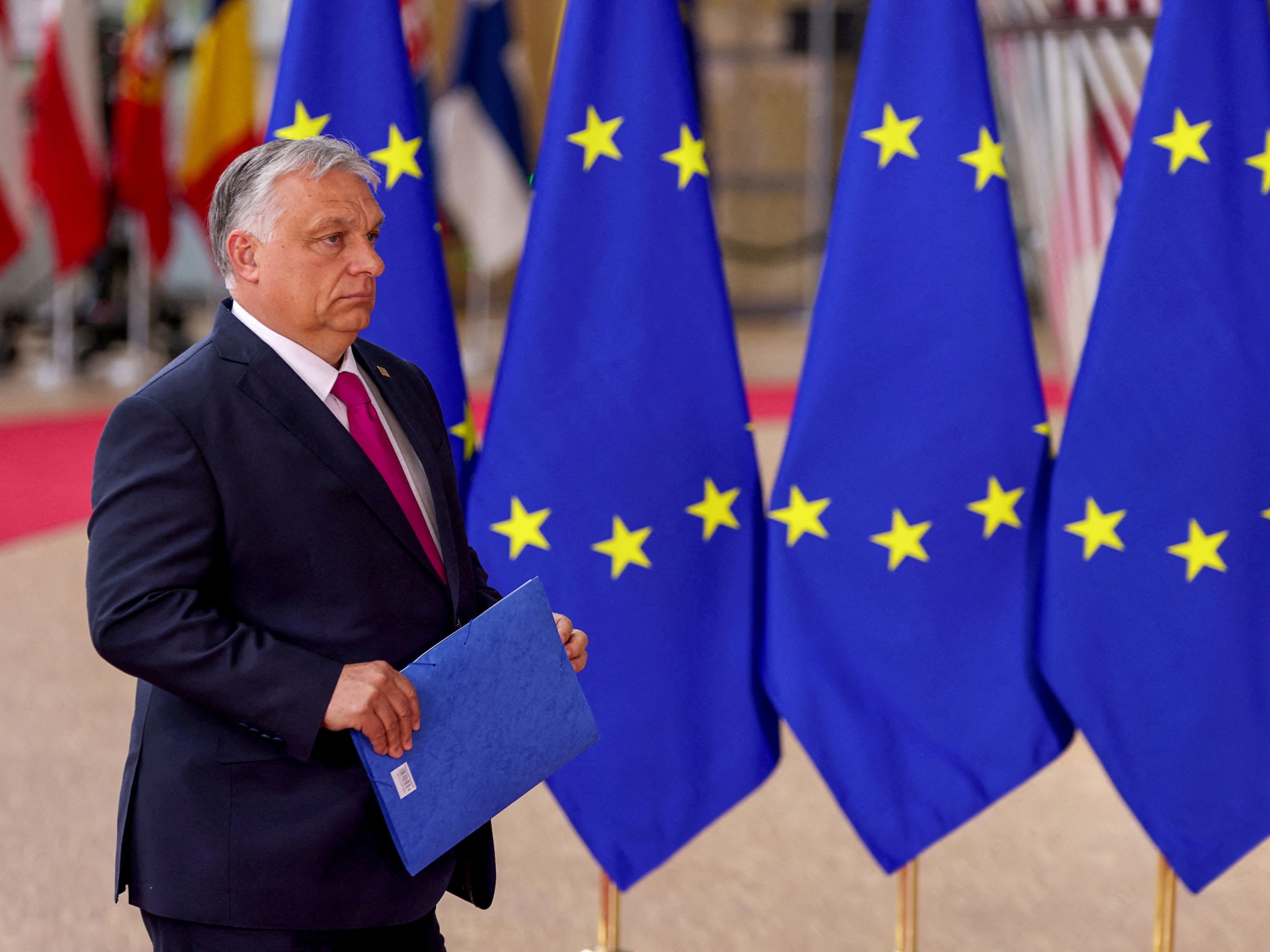 EU moves to cut $7.5bn funding for Hungary over corruption

The 27-nation EU bloc has three months to decide on the suspension of funding for Hungary over charges of damaging democracy.

The European Union executive recommended suspending some 7.5 billion euros ($751bn) in funding for Hungary over corruption, the first such case in the 27-nation bloc under a new sanction meant to better protect the rule of law.

Relations between the EU and Hungary have been on thin ice for months as Brussels suspects that nationalist Prime Minister Viktor Orban’s government is undercutting the rule of law and using EU money to enrich its cronies.

Two years ago, the EU introduced new financial sanctions in response to what it says amounts to the undermining of democracy in Poland and Hungary.

During more than a decade in power, Orban subdued courts, media, NGOs and academia, as well as restricting the rights of migrants, the LGBTQ+ community and women.

“It’s about breaches of the rule of law compromising the use and management of EU funds,” said EU Budget Commissioner Johannes Hahn. “We cannot conclude that the EU budget is sufficiently protected.”

He highlighted systemic irregularities in Hungary’s public procurement laws, insufficient safeguards against conflicts of interest, weaknesses in effective prosecution and shortcomings in other anti-graft measures.

Hahn said the Commission was recommending the suspension of about a third of cohesion funds envisaged for Hungary from the bloc’s shared budget for 2021-27 worth a total of 1.1 trillion euros ($1.1 trillion).

The 7.5 billion euros ($7.5bn). in question amounts to 5 percent of the country’s estimated 2022 gross domestic product (GDP). EU countries now have up to three months to decide on the proposal.

Hahn said Hungary’s latest promise to address EU criticisms was a significant step in the right direction, but must still be translated into new laws and practical actions before the bloc would be reassured.

On Saturday, Hungary’s government said that MPs would vote next week on a series of laws aimed at easing the conflict. The measures are expected to include setting up independent anti-corruption watchdogs to monitor the use of EU funds as well as steps to make the legislative process more transparent.

Hahn said he was “very confident that … we will see significant reforms in Hungary, which indeed will be a game-changer.”

He said Hungary has committed to “fully inform” the commission about implementing measures to address their concerns by November 19.

Hungary’s Development Minister Tibor Navracsics, in charge of negotiations with the EU, said Hungary would meet all 17 of its commitments made to the European Commission to stave off the loss of any EU funding.

“Hungary did not make commitments to befuddle the Commission,” Navracsics told a news conference. “We have made commitments that we know can be implemented … therefore, we will not be facing a loss of funds.”

PM Orban, who calls himself a “freedom fighter” against the world view of the liberal West, denies that Hungary – an ex-communist country of some 10 million people – is any more corrupt than others in the EU.

On Thursday, the European Parliament declared that Hungary is no longer a “full democracy” and that the EU needs to act after a vote of 433 in favour and 123 against the resolution. Hungary reacted furiously to the vote and said it is an “insult against a Hungarian person”.