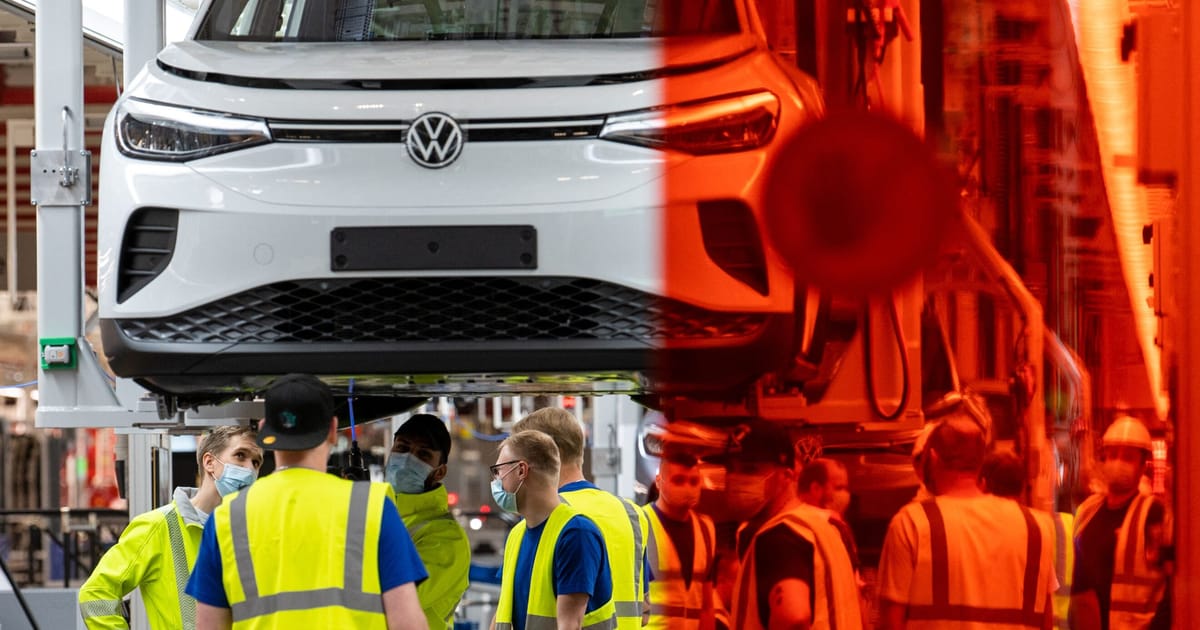 France is leading calls for more funding for industry to compete with China and the US, but it’s not going to get its way without a struggle.

At a European Council summit in Brussels on Thursday, they are in for a fight over how to make that happen.

Throwing money at the problem in a bid to redress the balance with China and America Inc. is an increasingly likely option. Just a contentious one.

France is the main cheerleader in arguing that it's time to shift to a more centralized European industrial policy, and is stressing it's now a race against the clock. Major provisions of America's Inflation Reduction Act, which grants $369 billion worth of subsidies and tax breaks to U.S. green businesses like electric vehicles, kick in on January 1. Paris fears that Europe will be left in the dust if it doesn't bring some of its own financial firepower to the table.

But more free-trading nations like the Nordics are long-time skeptics about subsidies and state-led industrial strategies. They fear government-selected corporate champions are a recipe for over-expensive and inefficient behemoths.

"There is no secret that we are among the very many countries that are very much pro-trade, pro-markets," Swedish Prime Minister Ulf Kristersson said on Wednesday.

Critically, the conversation among EU leaders is likely to focus on how to craft subsidy packages without allowing the EU's hallowed single market to become unfairly distorted. Small countries fear that a shift to state largesse will simply play to the advantage of bigger nations such as France and Germany that will be able to prop up their companies artificially to the detriment of rivals from poorer nations in the bloc.

Beyond the common market, a subsidy race could also go global, shattering attempts to forge global trade rules and reverting back to the law of the jungle. Some fear France is firing the starting gun on this kind of subsidy race to the bottom. “If we start to do this together with the U.S., third countries and big economies will also join in and we will all be worse off,” a senior EU diplomat said.

This debate cuts to the heart of the European Union as an economic single market: When faced with a major economic blow, how much solidarity is there really between EU countries?

Plans on the table

But a wide range of EU countries don’t want the matter to be left at that. If carte blanche is given for countries to spend their way out of trouble, that will simply mean that Germany will pull out the big fiscal guns again. Good luck if you are a Greek or Portuguese rival to a German company enjoying a free ride from Berlin's war chest.

A first step is greater firepower for REPowerEU, the plan to wean the bloc off its dependency on Russian gas. Von der Leyen also flagged tapping money from the Emissions Trading System (ETS) — the EU's carbon allowance scheme — but one EU diplomat warned that the “ETS is turning out to be like an ATM for the Commission.”

A second, more controversial step is an upcoming proposal from von der Leyen for a European Sovereignty Fund, which was first mentioned in her State of the Union address to the European Parliament in September.

“This will be the most contentious point of the discussion,” one EU official said, especially as it reminds of the debate that led up to the establishment of the COVID recovery fund, which was ultimately financed through joint borrowing.

Eight to 10 countries have a problem with new EU money, three EU officials said — mostly the countries who already have comfortable fiscal space, known as the “frugals.” They first want to look at the existing funds.

"We still have quite a lot of undistributed funds that have been mobilized," German Chancellor Olaf Scholz said on Wednesday.

Some EU countries also want a deeper analysis from the European Commission first on “which companies within those sectors are really feeling the burden,” according to the senior EU diplomat mentioned above.

Don’t hold your breath for any quick solutions just yet.

A wide range of diplomats expressed disquiet over the late initiative on the state aid proposals and the European Sovereignty Fund from von der Leyen, which didn’t leave enough time for the EU’s finance ministries and others in national capitals to get their feedback for leaders ready.

In a sense, EU countries have already agreed to disagree beforehand. EU officials and diplomats on Wednesday managed expectations, saying that Thursday is “orientation time,” according to one senior EU official.

One diplomat quoted the French poet Nicolas Boileau, saying that “from the clash of ideas comes the light.” In an ideal scenario, leaders would on Thursday give the European Commission clear political guidelines on the next steps, for example on the Sovereignty Fund, which von der Leyen promised for the summer.

But another diplomat warned that all of these proposals will be hard fought over, “especially if the funds are mainly going to the Germans and the French,” the EU’s two biggest economies.

Three of the diplomats didn’t rule out the idea that the discussion could be kicked down the road to a potential extra European Council in February, although that meeting could also be centered on migration. Another said the topic could be dealt with at a regular meeting in March.