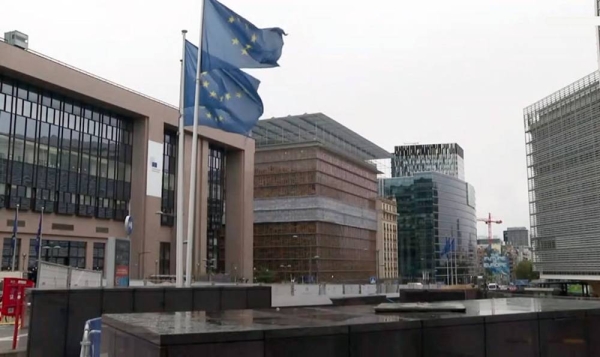 EU leaders have asked Poland to abide by the same rules and legal principles as any of the other members of the European Union do.
The public rebukes, made in the lead-up to a European summit in Brussels, follow an extraordinary ruling by the Polish Constitutional Court earlier this month that openly defied the primacy of EU law, one of the bloc's cornerstone and long-standing principles.

"I do believe Poland has gone too far," said Irish Prime Minister Micheál Martin ahead of the meeting.

"The Polish judicial decision is very far-reaching and doesn’t compare in any shape or form with any previous decisions by national courts, either in breadth or in content. So assertions by the Polish Prime Minister that it’s just another [verdict] in a series of pieces, it doesn’t stack up."

The Taoiseach added the verdict was a "slap in the face" to those member states who are net contributors of the bloc's multi-million budget. All EU countries contribute to the budget, but, in order to redistribute wealth, some give more than what they get, while others get more than what they give.

Poland is the biggest recipient of EU funds, having received more than €18 billion in 2020. Martin also said that the Irish people expect other EU countries to adhere to the bloc's common rules, which "we've all signed up to".

His words were echoed by the leaders of the Benelux (Belgium, the Netherlands and Luxembourg), who all hail from liberal parties and are often the most vocal against instances of democratic backsliding.

The Benelux successfully managed to include a discussion on rule of law in October's European summit, whose original agenda didn't include any item of that sort and was mostly focused on Europe's energy crisis, migration and foreign affairs.

"If we accept that, in fact, Europe is a national interpretation of my personal wishes, that's not the goal. And we accepted to be member states, and we have rules, so we have to respect them," said Luxembourg's Prime Minister Xavier Bettel.

Bettel referred to previous judgments by the EU's Court of Justice (ECJ), whose competence Poland disputes, that found serious deficiencies in the independence of the Polish judiciary.

In recent months, the ECJ has asked Warsaw to dismantle a controversial disciplinary chamber set up by the government to punish judges according to the content of their ruling.

The European Court of Human Rights, a non-EU body, has said that at least one member of the Polish Constitutional Court was unlawfully appointed.

"There’s a decision that the justice system in Poland is not independent, so to get lessons from there is a bit tricky," Bettel said.

Dutch Prime Minister Mark Rutte said that as long concerns remain over the independence of Poland's judicial system, the EU should not greenlight the €36-billion recovery plan that Warsaw has requested as part of the bloc's €750-billion coronavirus fund.

The Commission has been assessing the plan for the last few months and has repeatedly extended the deadline to publish its assessment.

"We have to be tough but the question is how to get there. My argument would be that the independence of the Polish judiciary is the key issue that we have to discuss and we have to settle," he said, asking his fellow member of the European Council to step up their work.

"This has to do with the foundations of our democracies in this part of the world, so we cannot negotiate."

Alexander De Croo, the Belgian prime minister, regretted the current state of affairs and asked for dialogue to resolve the situation.

"It’s unfortunate that we need to have this discussion because this takes away a lot of bandwidth. We could be spending that time on a discussion about energy prices or the future of the European economy," De Croo told Euronews.

Earlier this week, the European Commission President Ursula von der Leyen, who is also a member of the European Council, vowed to use her executive powers to uphold EU values.

"This ruling calls into question the foundations of the European Union. It is a direct challenge to the unity of the European legal order. Only a common legal order provides equal rights, legal certainty, mutual trust between member states and therefore common policies," she told MEPs in Strasbourg.

"We are ready for dialogue," he said, according to a translation by the Associated Press. "We will of course talk about how to resolve the current disputes in agreement and in dialogue."

Hungary's leader Viktor Orbán came to his defense and openly recognized that Budapest and Warsaw had made an alliance to defend what they see as the unlawful expansion of EU powers.

"Poland [is] the best country in Europe. There is no need to have any sanctions. It's ridiculous," said Orbán, referring to a new conditionality mechanism that can freeze EU funds for countries suspected of breaching EU law.

The Commission is considering triggering the never-used scheme, although its bureaucratic process could be complex and take up to nine months to complete.

"The primacy of the EU law is not in the treaty at all. So the EU has primacy over where it has competences," he said.

"What's going on here is that, regularly, European institutions circumvent the rights of national parliaments and governments and modify the treaties without having any legitimate authority to do so. So the Polish are right."

Despite being one of the union's essential principles, primacy of EU law is not enshrined in any article of the treaties, besides a brief declaration annexed to the texts.

The principle predates the current treaties and dates back to 1964 case Costa v ENEL, when the EU's Court of Justice ruled that, whenever there is a conflict between national law and EU law, the bloc's legislation must prevail. Otherwise, common policies would be unworkable, the tribunal noted.

Over time, the principle evolved and became a consolidated part of the ECJ's jurisprudence, which candidate countries must accept in its totality before joining the European Union.

Primacy only applies in cases where national states have ceded competences to the institutions.

In its majority ruling, the Polish Constitutional Court directly challenged the legal doctrine by rejecting two key articles of the EU treaties: Article 1, which establishes the conferral of competences, and Article 19, which sets up the ECJ's powers.

It is still unclear what sort of ramifications the unprecedented verdict will have in practice for Polish citizens and for the country's judicial cooperation with other member states.

EU leaders hope a solution can be achieved through political dialogue rather than financial pressure, as the European Parliament is demanding. Given the magnitude of the verdict, Warsaw would have to make considerable concessions to appease Brussels.

"We are firm on the principles of rule of law. We think that we have tools, legal tools, institutional tools that we should use," said European Council President Charles Michel before entering the summit.

"But we think also that we must be committed to the dialogue in order to be able to deliver."
#Coronavirus
Add Comment