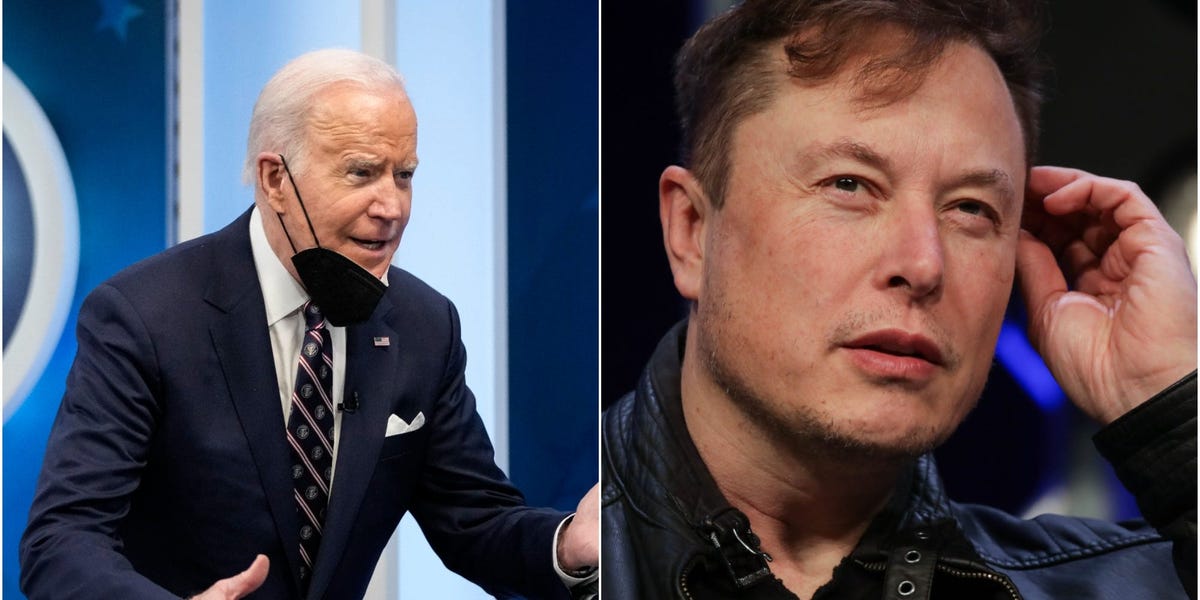 Elon Musk says Joe Biden is too old for a second term: 'How in touch with the people are you? Is it even possible to be?'

Elon Musk thinks 79-year-old President Joe Biden is too old to run for a second term in office.
"You don't want to be too far from the average age of the population because it's going to be very difficult to stay in touch," Musk told Roula Khalaf of the Financial Times.

"Maybe one generation away from the average age is OK, but two generations?" he added. "At the point where you've got great-grandchildren, I don't know, how in touch with the people are you? Is it even possible to be?"

Musk, who said he voted for Biden in 2020 and has voted for Democrats in the past, has become critical of the president as their relationship deteriorated since Biden was elected. Musk said he plans to vote Republican in the next election. Biden will be close to 82 if he gets elected again in 2024. The White House did not immediately respond to Insider's request for comment on Musk's remarks.

This is not the first time Musk has called out a politician's age. In response to a tweet from Senator Bernie Sanders in 2021 demanding "the extremely wealthy pay their fair share," Musk replied with, "I keep forgetting that you're still alive."

Biden's Build Back Better agenda from December 2021 did not find a fan in Musk, whose company Tesla would be excluded from the legislation to authorize a tax credit up to $12,500 for Americans who buy an electric vehicle made by unionized workers. Musk has a history of being anti-union. Tesla, which disbanded its press department years ago, did not respond to Insider's request for comment ahead of publication.

The Tesla CEO complained about Biden's support of unions, and called the US president out for not inviting Tesla to a White House electric vehicle summit last year.

After Biden met with Ford and General Motors executives at a meeting for EVs in January, Musk responded to Biden's tweet about the meeting saying, "Starts with a T, Ends with an A, ESL in the middle." Both Ford and GM rely on a unionized workforce.

He then responded to another tweet tweeting, "Biden is a damp sock puppet in human form," using a sock emoji.

Musk told the FT he doesn't hate former President Donald Trump, who is 76 years old, even though they have also fought in the past. He is considering setting up a super PAC for moderate candidates called "the Super Moderate Super Pac," he said.
#Donald Trump  #Joe Biden  #Elon Musk  #Tesla
Add Comment