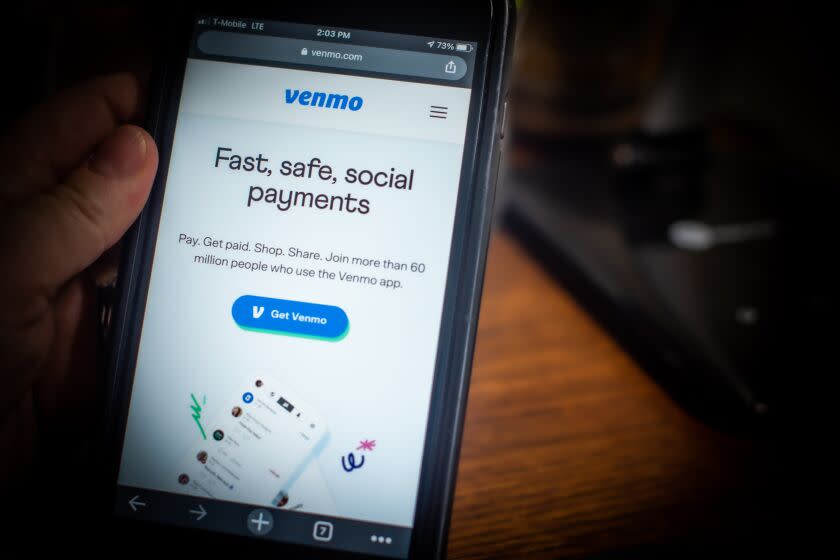 Did someone 'accidentally' send you money on Venmo? You might be getting scammed

I was still in the hazy just-past-newborn phase with my son when someone sent me $500. Between diaper changes and endless bounce sessions on the yoga ball, I got a push notification on my phone.

Free money! Like most new parents, I had plenty of ideas for how to budget an unexpected $500. (Venmo, a digital wallet app owned by Paypal, took a seller transaction fee of 1.9% plus another 10 cents, so my $500 was actually $490.40.) But I had neither possessed nor sold an antique table. I was running on minimal sleep, but my scam sense was tingling. Anna had sent me the money by accident — or had she? Wouldn't you double-check someone's phone number before sending them that much money?

It might have been an honest mistake. I sure would hate to be out that much because I mistyped a digit. I looked into it, and found a Better Business Bureau warning about this "money sent by accident" scam from 2020.

I looked up Venmo's FAQs on what to do. To my surprise, Venmo said I could "simply send the payment back to that user." (Venmo has since updated its guidance: The page says to contact Venmo support if you receive money from someone you don't know.)

How the scam works

Sorin Mihailovici, the editor-in-chief of Scam Detector, said if I'd sent the money back, I might have found myself out $500.

He explained: The scammer steals credit card numbers — which can be purchased in bulk on the dark web — and attaches those cards to accounts on digital wallet apps like Venmo, Cashapp and Zelle. Then, they "accidentally" send money to hundreds or thousands of people at once, whose phone numbers were similarly acquired in some back-alley of the internet. A subsequent request to get the money back goes out to all the targets. Some of those people will ignore it, but others will send the money back.

Software can automate the entire process, Mihailovici said, so even if only 1% of the scam targets send money back to them, "it's an incredible money-making machine with extremely, extremely little effort."

The first victims, whose credit card numbers were stolen, will see the charges and get in touch with their banks, who will likely reverse the charges. So they get their money back.

In its support documentation on payments from strangers, Venmo notes that when you send money back, it will come from your Venmo balance, unless the amount requested is larger than your Venmo balance. Because the seller fee had been taken out, my balance was $490.40, remember?So if I'd sent Anna back a full $500, according to Venmo, it would have been funded entirely by my outside payment method, AKA my credit card or bank account.

If the first transaction was subsequently reversed, I would have had to take it up with my bank to try and get my money back — which only ends up being successful for less than 14% of scam victims on Venmo, said Steve McFarland, the president and CEO of the Better Business Bureau of Los Angeles and Silicon Valley.

Think of it this way: If someone handed you an envelope full of cash and said, "Hey, here's the money I owe you for the antique table!" and then left and a minute later came back and said, "Never mind, you're not the right person," you would hand them back the same stack of bills. But that's not exactly how it works with digital payments. A scammer sends you $500, but if the charge is reversed, that initial $500 is clawed back. The money you sent "back" is a different $500. It's your $500.

So it'd be like someone handing you that envelope, then when they came back, you gave them a different set of bills from your wallet. Then a minute later, someone else came along and said, "That's my envelope of cash, someone stole it from me" and took it back.

Mihailovici said Venmo is not the only app where this scam takes place, but because it's so popular, scammers can find the most targets there. And even the updated guidance from Venmo is contradictory in places, he said: On the "payment from a stranger" page, it tells you to contact support if you get an unexpected payment; but on the "cancel a payment" page, it says if you send someone money by accident, you should ask them to send it back to you.

Venmo declined to make anyone available for an interview for this story. A company spokesperson emailed this statement: "The safety and privacy of all Venmo customers and their information has always been a top company priority. When we become aware of scams, we proactively work with law enforcement agencies and industry partners, and use our own systems to mitigate the issue. We encourage customers who suspect they are the target of a scam or have had an unauthorized transaction to contact Customer Service directly."

What should you do if someone sends you money by accident?

"Absolutely do not refund them," McFarland said.

I decided to let the money sit in my Venmo balance. Anna could work it out with Venmo or her bank if she'd really sent it by accident.

A couple days later, I got spammed with requests to send back the $500. Again, I did nothing. I confess I felt my heartstrings tug a little bit: What if Anna had really sent the money by accident, and really needed it back? But I didn't feel bad enough to potentially lose $500.

I left the money in my Venmo account, and a week after it was sent to me, a payment refund for $500 went through and took the money from my Venmo balance . Venmo issued me a credit for the seller transaction fee, so I never lost any money.

I guess I'll never know whether Anna was a scammer or someone who made an honest mistake. If it's the latter, I do hope she worked it out and is enjoying her table.

This particular scam is in part due to an issue with Venmo's user interface: There is no way to manually decline, refuse or cancel a payment. So if you get a payment you didn't expect from a stranger, the safest thing to do is to let it sit in your Venmo account. But if it's from someone you know — say they accidentally sent you their share of the rent instead of their roommate with the same first name — the right thing to do is to send it back to them.

"Money sent by accident" is not the Better Business Bureau's most complained-about scam, McFarland said. Most of the reports he sees are buyer/seller disputes: The buyer uses a digital wallet app to make a payment, and the seller doesn't deliver the item as promised. It used to be that senior citizens were the most common scam victims, he said, but in the last two to three years, that has shifted: It's now millennials and people just above and below that cohort who are the most likely to fall prey to scams.

Why? "They're on the internet," McFarland said.

And millennials "don't research as much" before they make a purchase online from somewhere like Instagram, TikTok, or Facebook Marketplace, McFarland said. "They said 'yes' very quickly, as they hover over their phone, talking with their friends, doing this and doing that and multiple apps at the same time, and don't have the time to investigate certain purchases and deals, and hoping that the stuff shows up at their door. And they're getting scammed."

What if you send money to the wrong person?

What if you're the Anna in this scenario? You can try to contact customer support for the app you used, or dispute the payment with your bank or credit card, and you might be successful. Or you might not.

"There's pretty much nothing you can do," Mihailovichi said. He compared it to leaving money on the table in a coffee shop and then coming back later in the day. That money's probably gone. In the case of a mistaken payment, you can certainly take Venmo's advice and request it back. You'll just have to hope the other person is kind and understanding — and that they didn't read this article.