The Chinese-built project connects the southern Adriatic coast to the rest of the country.

Croatia has opened a long-awaited bridge linking its southern Adriatic coast, including the popular tourist destination of Dubrovnik, with the rest of the country, bypassing a narrow strip of Bosnian territory.

The 2.4km (1.5-mile) span reaches out from the Croatian mainland to the Peljesac peninsula that connects with the southern part of Croatia’s coastline nestled between the sea and the Dinaric Alps.

The opening of the bridge on Tuesday comes as Croatia is angling for a tourism rebound this year as it hopes to attract pre-pandemic levels of visitors. 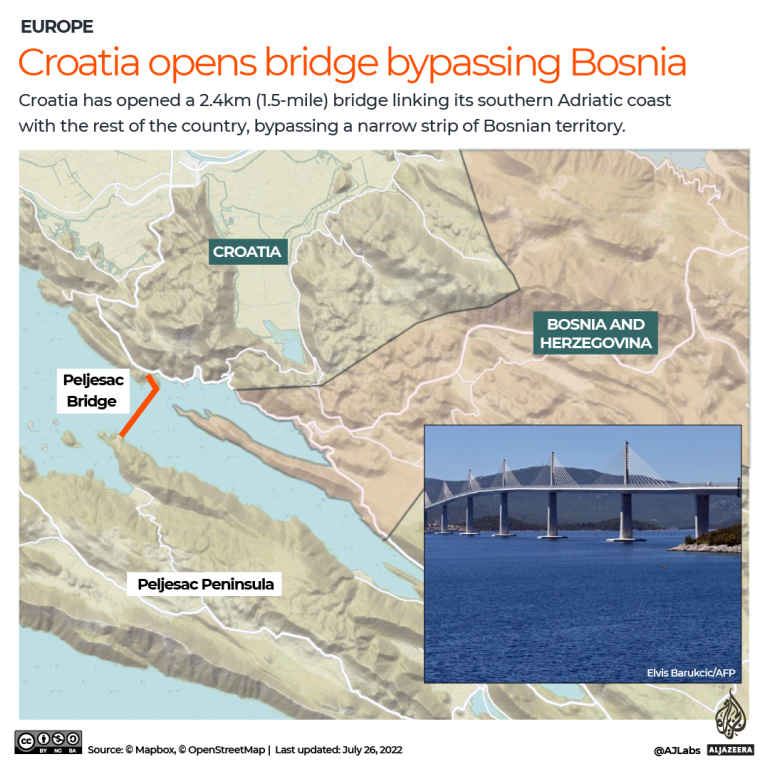 “The importance of the bridge is enormous, and it’s not only emotional due to the connection of Croatia’s territory, but also for tourism and the economy in general,” transport minister Oleg Butkovic said earlier this month.

The link will bring an end to the untold hours spent by commuters, merchants and tourists at the Bosnia and Herzegovina border and is one of the country’s most ambitious infrastructure projects since Croatia declared independence from Yugoslavia in 1991.

It was the bloody dissolution of the federation, however, that left a patchwork of divisions across the Balkans, with the frontiers between its six former republics transformed into international borders.

Bosnia maintained its coastal access in the end, but its small outlet leading to the Adriatic Sea cut right through Croatia.

As a result, approximately 90,000 people, including residents in Dubrovnik, remained cut off from the rest of the country until now.

The hard border brought lines and red tape for traders, and headaches for tourists hoping to get south by road.

“It is indeed a historic project for Croatia,” said Sabina Mikulic, owner of a hotel, glamping site, and winery in Orebic – the peninsula’s largest town.

Inhabitants of the picturesque region of red vines, pebble beaches and oyster farms are looking forward to the end of their geographic isolation caused by the Bosnian border.

The hours-long waits at the border and fears over missing the day’s last ferry will now become a thing of the past, they say. 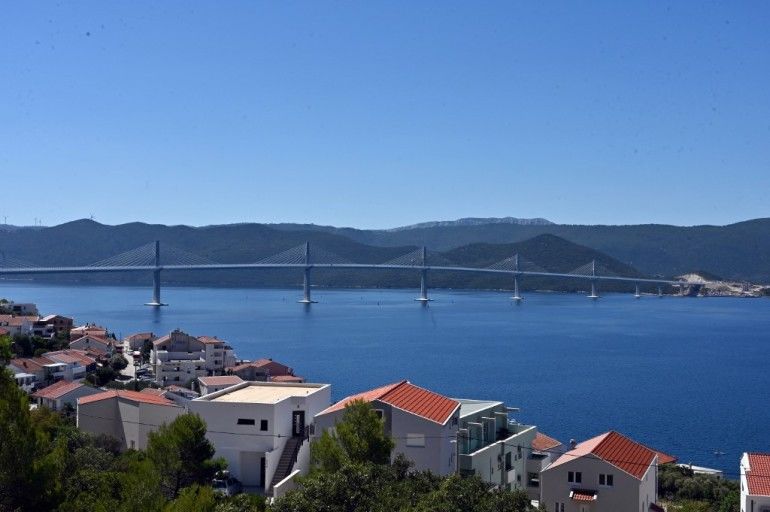 A photograph shows a view of the bridge in the background on July 18, 2022

The opening of the bridge has been a long time coming and not without controversy.

Croatia first attempted building the bridge in 2007, only for the project to stall five years later due to budgetary constraints.

A Chinese firm was selected in 2018 to build the bridge – marking the first significant Chinese involvement in an infrastructure project in Croatia.

But not all were happy with the bridge’s construction, with officials in Bosnia claiming it would hamper its maritime access by preventing high-tonnage vessels from entering its lone port.

The Croatian government eventually agreed to increase the height of the bridge to 55m (181 feet) in an attempt to quell the dispute, even though this increased the cost of the structure.

Croatia, a country of 3.8 million people, attracts millions of tourists every year hoping to soak up the sun along its stunning coast dappled with more than 1,000 islands and islets.

Outside of tourism, the bridge will likely serve as a boon for businesses and traders as well.

For decades, oyster farmer Mario Radibratovic was subjected to hours of extra travel to bring his perishable shellfish north to market due to waiting times at the border.

But with the opening of the bridge, the journey north will shrink dramatically.

For the 57-year-old, the opening of the bridge will bring “immeasurable relief”.

“We are finally becoming part of Croatia,” Radibratovic, who farms oysters and mussels in the village of Mali Ston, told AFP.