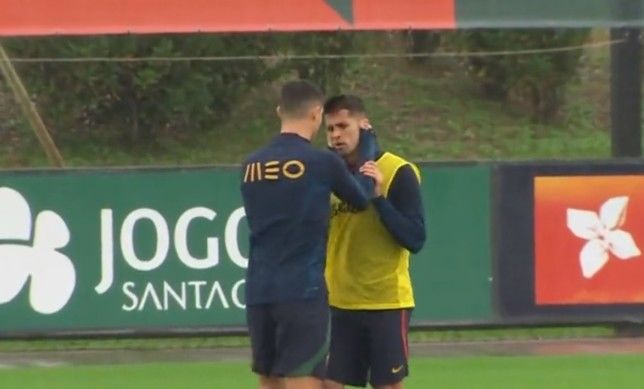 Cristiano Ronaldo involved in altercation with Cancelo during Portugal training

Cristiano Ronaldo was involved in a strange altercation with Joao Cancelo during Portugal’s training session on Tuesday.
The 37-year-old has already angered Manchester United this week after revealing in an interview with Piers Morgan that he has no respect for Erik ten Hag and accusing the Glazers of not caring about the club.

Ronaldo was involved in a frosty exchange with United teammate Bruno Fernandes on Monday, although Portugal midfielder Joao Mario claims the pair were sharing a joke.

And the United forward was at the centre of another bizarre incident with Portugal’s national team on Tuesday, this time with Cancelo.

The Manchester City defender looked visibly unhappy when he was approached by Ronaldo, who then grabbed his head and jolted it towards him.

Cancelo then pushed Ronaldo’s hands away, prompting the United forward to walk away from the situation.

Speaking on Tuesday, Portugal midfielder Joao Mario insisted that Ronaldo’s controversial interview will not have an impact on the national team’s preparations for the World Cup.

‘When we arrive at the selection it’s another working group we try to focus on what’s most important. We’re all used to dealing with great pressure, I don’t think it brings more pressure to anyone,’ Joao Mario said.

‘He’s always happy when he’s in the national team.

‘I saw him yesterday, he’s quite fine as always. As I said before, for him it’s always a please to be here, he’s totally focused on the national team and for sure he is going be a big help for us at this World Cup.’
Add Comment