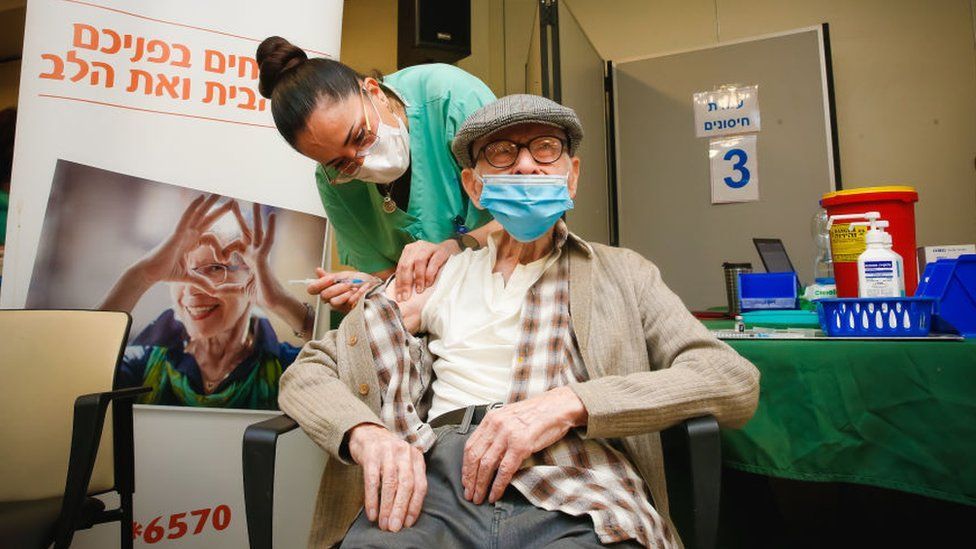 Covid-19: Israel plans to give fourth dose of vaccine to over-60s

A government panel of experts in Israel has recommended a fourth dose of a Covid-19 vaccine for all people aged over 60 and healthcare workers.
The move was welcomed by Prime Minister Naftali Bennett, who said it would help the country get through a potential wave of the Omicron variant.

The Israeli health ministry has so far confirmed 341 cases of Omicron.

The overall Covid-19 infection rate is also back on the rise, with 903 new cases recorded on Tuesday.

Four deaths have also been reported in the past seven days, including that of a 68-year-old man who doctors suspected was infected with Omicron. The health ministry said on Wednesday that he actually had the Delta variant.

On Tuesday night, Israel's Pandemic Expert Committee recommended a fourth dose of the Pfizer-BioNTech vaccine for over-60s, medics, and those with compromised immunity, at least four months after their third jab.

The move is set to receive final approval by the health ministry in the coming days.

"This is wonderful news that will assist us in getting through the Omicron wave that is engulfing the world," Mr Bennett said.

"The citizens of Israel were the first in the world to receive the third dose of the Covid-19 vaccine and we are continuing to pioneer with the fourth dose as well," the prime minister added.

Professor Nadav Davidovitch, the director of the School of Public Health at Ben Gurion University and an adviser to the government, told the BBC: "The vaccine is very safe, so having the fourth dose in terms of side effects this is something that is very minimal."

"The Omicron [variant] is now in Israel. We have now multiplication rates after two days, similar to what's going on in the UK and in South Africa. And following this, we decided that it would be prudent now to suggest that people that got a third dose four months ago can have the fourth dose."

The BBC's Tom Bateman in Jerusalem says the evidence favouring a fourth shot has not yet been released, and the same committee advised against the move only a week ago.

One expert on the panel said there was a "paucity of data" on whether immunity from the third shot was waning, but added the numbers on Omicron infection globally were "terribly frightening".

Israel rolled out its Covid-19 vaccine programme at the world's fastest rate and was the first country to routinely offer a booster shot in the summer.

Almost 70% of those eligible among its 9.3 million population have received two doses, while 45% have received a third dose, according to the health ministry.

In November, the health ministry said children aged five to 11 could also get the jab.

On Monday, Mr Bennett said he wanted every eligible child to be vaccinated within the next two weeks to help "delay and slow and diminish" the strength of another wave of infections.

The government closed Israel's borders to foreign nationals last month in response to Omicron and has now forbidden Israeli citizens and permanent residents from travelling to more than 50 countries on a "red list", including the US, UK, France, Germany, Italy, Spain and much of Africa.
#BioNTech  #COVID-19  #vaccine  #Pfizer  #Covid
Add Comment