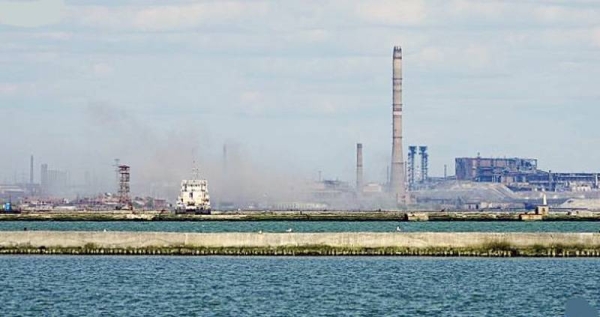 A group of civilians left the steelworks plant in Mariupol overnight, where the last Ukrainian troops are holding out in the besieged port city.
An estimated 100,000 civilians remain in the port city, which has faced constant shelling since early on in the war.

Russia's offensive in the east of the country has continued as Ukrainian forces fight village by village to stall their advance.

A top official with the Azov Regiment, the Ukrainian unit defending the plant, said 20 women and children were evacuated during a cease-fire.

Several Russian state media outlets reported that 25 civilians were evacuated from the plant. It was not immediately clear if they were referring to the same group of civilians.

"They have been transferred to an agreed place and we hope that they will be evacuated to Zaporizhzhia, in the territory controlled by Ukraine," said Sviatoslav Palamar, deputy commander of the Azov regiment, in a video on Telegram.

Pope Francis on Sunday repeated his call for humanitarian corridors to evacuate civilians trapped in the besieged Ukrainian port city of Mariupol.

"My thoughts are with the Ukrainian city of Mariupol, the city of Mary, bombarded and destroyed in a barbaric way. I renew the request that safe humanitarian corridors be set up for the people trapped in the steel mill of that city," the Pope said during his Angelus prayer.

"I suffer and cry, thinking of the suffering of the Ukrainian population and in particular of the weakest, the elderly and children," the Pope said, according to the Vatican.

He asked people not to surrender to the logic of violence and to take the path of dialogue and peace.

Also, Poland’s armed forces said that military exercises involving thousands of NATO soldiers have begun. The exercises are aimed at improving the security of the alliance's eastern flank.

Poland’s military appealed to the public on Sunday not to publish information or photos of the columns of military vehicles expected to move through the country in the coming weeks. It warned that “ill-considered activity” could harm the alliance’s security.

The Polish Army said in a statement that 18,000 soldiers from over 20 countries were taking part in the Defender Europe 2022 and Swift Response 2022 exercises that are taking place in Poland and eight other countries. The exercises are scheduled to run from May 1 to 27.

Meanwhile, deliveries of Russian gas to EU countries and Turkey fell sharply between January and April compared to the same period in 2021, while those to China exploded, Gazprom announced on Sunday.

Exports to the EU and Turkey amounted to 50.1 billion cubic meters, or 26.9% less than in the same period of 2021, Gazprom, Russia's majority state-owned energy company, said.

Gazprom says it will continue to supply gas "in full compliance with contractual obligations".

In another development, a Russian troll farm is spreading lies on social media and "in comment sections of popular websites," the UK foreign office said in a statement released on Sunday based on government-funded research.

The foreign office said cyber soldiers were targeting people across several countries including the UK, South Africa and India.

They accused the cyber teams of working from an old factory in St Petersburg, Russia, and said the operation was suspected to be linked to Yevgeniy Prigozhin, the founder of an infamous bot farm.

The foreign office said these trolls were attempting to influence opinions of the war in Ukraine and had targeted senior UK ministers and other leaders.

Ukrainian President Volodymyr Zelenskyy switched into Russian in his nightly video address to urge soldiers not to fight in Ukraine, saying even their generals expected that thousands of them would die.

He said Russia has been recruiting new troops “with little motivation and little combat experience” for the units that were gutted during the early weeks of the war so these units can be thrown back into battle.

He said Russian commanders fully understand that thousands of them will die and thousands more will be wounded in the coming weeks.

“The Russian commanders are lying to their soldiers when they tell them they can expect to be held seriously responsible for refusing to fight and then also don’t tell them, for example, that the Russian army is preparing additional refrigerator trucks for storing the bodies. They don’t tell them about the new losses the generals expect,” Zelenskyy said late Saturday.

“Every Russian soldier can still save his own life. It’s better for you to survive in Russia than to perish on our land,” he said.

And, after seizing the southern Ukrainian city of Kherson in early March, "Russia has sought to legitimize its control of the city" by installing a pro-Russian administration, according to the UK Ministry of Defense.

Russia announced a four-month currency transition in the city to the ruble. "The Russian ruble is due to be used in Kherson from today," the UK said in its latest defense intelligence update.

"These statements are likely indicative of Russian intent to exert strong political and economic influence in Kherson over the long term," the Defense Ministry added.
#Pope Francis
Add Comment