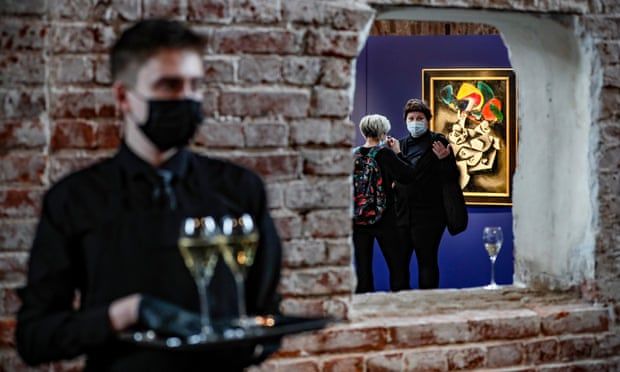 Britain blocks luxury exports to Russia worth hundreds of millions

Government says ban intended to ensure ‘oligarchs and other members of the elite’ are deprived of goods
Russian oligarchs will no longer have access to baubles such as the cars, artworks and designer handbags sold by British companies, after the government blocked exports worth hundreds of millions of pounds.

Last year, UK firms in total sold £2.6bn worth of goods to Russia, the biggest slice of which was cars, at around £400m, as wealthy Russians splashed out on prestigious marques such as Aston Martin, Bentley and Rolls-Royce.

Many luxury goods companies have already voluntarily stopped doing business in Russia but the ban would “make sure oligarchs and other members of the elite are deprived of access to luxury goods”, the government said.

Helen Brocklebank, the chief executive of Walpole, the trade body for the UK luxury sector, said it was “fully supportive” of the sanctions.

“All of our members have immediately complied with the sanctions imposed and are working to support local employees in any way they can,” she said of its 250 members which include Bentley, Burberry and Rolls-Royce.

The clampdown on Kremlin-linked wealth has thrown the spotlight on Britain’s art market amid fears Russian oligarchs could use legal loopholes to evade sanctions.

Sotheby’s said it had already stopped the import and export of artefacts to and from Russia and its office in Moscow was currently closed. The company, which does not conduct auctions in Russia, promised to “rigorously follow the sanctions and regulations”.

Christie’s, which has also shut its office in Moscow to the public, said it had taken the decision to cancel its Russian art sales which were due to take place this summer in London.

Cars are the UK’s number one export to Russia with annual sales of £386m – or nearly 15% of all exports to the country - according to the most recent data from the Department for International Trade. The other big markets are for medicine, machinery and power generators, the data showed.

Despite its prominence in the export data, Russia is relatively small market for UK car plants – it is thought that the UK exports fewer than 10,000 cars a year to Russia out of an annual production on 860,000 in 2021. However, there are Aston Martin, Bentley and Rolls-Royce showrooms in Moscow and St Petersburg, as well as dealers stocking cars from BMW-owned Mini.

Although overall sales volumes in Russia are low, the expensive cars being sold there have high profit margins, said David Bailey, professor of business economics at the University of Birmingham. The export ban was “another hit” for British carmakers who, he said, are already facing difficulties due to ongoing shortages of semiconductor computer chips.

Bailey said British brands such as Range Rover sold well in Russia in part because of the “state of the roads”. It is “partly about the premium and luxury nature of British cars but also their off-road capabilities”, he said.

“Jaguar Land Rover (JLR) pulled out basically because they thought was the right thing to do,” said Bailey, who added that the collapse of the rouble would also make it difficult for companies to price expensive cars. “It’s not good news for the likes of Jaguar Land Rover, Bentley and Rolls-Royce.”

JLR and Aston Martin have already paused deliveries to Russia. A spokesperson for Bentley Motors said it too had also stopped the export of cars destined for Russia “until further notice”.

The scale of spending on luxury goods in Russia is not of the same magnitude as in countries such as China and the US. The annual spend on cars, jewellery and designer fashion is put at about £7bn – a figure split between the domestic market and high-end stores of London and Dubai – by analysts at the investment bank Jefferies.

Earlier this month Burberry, one of Britain’s most famous exports, temporarily closed its three outlets in Russia which includes a shop in Moscow’s famous Red Square.

The UK government is yet to provide a detailed breakdown of the luxury goods covered by its export ban but analysts think it will be similar to the EU’s, which includes clothing, accessories, precious stones and works of art. It is not clear if Scotch whisky will be on it too; while famously vodka drinkers, Russians are also partial to a malt, with 42m bottles, worth nearly £28m, exported there last year.
Add Comment