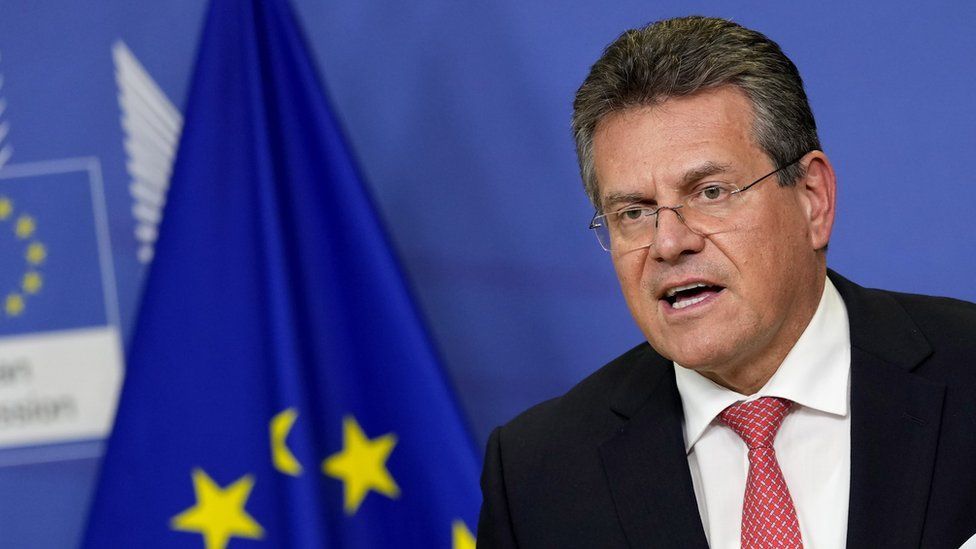 There will be "serious consequences" if the UK triggers Article 16, European Commission (EC) Vice-President Maros Sefcovic has warned.

Mr Sefcovic said the move would be "serious for Northern Ireland as it would lead to instability and unpredictability".

His comments follow a meeting with the UK's Brexit minister in Brussels over the protocol dispute.

Lord Frost said progress at the meeting was "limited".

He said gaps could still be bridged through intensive negotiations.

The protocol is the special Brexit deal agreed to prevent a hard border on the island of Ireland. 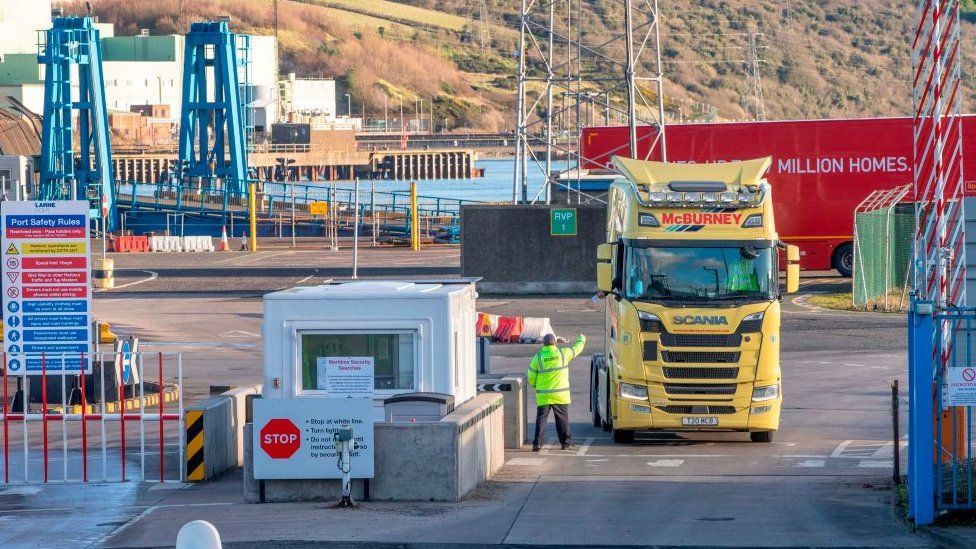 It keeps Northern Ireland in the EU's single market for goods and allows free-flowing trade with the EU.

But it also creates a trade border between Northern Ireland and Great Britain.

The EU has proposed measures to ease the checks and controls for goods crossing the Irish Sea.

But the UK is demanding fundamental reform and there is growing speculation it will trigger Article 16 - which allows parts of the protocol to be unilaterally suspended if they are causing serious difficulties - in the coming weeks.

'Time running out' on talks

Mr Sefcovic said triggering Article 16 would be serious for EU-UK relations "as it would mean a rejection of EU efforts to find a consensual solution to the implementation of the protocol".

He said that despite a "big move" by the EU on its proposals, "until today we have seen no move at all from the UK side". 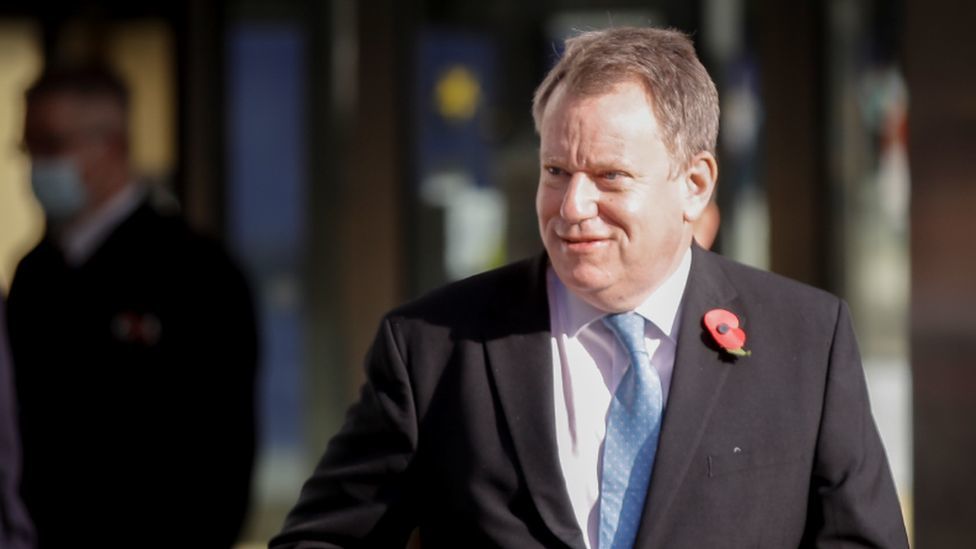 Following Friday's meeting, a UK spokesperson said Lord Frost had indicated "the EU's proposals did not currently deal effectively with the fundamental difficulties in the way the protocol was operating".

"He underlined that the UK's preference was still to find a consensual solution that protected the Belfast (Good Friday) Agreement and the everyday lives of people in Northern Ireland," the spokesperson added.

Before the meeting, Lord Frost had warned time was running out on the talks.

He had said the UK was not going to trigger Article 16 on Friday, although this was "very much on the table and has been since July".

What would triggering Article 16 mean?

There is growing speculation that the UK is planning to use Article 16 of the Northern Ireland Protocol in the coming weeks.

The Irish government says such a move would be "reckless and irresponsible", and Maros Sefcovic has warned it could result in "serious consequences".

Ultimately, the EU could impose tariffs on UK goods - but that would only be possible after a lengthy arbitration process.

The arbitrators would first have to find that the UK is in breach of the protocol.

Then the UK would have to refuse to remedy that breach, at which point the EU could retaliate under the terms of the wider Brexit deal, the TCA.

It could require another arbitration process to rule whether the use of tariffs is proportionate retaliation.

There is a potentially faster legal track - known as infringement proceedings - which could lead to the UK being fined.

Lord Frost added that if the gap narrowed, the commission listened to what was said in the UK command paper and looked at the situation in Northern Ireland, that could help move things forward.

He would not give a timescale on how long negotiations could last but said they were trying to reach agreement and were going to "carry on trying".

The European Commission has also ruled out talk about deadlines but it is understood the EU could look to legally challenge any move by the UK to trigger Article 16.

Ultimately, the EU could impose tariffs on UK goods, but that would only be possible after a lengthy arbitration process.

EC spokesman Daniel Ferrie told reporters in Brussels on Friday that the commission was "fully concentrated on finding solutions".

He said the EU's proposals were "far-reaching and ambitious".

Democratic Unionist Party (DUP) leader Sir Jeffrey Donaldson said he expected to see decisive action on the protocol before the end of November.

Sir Jeffrey, whose party opposes the protocol, said he would meet Lord Frost next week to discuss the issue.

"I hope agreement can be reached but if it can't then within weeks I want to see the UK government taking decisive action."

What are the UK-EU discussions about?

The EU accepts the Northern Ireland Protocol is causing difficulties for many businesses but its proposed measures to ease checks and controls for goods crossing the Irish Sea have not been accepted by the UK government.

It is seeking more wide-ranging reform of the protocol.

Last month, Lord Frost said the UK government would not trigger Article 16 "gratuitously or with any particular pleasure".

Article 16 can be triggered if the protocol is leading to serious "economic, societal or environmental difficulties" that are liable to persist.

If the UK was to use Article 16 to suspend most controls on goods going from GB to NI, that could cause significant problems for Ireland.

It could reopen questions about goods being controlled as they cross the Irish border or as they leave Ireland for the rest of the EU.

Taoiseach (Irish PM) Micheál Martin has said it would be "irresponsible and reckless" for the UK to trigger Article 16. 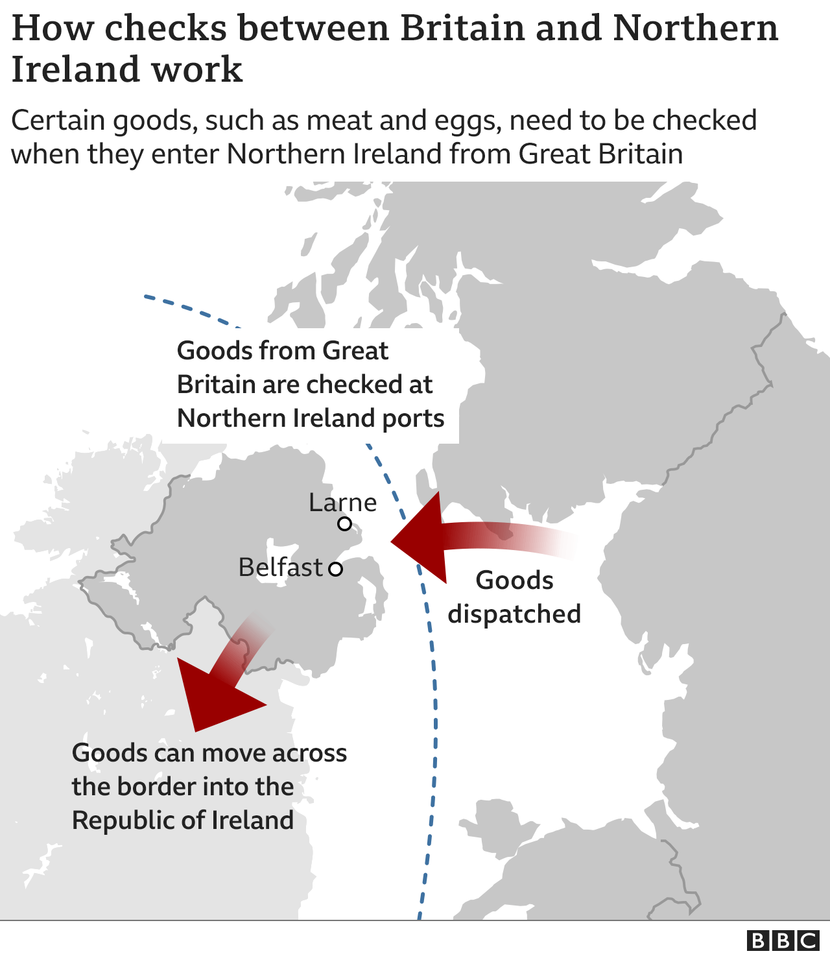 Meanwhile, a survey has indicated that the protocol is not a top priority for most people across Northern Ireland, including unionists.

Unionist parties in Northern Ireland oppose the protocol, as they say it undermines their place in the UK.

It ranked fourth on the list of priorities behind health, Covid recovery and the economy.

The survey also shows the majority of the 1,000 people asked would support remaining in the UK if a border poll was held "tomorrow".

Reacting to the survey, Sir Jeffrey said he did not agree that people do not care about the protocol, saying it was a "big issue for many people, particularly those businesses that are being harmed".

"They do care about the protocol and they also care, as I do, about other issues like health, like Covid recovery, the economy. 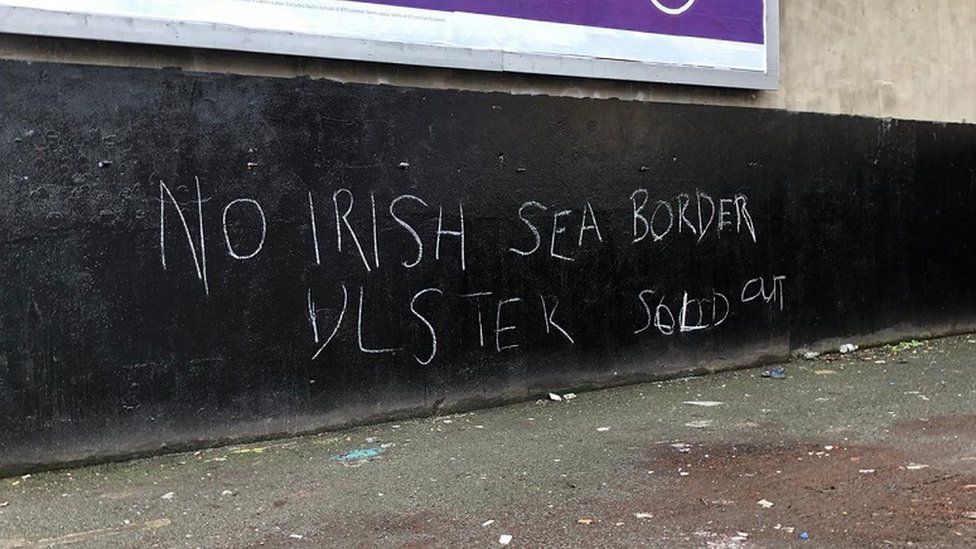 "These things are important and they are all inextricably bound up in our membership of the union."

Commissioned by the University of Liverpool, the survey questioned people across all of Northern Ireland's council areas last month.

Of those who responded, 39% described themselves as unionist, 26% nationalist and 33% neither unionist or nationalist

The survey indicated that just over 9% said the protocol was their biggest concern.

When broken down, just 12% of unionists said the protocol was the important issue for them.

More than 60% also said they wanted the Stormont Executive to remain in place until the Assembly election in May.

When asked how they would vote in a border poll "tomorrow", 58% of those surveyed supported remaining in the UK, with 29% voting for a united Ireland.