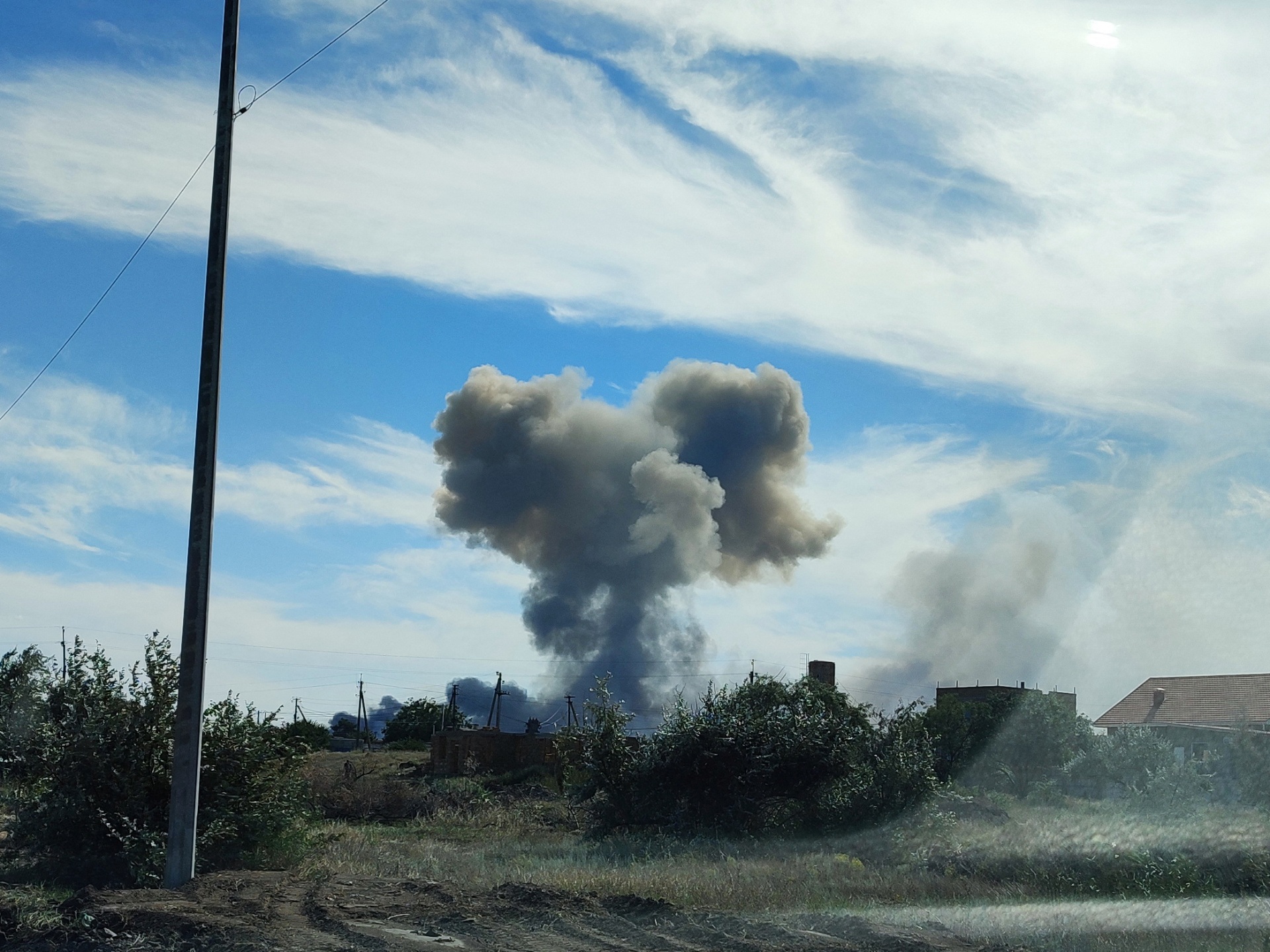 One person killed and several others injured in the Russian-annexed territory, local authorities say as Russian forces continue their bombardment across Ukraine.

One person has been killed and several others wounded by explosions at a military airbase at Saki in the Russian-controlled Crimean Peninsula, local Russian authorities have said.

Russia’s Ministry of Defence said the “detonation of several aviation ammunition stores” had caused an explosion. It said there had been no attack and no aviation equipment had been damaged.

The Reuters news agency cited witnesses saying they had heard at least 12 explosions around 3:20pm local time (12:20 GMT) from the air base near Novofedorivka on the west coast of the peninsula, which Russia annexed from Ukraine in 2014 and used in February as one of the launchpads for its invasion.

Unverified videos posted on social networks showed sunbathers fleeing a nearby beach as huge clouds of smoke from the explosions rose over the horizon.

Crimea’s health department said one civilian had been killed and another eight injured.

The head of Crimea’s administration Sergey Aksyonov said ambulances and medical helicopters were sent to the Saki airbase and the area was sealed off within a radius of five kilometres (three miles). 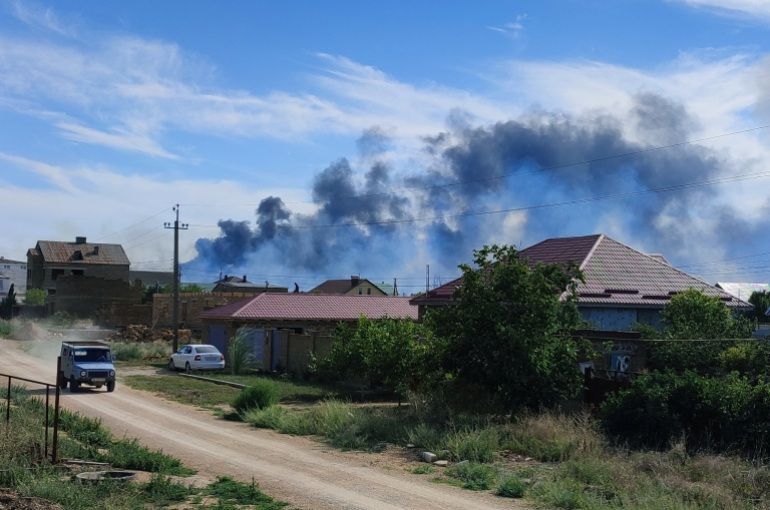 Smoke rises after explosions were heard from the direction of a Russian military airbase near Novofedorivka, Crimea August 9, 2022

Ukrainian President Volodymyr Zelenskyy did not directly mention the blasts in his daily video address on Tuesday but said it was right that people were focusing on Crimea.

“We will never give it up… the Black Sea region cannot be safe while Crimea is occupied,” he said, reiterating Kyiv’s position that Crimea would have to be returned to Ukraine.

Ukraine’s defence ministry earlier issued a statement in a heavily suggestive tone reminiscent of its response to unexplained blasts on Russian territory, saying it “once again draws attention to fire safety rules”.

If the base was, in fact, struck by the Ukrainians, it would mark the first known major attack on a Russian military site on the Crimean Peninsula and a significant escalation of the conflict.

The headquarters of Russia’s Black Sea Fleet in the Crimean port of Sevastopol was hit by a small-scale explosion delivered by a makeshift drone last month in an attack blamed on Ukrainian saboteurs.

Officials in Moscow have long warned Ukraine that any attack on Crimea would trigger massive retaliation, including attacks on “decision-making centres” in Kyiv.

The Saki base has been used by Russian warplanes to attack areas in Ukraine’s south on short notice. Crimea borders the southern Ukrainian region of Kherson, now controlled by Moscow.

Meanwhile, Ukrainian officials reported at least three Ukrainian civilians were killed and 23 wounded by Russian shelling in 24 hours, including an attack not far from the Russian-occupied Zaporizhzhia nuclear power plant, which is also not far from the Saki base.

The Russians fired more than 120 rockets at the town of Nikopol, across the Dnieper River from the plant, Dnipropetrovsk Governor Valentyn Reznichenko said. Several apartment buildings and industrial sites were damaged, he added.

Ukraine and Russia have accused each other of shelling the power station, stoking international fears of a catastrophe. 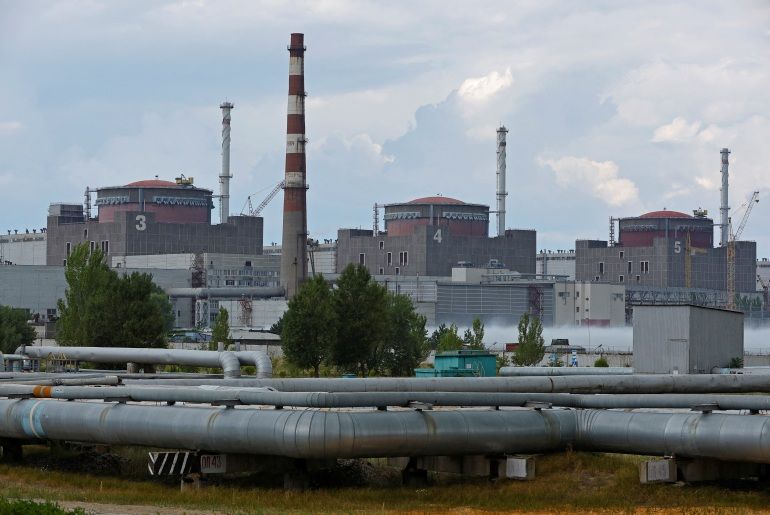 The governor of the region where the plant is situated, Oleksandr Starukh, said Tuesday that radiation levels were normal. But he warned that an accident could spread radiation whichever way the wind blows, carrying it to Moscow and other Russian cities.

A Russian-installed official in the partially occupied Zaporizhzhia region said an air defence system at the plant would be reinforced in the aftermath of last week’s shelling.

Evgeny Balitsky, head of the Kremlin-backed administration, told Russian state TV that power lines and other damaged portions of the plant were restored.

The Ukrainians in recent weeks have been mounting counterattacks in Russian-occupied areas of southern Ukraine while trying to hold off the Kremlin’s forces in the industrial Donbas region in the east.

Battles in the east

Heavy fighting was also reported in front-line towns near the eastern city of Donetsk, where Ukrainian officials said Russian troops were launching waves of attacks as they tried to expand their control of the industrialised Donbas region.

The Ukrainian military said it had repelled ground assaults in the direction of the cities of Bakhmut and Avdiivka.

Chechen leader Ramzan Kadyrov said his forces had captured a factory for Moscow on the edge of the eastern town of Soledar. Other Russian-backed forces said they were in the process of “clearing out” the heavily fortified village of Pisky. Russian media reported that a group of mercenaries from the Wagner Group had dug in near the city of Bakhmut.

Al Jazeera could not independently verify the different accounts from the battlefield.

British military intelligence, which is helping Ukraine, said Russia’s push towards Bakhmut had been its most successful operation in the Donbas in the last 30 days, but that it had still only managed to advance approximately 10km (six miles).