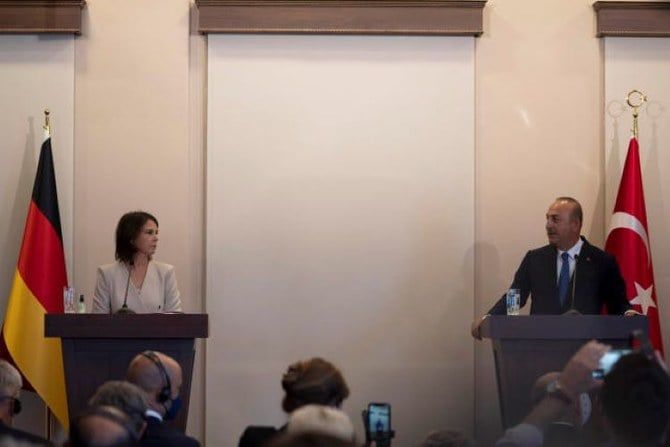 A surprise high-ranking meeting in Brussels between Turkiye, Greece and Germany has raised hopes that strained ties between Athens and Ankara can be improved through the mediation of the EU’s political and economic powerhouse.
Turkish Presidential Spokesperson Ibrahim Kalin, German Chancellery Foreign and Security Policy Adviser Jens Ploetner and Greek Prime Ministry Diplomatic Office Director Anna-Maria Boura met in an effort to strengthen communication channels between Turkiye and Greece, two NATO allies.

No further information was released about the Berlin-brokered meeting that was held at the office of the German representation to the EU.

Turkiye and Greece have disagreed over several deep-rooted issues ranging from overflights to the military buildup in the Greek islands near Turkiye’s coastline, the exploration of mineral resources in the Aegean and competing claims for offshore waters.

Previous agreements between the two countries required that the islands remain demilitarized.

Erdogan repeatedly issued direct threats over the Greek military presence on the islands, saying: “We might suddenly come one night.”

The Greek Foreign Ministry, however, released a statement in early December: “The statements made by Turkish officials on the demilitarization of the Aegean islands have been repeatedly rejected in their entirety on the basis of a series of arguments, which are also contained in the relevant letters that Greece has sent to the UN secretary-general.”

During the dispute, Germany has always tried to appease the two NATO partners and act as a mediator in the standoff.

In October, German Chancellor Olaf Scholz urged Ankara to end its threats against Greece over the islands and called on both sides to solve the dispute through international law.

Jannes Tessmann, head of Germany’s Stiftung Mercator’s Istanbul office, said that Germany has a strong interest in resolving the Mediterranean conflict between Greece and Turkiye for a number of reasons.

“However, there are reasons not to have high expectations of the talks: Elections in both countries make concessions difficult. Moreover, Germany has lost credibility as a mediator after German Foreign Minister Annalena Baerbock’s last visit to Turkiye and Greece. Turkish Foreign Minister Cavusoglu accused her of partisanship,” Tessmann told Arab News.

During a joint press conference in Istanbul last July, the Turkish and German foreign ministers argued over disputes between Ankara and Athens, with Cavusoglu claiming that Germany had lost its impartiality in mediating between Turkiye and Greece.

According to Tessmann, there are few countries outside the EU with which Germany has as close a relationship as Turkiye.

Therefore, developments in Turkiye often have a direct impact on Germany, economically, socially and politically, he said.

From this perspective, experts note that any normalization of ties between Ankara and Athens could deepen cooperation prospects in other spheres and would bring benefits to all.

Kristian Brakel, head of office at the Heinrich Boll Foundation Turkiye, said that the meeting was a promising step toward getting the parties back to the table.

“With elections upcoming in both countries in 2023, for now deconfliction is the priority,” he told Arab News.

“I believe neither country wants a real conflict, so agreeing on a simple mechanism or some red lines that would ensure that heated rhetoric will not lead to accidental clashes would be worth a lot,” he added.

In a situation where NATO is needed more than ever, Brakel added that Germany, as an ally to both Turkiye and Greece, is interested in building cohesion against Russia amid the war in Ukraine.

“Decision-makers in Europe are aware of this, but the eastern Mediterranean conflict makes constructive cooperation with Turkiye difficult on many other levels,” he added.

Communication channels between Athens and Ankara closed, especially after Erdogan said that Greek premier Kyriakos Mitsotakis “no longer exists” for him after the latter reportedly lobbied to block sales of F-16 fighter jets to Turkiye during his visit to the US.

“During 2020-2021, Germany served as a central mediator between Greece and Turkiye in the mitigation of the so-called east Med crisis,” she told Arab News.

“Due to its balanced stance toward both countries and its rejection of imposing hard sanctions on Turkiye, the then German federal government was perceived as a credible mediator by Ankara,” she added.

However, after Scholz’s visit to Athens in October and the prospects of an arms deal between Athens and Berlin, Turhan said that Germany’s role as a trustworthy and balanced crisis manager deteriorated in the eyes of Turkish political elite and mass media.

“With a nuanced and constructive approach both toward Turkiye and Greece, the German federal government could regain its role as a balanced and reliable mediator in the east Med crisis,” she said.

“This would also moderate and weaken the politicization and mediatization of German-Turkish relations ahead of upcoming Turkish elections, and improve German-Turkish bilateral relations,” Turhan added.

In order to restore their strained relations, Turhan said that Greece and Turkiye should focus on depoliticizing and removing media influence from their dialogue.

“The political elite in both countries should negotiate and deliberate on common challenges behind closed doors in a professional setting rather than reverting to harsh public statements — what we also call megaphone diplomacy,” she said.
#Angela Merkel
Add Comment