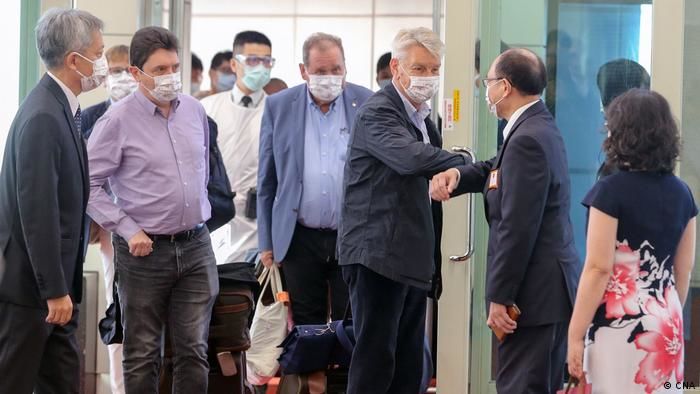 China has reacted angrily after a French lawmaker referred to the island of Taiwan as a country. Tensions between Beijing and Taipei have reached new levels in recent weeks.

French Senator Alain Richard met with Taiwanese President Tsai Ing-wen on Thursday, during which he said that the Taiwanese representative office in Paris was doing "a very good job in representing your country."

Beijing considers the self-run island just off the Chinese mainland part of its territory and demands that international partners only formally recognize China.

Chinese Foreign Ministry spokesperson Zhao Lijian said the reference to Taiwan as a country was a "flagrant violation of the universal consensus of the international community, including France."

"People like Richard either lack the most basic respect and understanding of international relations norms, or they kidnap state-to-state relations based on personal selfishness," Zhao said. "China strongly condemns and firmly opposes this."

What did the French visit consist of?

The visit by the French delegation, led by Richard, had already been protested by the Chinese embassy in Paris. The ambassador wrote to Richard back in February saying the meeting would "violate the one-China principle."

Richard heads the French Senate's Taiwan Friendship Group. While France only maintains official relations with Beijing, it has a de facto embassy on the island, staffed with French diplomats.

"It's a fine diplomatic issue, but what is striking to me is that the name of this island and this country is Taiwan," the French senator said, speaking in English. "So there is no big point in trying to, you know, prevent this country to use its name."

"We are very moved that Senator Richard is undaunted by the pressure ... to make his third visit to Taiwan," President Tsai said on Thursday.

The remarks over the status of Taiwan came amid rising regional tensions. Beijing has recently stepped up verbal threats to take the island, which it considers a renegade province, by force.

The Chinese air force has also been conducting military drills near Taiwanese airspace. A defense official in Taipei said that there had been a record 150 Chinese incursions into Taiwan's air defense zone in recent weeks.

Tensions ramped up further on Friday after it came to light that US Special Forces had been training soldiers in Taiwan for months. Washington and Taipei had previously denied that the Taiwanese military was receiving US training.

Beijing said in response that it would "take all measures" to protect its national "sovereignty and integrity."