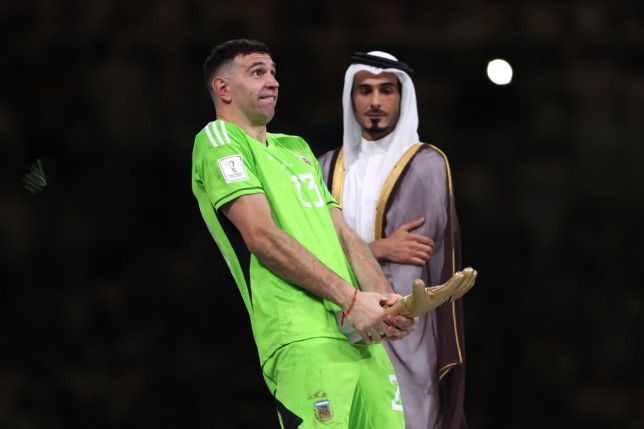 Emiliano Martinez put a unique spin on a trophy presentation, producing a lewd celebration when he was handed his Golden Glove award after the World Cup final.

Argentina had just beaten France on penalties in Doha after a classic contest finished 2-2 after 90 minutes and 3-3 after extra-time.

Martinez had moved a crucial save late in extra-time and then saved Kingsley Coman’s spot-kick to help his country to glory and was awarded the trophy for the tournament’s best goalkeeper as a result.

The Aston Villa stopper didn’t go down the traditional route of celebrating the award, instead he held it with both hands by his groin and thrust towards the crowd.

It is something of a trademark move from Martinez who did the same thing when he won the Golden Glove at the Copa America last year.

Having just been one of the heroes in a World Cup winning effort you can largely do what you want, but Martinez’s celebrations may not have been looked upon fondly by the Qataris running the show. 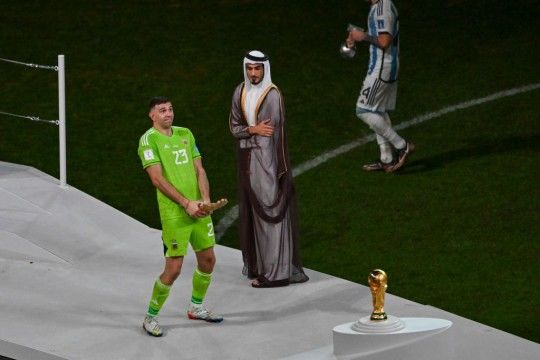 Emiliano Martinez really enjoyed himself after the World Cup final
Martinez and the rest of Argentina will not care though after they won the World Cup for a third time and produced one of the most memorable finals in the tournament’s long history.

Lionel Messi and Angel Di Maria gave the South Americans a 2-0 lead in the first half and they looked to be strolling to victory before Kylian Mbappe turned things around late on.

The Frenchman scored a penalty on 80 minutes and then volleyed past Martinez just moments later to take the match to extra-time.

There it was more goals from the superstars involved as Messi put his country ahead again before another Mbappe penalty took the match to spot-kicks.