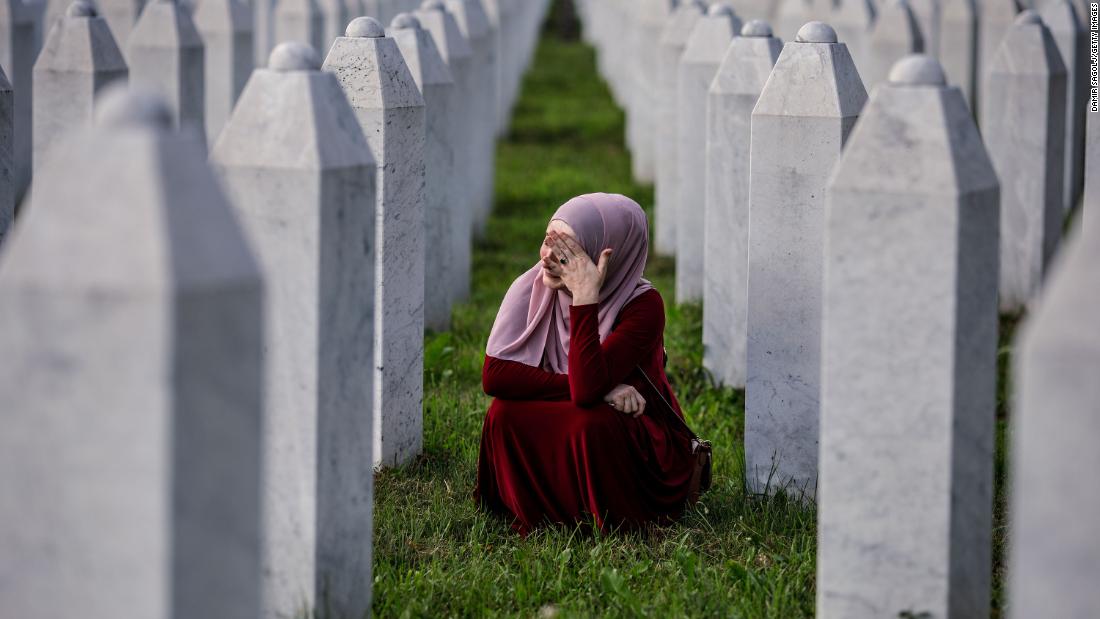 Analysis: A dangerous crisis is brewing in the Balkans

The Balkan state of Bosnia-Herzegovina is on the verge of what analysts warn is its most serious crisis since the end of the Bosnian war in 1995, in which thousands were killed and horrendous acts of ethnic cleansing were committed.

The international community's High Representative in Bosnia, Christian Schmidt, warned earlier this week that the US-brokered peace agreement signed at the end of the war is at risk of collapsing unless action is taken to stop Serbian separatists from pushing towards secession.

Milorad Dodik, the Serbian leader in Bosnia's three-person presidency, has over time repeatedly threatened to break away from the rest of the country, which has since the war been made up of two autonomous regions linked by a central government. This time, however, he is putting some flesh on the bones by introducing legislation that would divorce Republika Srpska (Serb Republic) from the state's joint institutions like the armed forces and judicial bodies.

"This is tantamount to secession without proclaiming it," Schmidt told the UN Security Council, which met this week to reauthorize the longstanding mission of the European Union-led peacekeeping force EUFOR.

In a country where ethnic divisions between Serbs, Bosniaks and Croats led to war crimes being committed in recent history, this level of tension is making observers very nervous.

"There is no question that this is by far the most dangerous crisis since 1995 and that it could lead to another war," said Ismail Cidic, president of the Bosnian Advocacy Center, an independent NGO that advocates for a free, sovereign, democratic and secular Bosnia-Herzegovina. 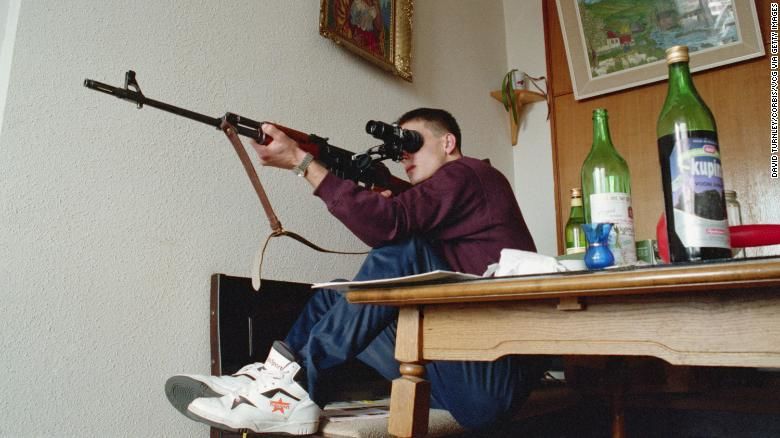 A Bosnian sniper attempts to shoot Serbian snipers in the mountains from his position on the 20th floor of a Sarajevo building during the war in the 1990s.

Why is it happening now?

Sectarian tensions between the communities have persisted ever since the end of the war and signing of the US-brokered Dayton agreement.

The treaty ended the three-and-a-half-year war by dividing the state along ethnic lines, into the Serb Republic and the Federation, which is shared by both Bosniaks and Croats. The two regions are tied together by a three-person presidency, international envoys, and a central government.

No peace treaty can erase the murder, systemic rape and other horrors people lived through during the war, but one incident lingers in the memory more than others: the Srebrenica massacre that took place between July 11-22, 1995.

Thousands of Muslim men and boys were murdered by Bosnian Serb forces. Their leaders were later convicted of war crimes and the massacre has been recognized as a genocide by the international community. However, not all Serbs are willing to accept this.

One such person is Dodik -- who has been particularly irked by the recent introduction of a law by the High Commissioner's office that could hand prison sentences to anyone who denies that genocide was committed.

Earlier this year, he said of the law: "This is the nail in Bosnia's coffin ... The Republika Srpska has no other option but to start the ... dissolution." 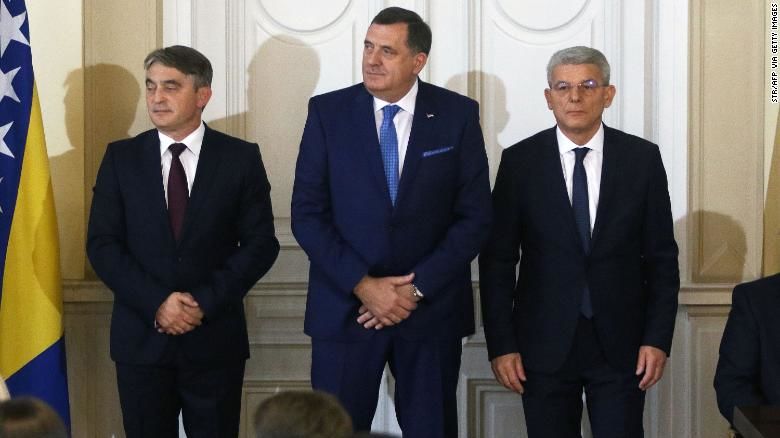 How bad could things get?

Observers fear that even if Dodik doesn't move towards secession, his actions could be seriously destabilizing and cause violence, forced migration and abject misery for ordinary people.

"Citizens throughout Bosnia-Herzegovina -- including in the entity of Republika Srpska -- fear violence," said Arminka Helić, a Bosnian-born politician who is now a member of the British House of Lords and former special advisor to the British foreign secretary. "A further move towards secession would likely lead to a reaction. There is no way the breakup of Bosnia Herzegovina can be done peacefully."

Heather Staff, an advisor at RAMP Project, an organization specializing in migration policy, warns that "violent conflict will lead to a refugee crisis, and displaced people -- in the 90s and 2000s we saw people fleeing Bosnia to neighboring countries such as Montenegro."

She says this is a region "where rhetoric at times has been harsh regarding the treatment of asylum seekers ... how would those fleeing be treated in neighboring countries?"

The impact would of course be felt beyond the borders of Bosnia-Herzegovina.

Jasmin Mujanović, author of the book 'Hunger and Fury: The Crisis of Democracy in the Balkans,' said it would be a "catastrophe for the European Union and the Atlantic community more broadly, as it would be yet another security crisis in an already extremely volatile southeast of Europe." He pointed out that with security crises already existing in Ukraine, Belarus, Syria and Afghanistan "a significant deterioration in the security and stability of Bosnia is something that both the EU and the US can ill afford."

As is so often the case in geopolitics, a poke in the eye for the West provides an opportunity for rivals like Russia and China. A senior EU official told CNN of their concern at how the situation could be exploited.

"We are stuck between a rock and a hard place. The international community cannot be seen to be victimizing the Serbs, as it pushes them and Serbia further into Russia's arms. But the Balkans are on the EU's doorstep. Increased Russian influence in the region gives them another foothold and platform for influence, if they want to destabilize things further." 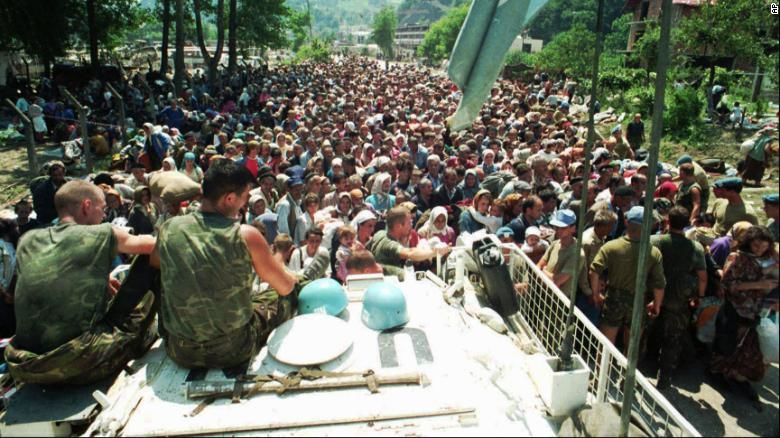 Dutch UN peacekeepers sit on top of a vehicle while Muslim refugees from Srebrenica gather in the nearby village of Potocari on July 13, 1995.

Who is to blame?

Many in the West accept in private that it has thus far failed to step up to the plate and it might now be too late. Multiple sources in the EU, NATO and the wider European diplomatic community expressed regret at the West's historic failure to place sanctions or act otherwise against those fanning the flames in Bosnia-Herzegovina.

"Dodik and his clique of secessionists and genocide deniers have been appeased consistently for 15 years by the international community. He has been talking about -- and moving towards -- secession since 2006," said Helic.

Mujanović said that while neighboring Serbia and Russia are the "primary architects of this crisis," he does believe that "the refusal of the international community -- in particular, the NATO states -- to decisively act to nip this in the bud years ago" has emboldened Dodik and his supporters. Mujanović pointed specifically at the EU, which he said had been "extremely underwhelming" due to its own internal discord, making the bloc "at this point in many ways a non-factor."

What can be done?

"The international community has a clear mandate to protect peace in Bosnia," said Cidic. "Any escalation of violence in Bosnia could harm them tremendously as they cannot afford a Russia-backed conflict, entangled with Chinese and other interests, on NATO's borders."

But will the West do anything? A NATO official told CNN: "We urge Russia to play a constructive role in the Western Balkans. We regularly see Russia doing the opposite. NATO works to promote stability, security and cooperation in the region. Any outside interference in domestic democratic processes is unacceptable."

Obviously, NATO could only act on the orders of its member states, and there's no indication that anything beyond tough words will come any time soon.

The senior EU official said that there is political will to do something more substantial among some EU member states but acknowledges it will be very difficult to get all 27 on board without some major concessions to countries within the bloc on other issues. 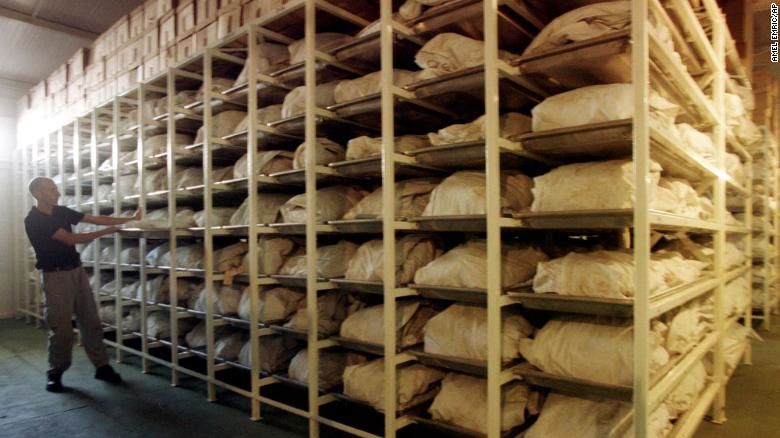 A worker moves a bag of remains exhumed from a mass grave to put into a box at the Tuzla Identification Center in July 2000.

The UN Security Council can't act without Russia, which earlier this week only voted to keep peacekeepers in Bosnia-Herzegovina once the High Representative's name was removed from the text of the resolution, undermining the credibility of that office.

However, there is some reason for hope. Mujanović says that EU member states could "enact unilateral sanctions against" Dodik and his cronies, which he believes would have some impact.

But diplomacy didn't work in the 1990s, and Cidic does not believe it will work now. "This failed diplomatic approach resulted in over 100,000 perished, and over 1.1 million refugees," he said.

That harder approach could be sanctions, combined with treating secessionist moves as a European "security challenge," Helic said. "We have to roll this back. The sooner we do it the better and easier it is. We don't want to wait for years like we did in the 1990s."

It's hard to see the situation in Bosnia-Herzegovina getting better in the immediate future. However, with sufficient political will, powerful actors could prevent it from sliding back into violence.

The question is whether powerful Western nations are too distracted to pay sufficient attention to a state that isn't at the top of their priority list right now -- and even if they're willing to act, whether they might find they're too late.