Ukraine war: Who are the dead Russian military officers and what do their deaths tell us about Russia's operation?

Ukraine has claimed to have killed a number of Russian military officers - here's who they are and what their deaths tell us about Russia's operation in the country.

A Russian lieutenant general has been killed in fighting near the southern Ukrainian city of Kherson, it has been widely reported.

With at least four generals killed during fighting in the city of Mariupol, the invasion of Ukraine is taking its toll on Russia's military leaders.

NATO estimates that up to 15,000 Russian troops have been killed since Moscow opened hostilities last month.

These are the Russian officers thought to have been killed: 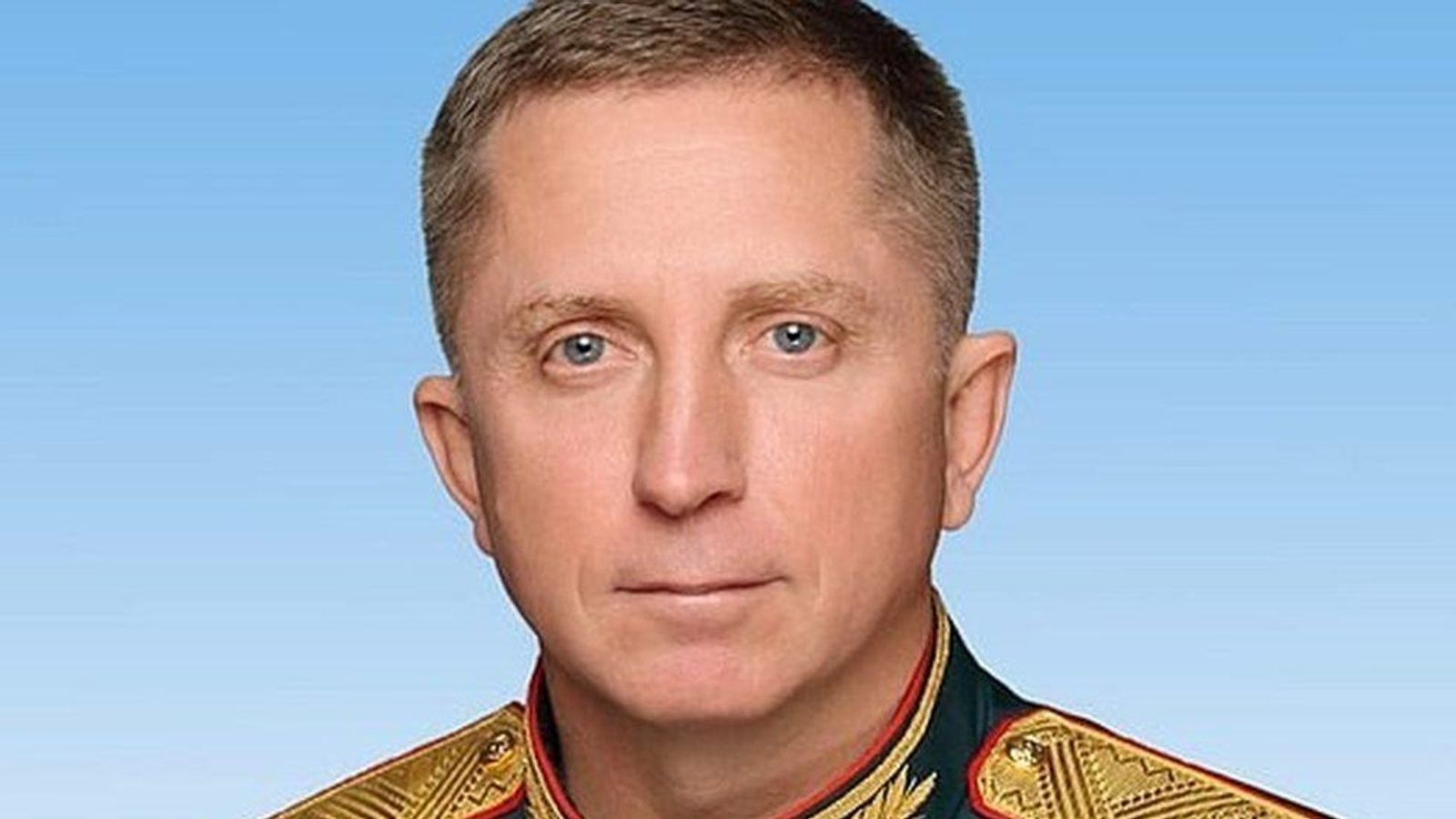 Lieutenant General Rezantsev was killed by a Ukrainian strike in fighting near the southern city of Kherson, it was widely reported.

Ukraine's military confirmed his death on 25 March, but gave no further details.

Oleksiy Arestovych, adviser to the head of President Volodymyr Zelenskyy's office, said: "Over the past day, our troops - as we previously reported and we can now say for sure - killed the commander of the 49th Combined Arms Army of the Southern Military District of Russia, Lieutenant General Yakov Vladimirovich Rezantsev."

Moscow did not immediately confirm the death of the 48-year-old.

Lt Gen Rezantsev had boasted, on the fourth day of the invasion, that the war would be over in a matter of hours.

It is thought his presence close to the front line underlines the poor morale of Russian forces in the country.

Ukraine claimed to have killed Russian Major General Oleg Mityaev during the storming of the besieged southern port city of Mariupol on Tuesday.

Major generals are the lowest of the highest rank in the Russian military, equivalent to the NATO rank of OF-6, or a Brigadier in the British Army. 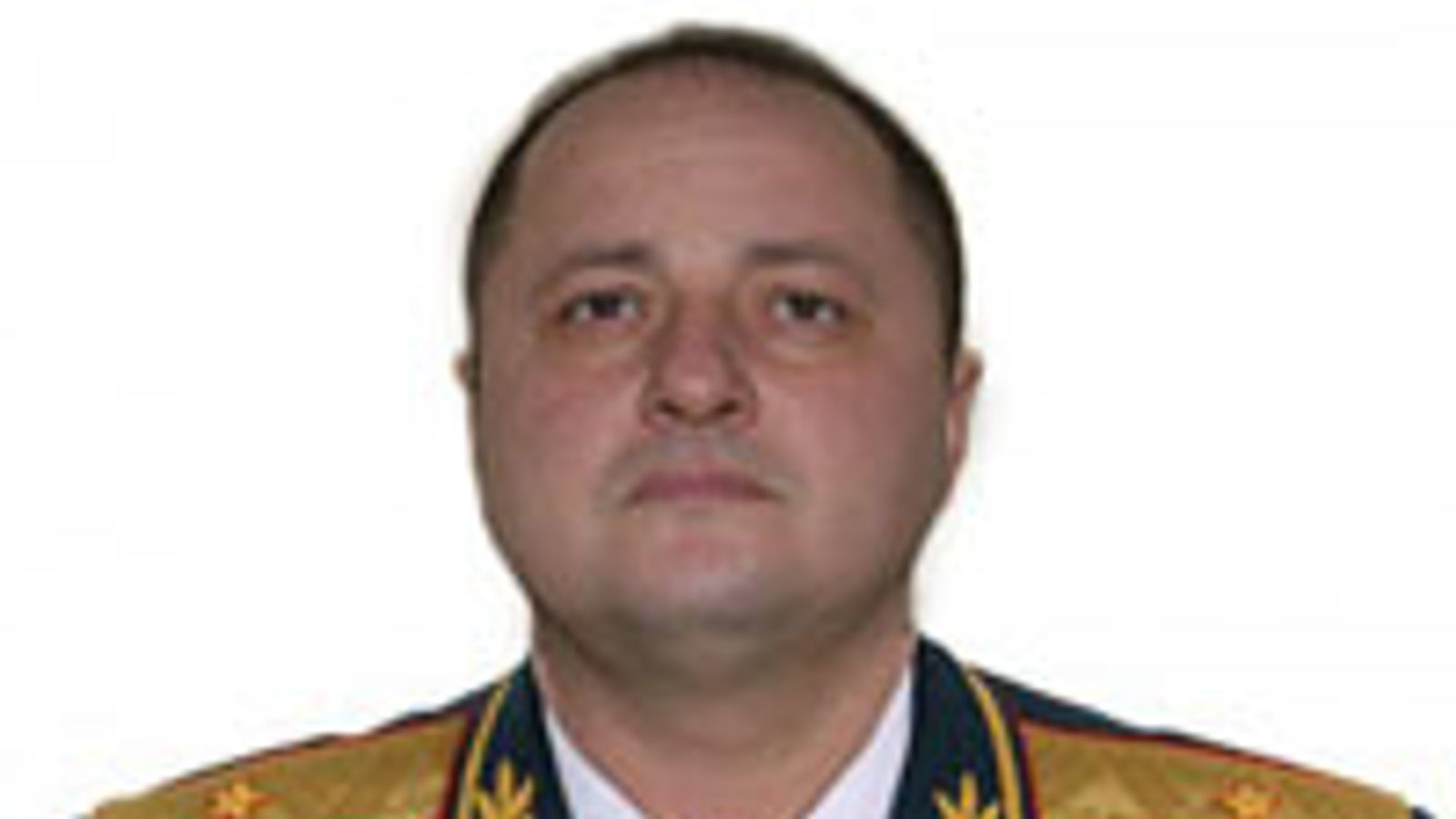 Ukrainian interior ministry adviser Anton Gerashchenko published a photo, of what he said was, the dead officer on Telegram, while President Volodymyr Zelenskyy reported the death of a Russian general but did not name him.

There was no confirmation of the death from Russia.

Ukrainian officials said that Major General Andrei Sukhovetsky was shot and killed by a sniper at the end of February.

Major General Sukhovetsky was the deputy commander of the 41st Combined Arms Army.

His death was reported in Russia by a veterans group on the country's social media platform VK. It was subsequently referenced in a speech by Russian President Vladimir Putin, although the Maj Gen was not mentioned by name.

He had previously served in the Russian military's campaign in Syria.

The death of Major General Vitaly Gerasimov on 7 March was announced by Ukrainian military intelligence based on an intercepted radio call.

He was the first deputy commander of the 41st Army, and was killed outside of Kharkiv, according to a conversation between two FSB officers.

He had fought with Russian forces in Syria and Chechnya, and taken part in the annexation of Crimea in 2014. 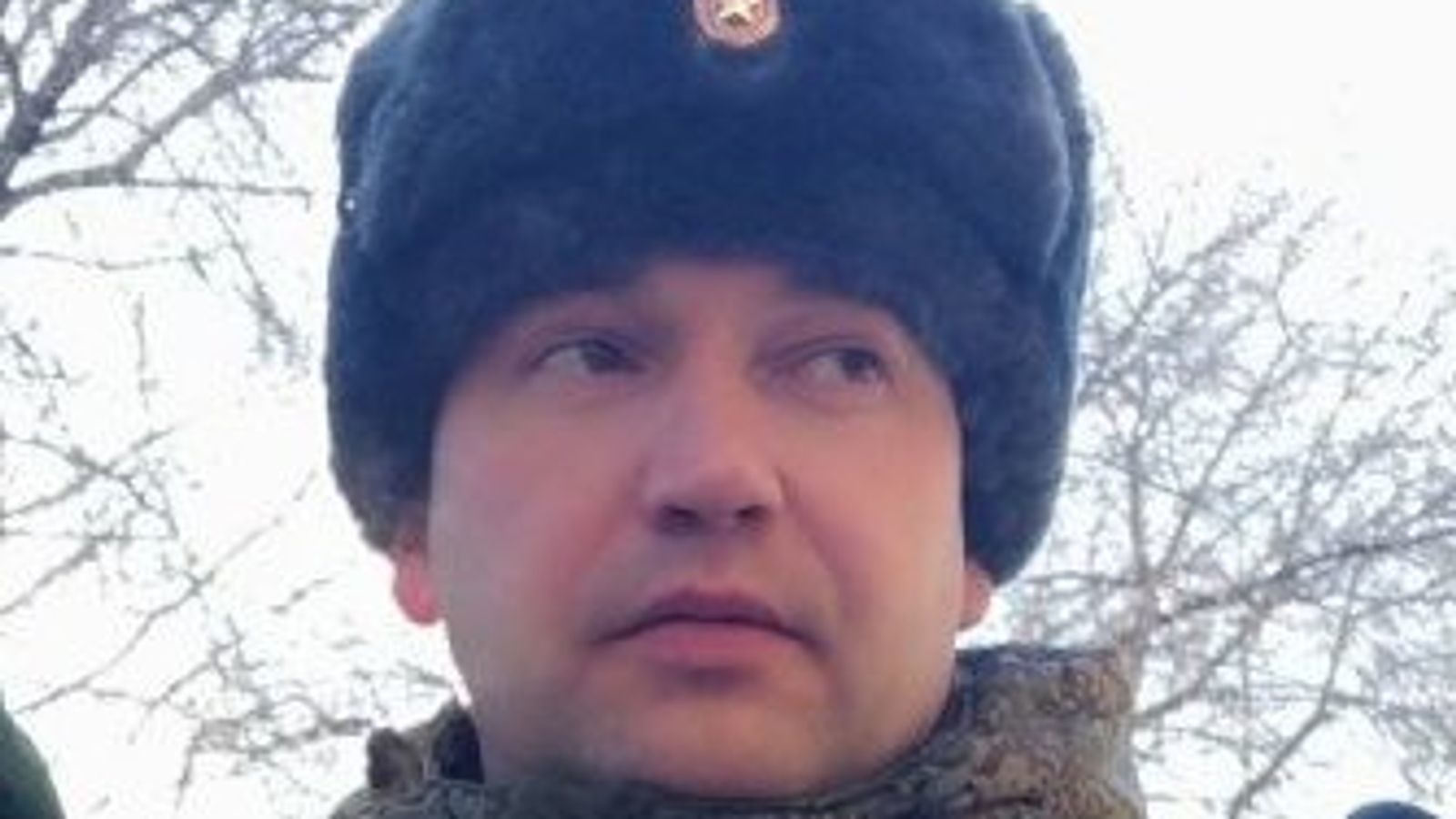 Major General Andrey Kolesnikov, the commander of the of the 29th Combined Arms Army of the Eastern Military District, was killed in fighting over Mariupol on 11 March.

Who are the other officers Ukraine has claimed to have killed?

Colonel Andrei Zakharov, the commander of the 6th Tank Regiment of the 90th Tank Division, was killed near Kyiv, according to the Ukrainian Ministry of Defence.

Ukrainian officials again cited an intercepted radio conversation, released alongside a video of an ambush on the tanks, confirming Colonel Sakharov's death.

The death of Konstantin Zizevsky, a Guards Colonel, was reported on Instagram by Mikhail Vedernikov, the governor of the Pskov region in Russia's northwest.

He was killed during fighting in the eastern regions of Donetsk and Luhansk.

He commanded a motorised rifle regiment, according to a report in the Russian media in Kamyshin.

According to the Ukrainian Ministry of Defence, Lieutenant Colonel Dmitry Safronov, the commander of the 61st Separate Marine Brigade, was killed in an operation to liberate the city of Chuhuiv.

Lieutenant Denis Glebov, the deputy commander of the 11th Separate Airborne Assault Brigade, was also killed during the liberation of Chuhuiv, according to the Ukrainian defence officials.

The Russian news agency TASS said he had posthumously been awarded the Order of Courage.

General Magomed Tushaev was leading a Chechen special forces column when he was killed near Hostomel.

He was the commander of the 141th motorised national guard brigade, and had reportedly been accused of leading a number of homophobic purges in Chechnya.

The death of Guards Colonel Vladimir Zhoga was reported on Telegram by Denis Pushilin, the head of the Russian-backed Donetsk People's Republic.

He reported the officer had been killed in Volnovakha in eastern Ukraine while "engaged in evacuation of civilians".

Guard Colonel Zhoga was the Ukrainian-born commander of the Sparta Separate Reconnaissance Battalion, a separatist force garrisoned in Donetsk.

What do their deaths tell us about Russia's military operation?

Sky News correspondent Alistair Bunkall has said the killing of Russian generals certainly adds credence to the assessment that Russia's invasion of Ukraine is not going as planned.

"Two theories are that the Russian generals went to the front lines to sort out the strategic mess some of the battalions have got themselves in, or to encourage demoralised soldiers to advance," he added.

According to Air Vice Marshal Sean Bell, there are generally three levels of warfare: Tactical, operational, and strategic. 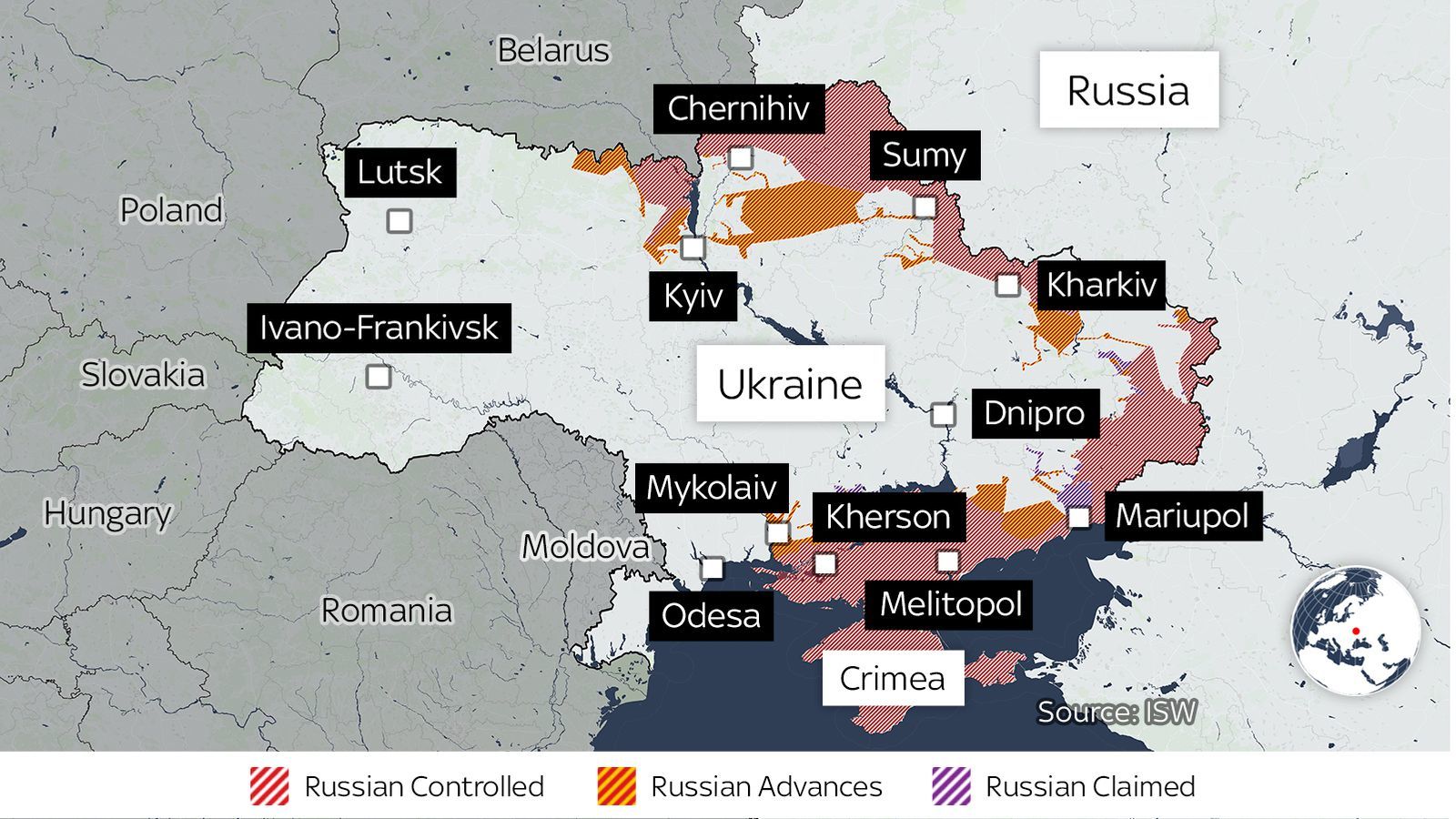 Usually, major generals would be stationed away from tactical warfare, which covers on-the-ground fighting.

"It's evident this war has not been going the way Putin expected it to go," he told Sky News.

"As a result of that, he has clearly got rid of a whole tranch of senior generals, brought in some new ones, and you can only imagine what the marching orders were to them - get to the front and I want to see some action."

Therefore, they are being seen "trying to inspire, motivate, lead, at a tactical level, some of the conscripts and the army" on the front line, he added.

Mr Bell continued to explain that there could be around 20 major generals involved in this campaign but it "wouldn't be at all surprising to see a three-figure number" in the Russian military.