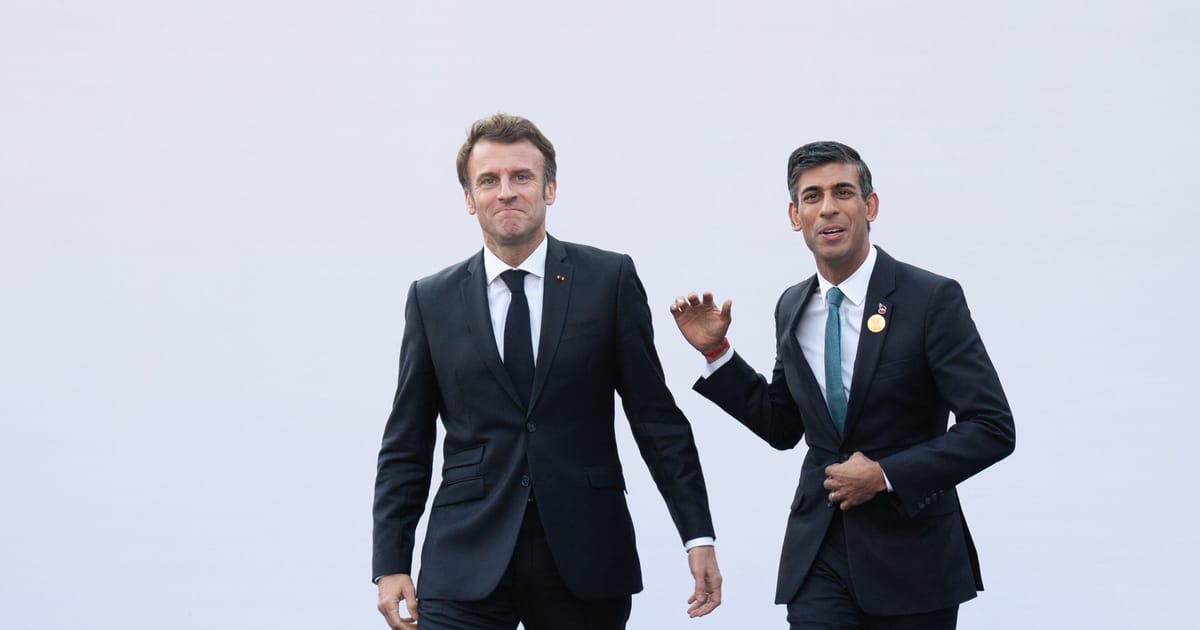 Sunak and Macron: A bankers’ bromance

A new UK prime minister and a deal on cross-Channel migration could herald a reset in Anglo-French relations.

After years — some might say centuries — of bitter feuding, love may finally be blossoming across the English Channel.

It’s still early days in the courting process, but senior officials in both Britain and France are daring to hope that a new Entente Cordiale may be forged between Rishi Sunak and Emmanuel Macron in the weeks and months ahead.

Any modern-day dating app worth its salt would match them immediately. Two slick, wealthy, diminutive investment bankers in their early 40s, with penchants for power, pragmatism and the politics of the center-right. Surely, their top officials whisper, these guys are bound to get along?

“They can compare the size of their bonuses!” joked a senior EU diplomat, noting Sunak’s former life at Goldman Sachs and Macron’s history at Rothschild.

The early signs are good. The all-important first date appeared to go well — a bilateral meeting on the margins of the United Nations COP27 climate change conference in Egypt last week. Macron was sufficiently charmed to invite Sunak back to Paris, just before Christmas, for a conference in support of Ukrainian civil society. Playing hard to get, Sunak has yet to formally respond.

The pair will meet again this week, this time upon the beautiful beaches of Bali, a stunning tropical backdrop for what may prove to be a challenging G20 summit, given the global backdrop. The first formal Anglo-French summit in five years is being planned for early next year.

And on Monday the two sides unveiled a long-awaited deal on cross-Channel migration, after months of diplomatic stalemate under Britain’s previous leadership.

What’s clear is that after a long, tumultuous period following Britain’s decision to leave the EU in 2016, both governments hope to seize the chance for a fresh start provided by Sunak’s arrival in No. 10 Downing Street.

“Sometimes we have been hostages — on both sides — to domestic politics, but our strategic interests are aligned and our response capacities are similar,” a French diplomat said. Thus far, he added, bilateral conversations have been “positive.”

A senior official in the U.K. Foreign Office who knows both men said they were confident the relationship will work.

“It’s not surprising that they would get on,” the U.K. official said. “They are two of Europe’s youngest, freshest leaders and both think that our countries should be working together given the world we’re in. That’s our respective national interests.”

Jean-Pierre Jouyet, a former French ambassador to the U.K., believes the two men’s past careers as bankers and finance ministers will aid mutual understanding.

“The relationship can work, because they’ve had similar paths, they see the markets in a similar way — and because Macron is a lot more right-wing than he was five years ago,” Jouyet said. “They are familiar with the same financial circles — the circles that backed Macron [for president.]”

Upon taking office in October, Sunak was determined to draw a line under the hostilities between Macron and his two predecessors as U.K. prime minister, Liz Truss and Boris Johnson. Johnson and Macron had frequently clashed, while Truss infamously replied that “the jury is out” when asked if Macron was Britain’s friend or foe.

In Sunak’s first private phone call with Macron after becoming PM, on October 28, he “stressed the importance he places on the U.K.’s relationship with France — our neighbour and ally,” according to a Downing Street read-out of the call.

In fact, a government official with direct knowledge of the phone call suggested Sunak made the classic first-date mistake of being a little too eager to please.

Sunak “just so obviously wanted to make it work, it was all a bit desperate,” the official grimaced. “He went straight in there at the start and was like — ‘I just want to say, I see you as a friend, alright? A friend, ok?’ And then he kept coming back to it again and again later. ‘A friend. A friend.’

“In a way I thought Truss’ no-nonsense approach [to Macron] was more effective. It showed how inexperienced [Sunak] is at this.”

If Macron appeared non-plussed by Sunak’s gushing approach, there is no doubt Paris senses an opportunity to reset relations. 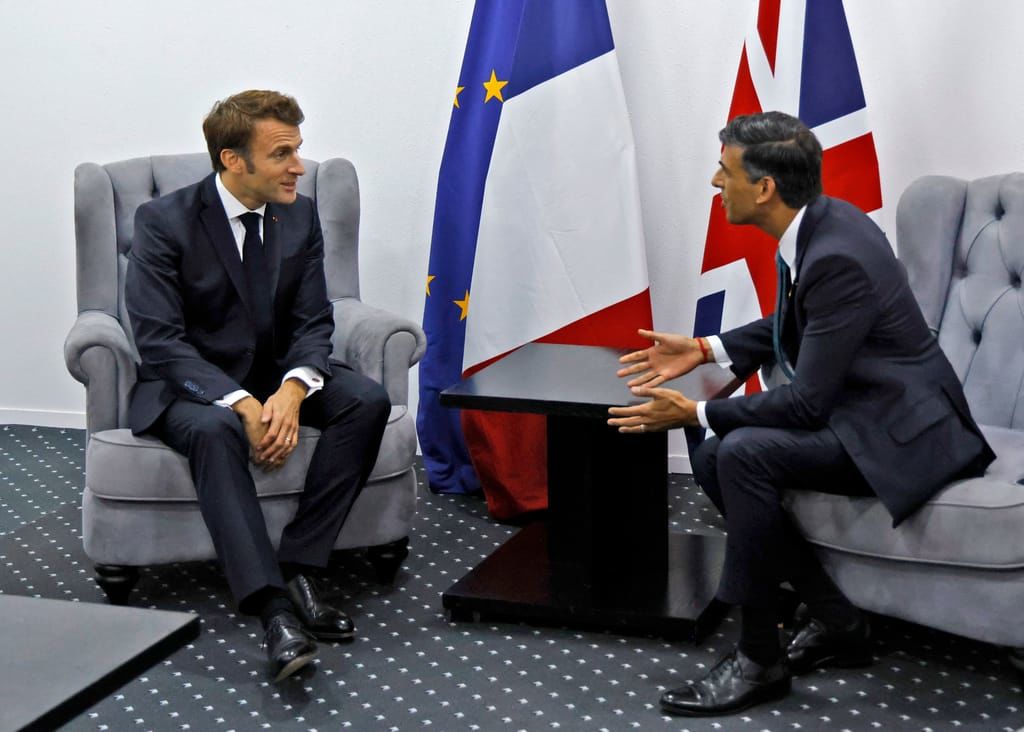 Upon taking office, Rishi Sunak was determined to reset relations with France

What Sunak brings above all is “good will,” said Alexandre Holroyd, a French lawmaker for Macron’s Renaissance party who represents French citizens in the U.K., northern Europe and the Baltic states.

“Under Boris Johnson, the relationship hit rock bottom because he did not want to move forward with the French on anything,” he said. “The first thing Rishi Sunak said was that he wanted to relaunch the relationship … there’s a real opportunity.”

A senior French envoy said it’s too early to be sure how relations may evolve, but pointed to Macron’s offer last week to host the British prime minister in the first quarter of 2023 — the first formal Anglo-French summit since Macron met Theresa May in early 2018. A second French diplomat said officials are still agreeing the agenda, but that Paris believes the meeting can yield tangible outcomes.

There is much for the two sides to discuss. Illegal cross-Channel migration; energy security; and the ongoing row about the implementation of the Brexit agreement all loom large.

On Brexit, the mood music is increasingly positive. The EU diplomat quoted above said Sunak — despite having voted Leave in 2016, unlike his predecessor Truss — is seen across Europe as solutions-focused, rather than as an “opportunist” who belatedly jumped on the Brexit bandwagon to further his career.

Officials on both sides are cautiously hopeful a deal on the Northern Ireland protocol can be done by the spring — ideally in time for the 25th anniversary of the Good Friday Agreement, when U.S. President Joe Biden is expected to fly in.

Cross-Channel migration remains a thorny issue, but a deal on closer working to combat smuggling gangs is hoped to be just the first step in a broader partnership, following successful talks between Sunak and Macron in Egypt.

On energy, the U.K.’s low gas storage capacity makes it reliant upon European partners to send back energy resources in times of need, meaning a diplomatic scramble is underway ahead of what looks like a challenging winter ahead.

Two diplomats from energy-rich European countries said British officials have approached their governments asking for reassurances that they will not halt gas and electricity supplies to the U.K. in the event of shortages this winter, amid fears London might not be able to rely on French energy exports as before.

A reboot of the relationship looks in the interests of both sides.

Jean-Louis Thiériot, a French MP for Les Républicains party, suggested Macron will be keen to boost ties with Downing Street given the difficulties in his relationship with German Chancellor Olaf Scholz. Other diplomats say Macron is simply keen to resolve the multiple outstanding issues in Anglo-French relations.

For Sunak, a close relationship with Paris will prove essential to solve Brexit-related challenges, the EU envoy quoted above said, because of the influence the French president exerts over the European Commission. It was Macron, the diplomat noted, who played a key role in installing Ursula von der Leyen as Commission president in 2019, and the pair remain in close contact.

“Be in no doubt,” the diplomat said. In Europe, “Macron remains the kingmaker.”