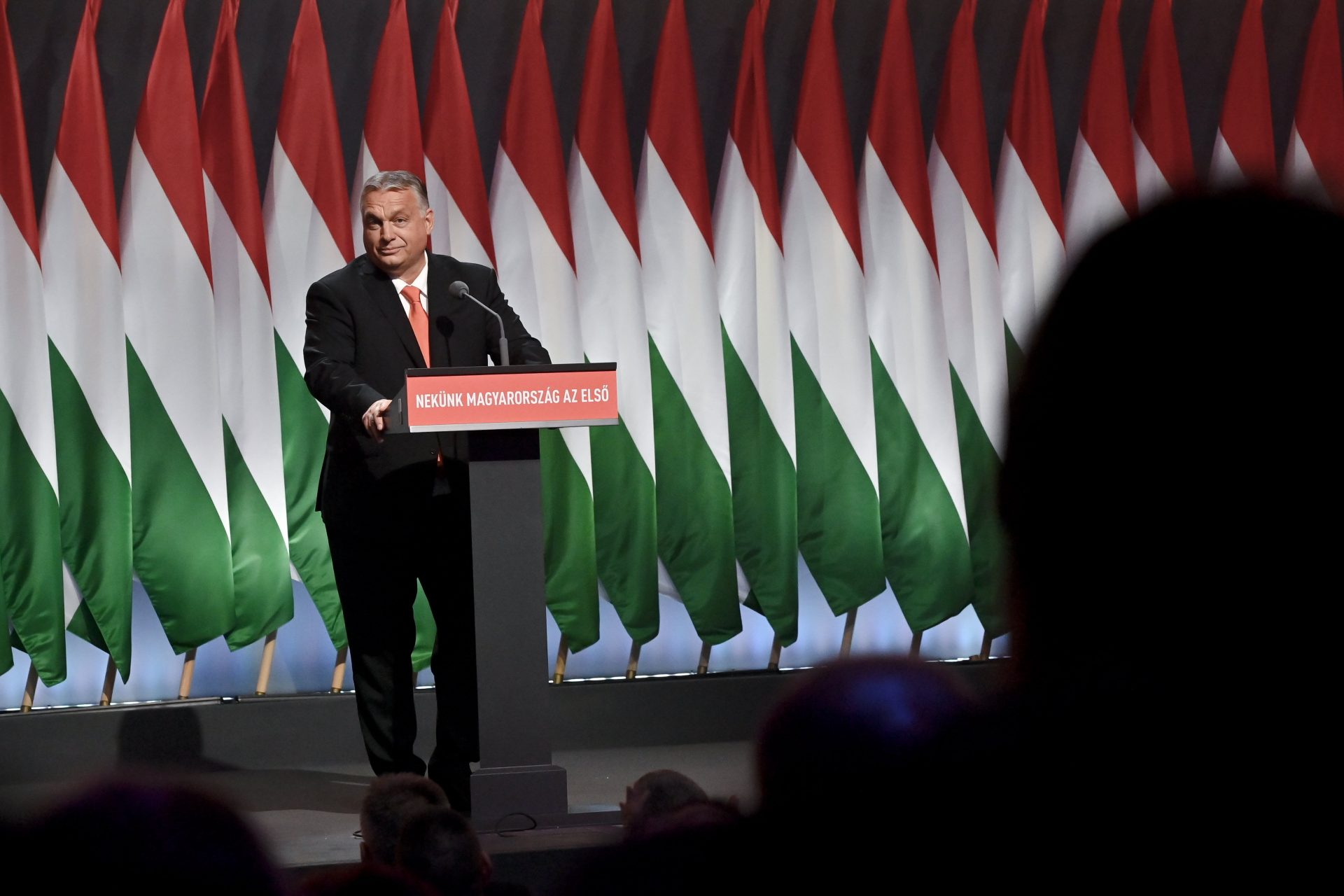 Orbán: 'We will pay the full 13th-month pension'

"In the coming months, we will see things that have not been seen before. It started with the 80,000-forint pension bonus paid to pensioners and will continue with the payment of the full 13th-month pension," Prime Minister Viktor Orbán said at the ruling Fidesz party's 29th congress in Budapest on Sunday.
Young people will not be paying a personal income tax from January, the minimum wage will be 200,000 forints (EUR 548) and the minimum wage for skilled labourers will be 260,000 forints, the prime minister said, adding that members of the military and the police will be paid a six-month bonus. Wages for nurses and those working in the social and cultural sectors will increase by 20 percent. Families will be refunded the tax paid in 2021.

“This has never happened before,” Orbán said.

Fidesz “has remained royal to itself, to Hungary and the Hungarian people” ever since it was established, Orbán said, adding that Fidesz stands for loyalty, faith and trust and it is a loyal party.

“Over the past 33 years, more Hungarians voted in favour of our party than in favour of any other party in the history of Hungarian parliament,” he said.

“This gives me my task, and as long as I, and you also, can, I must and I will carry on doing it,” Orbán said, adding that as long as “loyalty endures” Hungary would endure.

“We are successful, because what Fidesz is doing is its passion,” Orbán said. “We are aiming to reach the top, and that is where we want to take Hungary as well,” he said.

Orbán said that “sixteen years in opposition and sixteen years in government can only be done with unwavering optimism, confidence and deep faith”, adding that Fidesz is a political community the members of which “believe in patriotism and productive life”. He said a government or a country cannot be successful if it does not have clear objectives. He said Fidesz had set clear goals twelve years ago which included creating one million jobs, restoring public order and public safety, protecting pensioners and the value of pensions, giving priority to families, restoring Budapest to its earlier fame, caring for Hungarian communities abroad and standing up for the interests of Hungarians in Brussels, among others.

“We took over a bankrupted country from the Socialists which we revived and put on a growth path,” Orbán said. “This is our moral asset, and this is why we are asking for the support of Hungarian voters again,” he said.

Orbán said that if Fidesz-KDNP can continue to govern, Hungary can make huge progress again in the next ten years and move up to join the group of developed countries. “We can eliminate poverty. We can become a country that is green, healthy, preserves its natural treasures, and a nation that lives longer and healthier lives,” Orbán said.

Others recommend that Hungary should not strive for more, the prime minister said. “We cannot settle for what we have achieved because there are still Hungarians who are poor. There are still not enough children being born. Not everyone has a nice home. Not everyone has a high enough pay or pension. Quite simply, we need more. Why would we settle for what we have?” he said.

Orbán said that security was the most important issue for Hungary as well when the world is faced by challenges posed by migration and a pandemic.

“The most important goal for us is to safeguard what we have achieved so far; we must protect our borders from migrants,” he said. Orbán said that another challenge was plans by “an international network led by Brussels” to levy “brutal taxes” on households, claiming that they should pay the costs of climate protection measures instead of multinational companies, the largest polluters. “The situation is quite worrying in the whole of Europe, and it is particularly dangerous in Hungary because there will be a general election here,” Orbán said.

“Brussels must be completely renewed before it falls to pieces,” Viktor Orbán, the prime minister, said at ruling Fidesz’s 29th congress in Budapest on Sunday.

Orbán, re-elected as the leader of his party, said that the European Union is stumbling from crisis to crisis, “a rainbow-coloured shadow of itself,” and “if it goes on like this, it will waste away like the waning moon”. That is why Fidesz supports the Polish initiative to reorganise the entire European right, he said.

“We must not passively accept every plan of Brussels,” Orbán said, adding that “we want to keep our sovereignty and do not want a United States of Europe instead of integration”.

“We support integration, but not unification,” the prime minister said.

Our goal is to bring about change, “we do not have the slightest intention to exit from the EU, it’s not that easy to get rid of us,” he said, adding that “we will stay and demand change”.

Unification by stealth must be stopped, Orbán said, because that is not in the interest of the people of Europe, but of politicians and bureaucrats and the leaders of multinational companies. “We are opposed to the creation of a new European human race that is politically correct and thinks in multicultural terms, every state has the right to stay out of this just as we have the right to stay out of the great European resettlement scheme disguised as migration,” he said.

He said Western European countries and the United States are gradually losing their role as economic leaders. “This is a new situation, and we, Hungarians have to adapt to that,” Orbán added.

“We have to establish the best possible trade and economic relations with Asia and China.” “Mutual respect, good diplomatic relations, expanding investments, growing trade”: this is the Hungarian interest,” Orbán said.

If a party has found a way to serve not the ideals and ideologies but the people and is willing to act accordingly, it will become a force to reckon with, the prime minister said. “We were able to seize the opportunity: a strong, united party with a serious vision, passion and enthusiasm on one side, and tiny, power-hungry parties on the other side,” he said.

“We believe in work, and that is why we will win,” Orbán said. In recent months, in spite of the pandemic, “we re-ignited the engines” and “the economy is humming”.

“Our programme is backed by an overwhelming majority in society,” Orbán said. “The only question is whether this social majority will become an electoral majority,” he said, adding that “I believe it will if we work hard in the remaining weeks”.

He noted that many people attended the commemoration (of the 1956 uprising) on October 23, but “there will be twice or three times more of us when we turn into the home stretch, … and we will go through the thickest wall and win again, because Hungary must go forward and not backward,” the prime minister said.
Add Comment