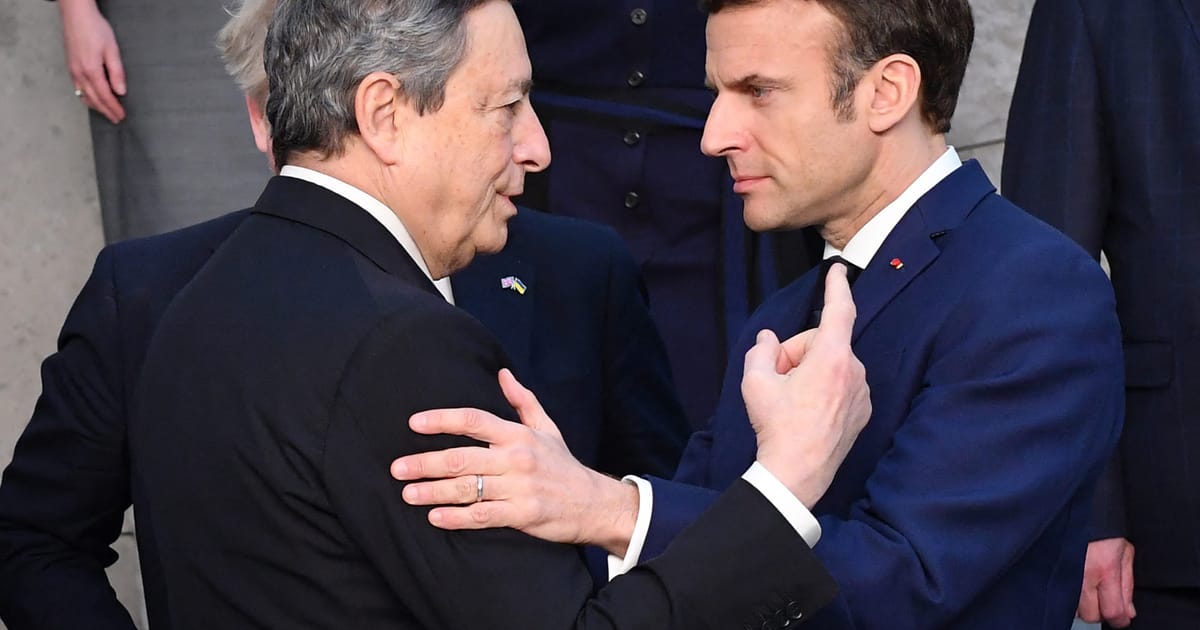 Holy Macroni! The end of the Franco-Italian love story

Giorgia Meloni’s Italy is a problem, according to Emmanuel Macron’s allies. Can they ever work things out?

The Franco-Italian romance — starring Mario Draghi and Emmanuel Macron, once Europe’s power couple — is over.

And the end of the glorious but short-lived love affair could not have come at a more perilous moment for Europe. The stakes for a well-functioning Franco-Italian axis are as high as they can get amid darkening clouds over Europe’s economies that have been battered by soaring energy costs, sky-high inflation and the war in Ukraine.

But the new sheriff in town — Italy’s far-right leader Giorgia Meloni — has a long track record of anti-French positions and her nationalist and conservative background couldn’t be more different from that of French President Emmanuel Macron.

“There is an Italian issue,” said one French official. “The only credible approach is not to blacklist [Italy] — we adopt a more transactional approach.”

The two leaders faced off in Rome in an unplanned meeting Sunday evening, in what was Meloni’s first rendezvous with a world leader since her appointment as prime minister. Looking over St Peter’s dome, from a luxury hotel suite on Rome’s Janiculum hill, on a clear, warm autumn night, the two antagonists in chief attempted to find common ground.

They spoke on a terrazza at the Gran Meliá hotel for an hour and ten minutes, in English, with no advisors or ministers by their side, covering a range of topics including the energy crisis, the war in Ukraine, and the management of migration flows. Talks were “open and frank” but also “demanding,” an Elysée official said. During the meeting, Macron invited Meloni to an official visit to Paris. Meloni’s office later said that they agreed “to continue a collaboration on big common challenges at the European level while respecting each other’s national interests.”

French government sources are less sure of a collaborative future. French officials believe cooperation between the two countries will now be done on a case by case basis. “We are not going to pretend that Italy does not exist,” the French official quoted above said. “We have maintained relations with Trump, it is with the country and not the person that we have relations with.”

A French minister told POLITICO that Paris and Rome could have a common agenda when it comes to support for Ukraine, the energy crisis, and industrial cooperation, but predicted some clashes on civil rights and migration. “Of course it is complicated, because we do not agree on values, but at the same time we are obliged to work on the war in Ukraine and on certain subjects,” the minister said.

The same French minister acknowledged that French plans to include abortion in the EU charter of fundamental rights might also face Meloni’s opposition.

According to three French officials, including Jean-Louis Bourlanges, president of the foreign committee of France’s National Assembly, the major bone of contention will be migration, one of the topics discussed during the Rome meeting. “It is not an easy situation, it is not easy to find the right line, but we have to find it,” the minister said.

The end of the dolce vita

Under Draghi, France and Italy worked hand in hand on key files such as capping energy prices and the upcoming reform of EU’s spending rules. Franco-Italian cooperation might be even more crucial as the Paris-Berlin relationship deteriorates. The EU faces a leadership vacuum which the Draghi-Macron duo filled successfully for a time.

While that era is now history, the future may not be as bleak as some fear.

French officials and Italian politicians told POLITICO some cooperation is likely to continue. Meloni has promised to keep working with France, while making sure that Paris’ interests don’t prevail over Italy’s. In an interview with Le Figaro before the election, she pledged to team up with Paris on EU fiscal discussions or in the fight against the Nutri-Score food labeling system.

But the alliance isn’t without its risks — at least for Macron. Being too close to Meloni might have a political cost at home, where the left-wing opposition is attacking Macron’s government vehemently, including for shaking hands with Meloni.

“There will be agitation when it comes to rhetoric and statements but, as a matter of fact, there will be a need for Macron and Meloni to find an agreement” on files including the reform of EU fiscal rules, predicted Marc Lazar, a professor at Sciences Po Paris and an expert on Franco-Italian relations.

Macron could repel criticism for “normalizing” Meloni by permitting ministers or allies to criticize her while avoiding direct attacks from the Elysée, noted Lazar.

A first example of heated rhetoric came earlier this month, when the French government had another spat with Meloni, over comments by French European Affairs Minister Laurence Boone on the need to monitor the respect of “rights and freedoms” in Italy following Meloni’s rise to power. “Those from abroad who say they want to monitor Italy are disrespecting not me, but the Italian people who don’t need to take lessons,” Meloni told Italian lawmakers on Tuesday.

“Seen from Paris, the rule of law is the competence of the EU and the Commission is applying a procedure. Seen from […] Meloni’s end, this is an undue influence on national sovereignty,” said Sandro Gozi, former Italian undersecretary for European Affairs, now an MEP with Macron’s Renaissance list.

Meloni’s antagonistic stance toward France isn’t new. From Italy’s opposition benches, Meloni attacked Paris on multiple fronts — including on the management of migration issues, its foreign policy in Libya, border disputes and Franco-Italian industrial tie-ups. Her party was the only one to vote against the ratification of the Quirinale Treaty, a bilateral cooperation agreement Paris and Rome sealed last year.

While Sunday’s meeting in Rome seemed to indicate a thaw in relations, positions also remain far apart on issues such as abortion, which Macron wants to make a European right, and the launch of rule of law proceedings by Brussels against Meloni’s EU allies in Poland and Hungary.

During the electoral campaign, Meloni tried to moderate her image and signal to EU institutions and governments that she is someone they can do business with. She sought to avoid direct attacks against EU partners or institutions, and backed Brussels’ efforts on both the energy crisis and the NATO response to Russia’s invasion of Ukraine. As part of this shift, Meloni’s allies now believe that France and Italy could work together on key EU files such as capping energy prices and the reform of public spending rules.

“In general there are more points in common than points of disagreement,” said Nicola Procaccini, an MEP with Meloni’s Brothers of Italy. “Both have high public debt so they are both in the same boat,” he said.